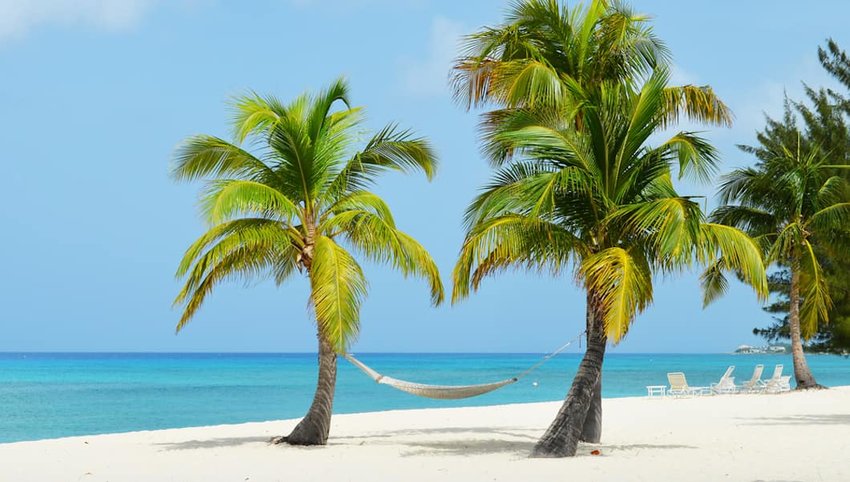 Your Guide to Grand Cayman

A Caribbean island, where Tom Cruise filmed a well-known Hollywood blockbuster, that's famous for its rum cake and Pirate Festival and which also happens to be the 5th largest financial center in the world? Welcome to the Grand Cayman!

Grand Cayman is the largest of the three Cayman Islands which are located between Jamaica and Cuba. Its much smaller and lesser-known sister islands are Little Cayman and Cayman Brac, and together they make up an autonomous British Overseas Territory ruled by the Queen. The Cayman Islands were discovered by Christopher Columbus during his fourth voyage to the New World in 1503. Columbus named them Las Tortugas, Spanish for turtles, for the masses of turtles residing on their shores. Legend says that when his ships were approaching the land, the crew noticed large boulders on the shore, but as they got closer, they realized those boulders were giant turtles. The ample supply of turtle meat made Cayman Islands a popular port for ships, but it took the first permanent settlers, who came from the British Army in Jamaica, another 100 years to arrive.

Today, Grand Cayman is a major cruise ship port and a popular tourist destination known for its beaches, superb diving and tax-exempt status. You will also find world class dining, boutique shopping, buzzing nightlife and some of the friendliest people you will ever meet. Here's an inside look at the best things to do while visiting Grand Cayman.

Grand Cayman’s most famous stretch of sand is called Seven Mile Beach. Oddly, despite the name, its actual length is just a bit over 6.3 miles. A rounding error perhaps? Regardless of the exact measurements, Seven Mile Beach is the most popular and developed area of Grand Cayman and home to the majority of the island’s luxury resorts and hotels. No matter where you are staying, you can walk its full length since the beach is public or just pick a spot to bask in the sunshine and work on your tan. Up for some water sports? Snorkeling, parasailing, banana boating, kitesurfing, stand up paddle-boarding, you’ll find it here! Because it's located on the western part of the island, Seven Mile Beach is also a superb spot for taking in one of Grand Cayman’s spectacular sunsets.

Not too far from Seven Mile Beach is the Grand Cayman Turtle Center, the island’s largest tourist attraction, which welcomes more than half a million visitors each year. The facility was originally established as a turtle farm, used for breeding the endangered green sea turtles for commercial purposes. Its main purpose was to help reduce overfishing due to human consumption which, over the years, drove the species to dangerously low numbers

Not without controversies and ongoing attacks from the animal welfare and conservation groups, the Grand Cayman Turtle Center is still in operation as a farm for raising turtles, but it also serves as an important research, conservation and education facility. Visitors are allowed entry to turtle breading and feeding tanks. You will also find a 23-acre park, which includes a nature trail, an aviary and a reef lagoon where visitors can snorkel with fish, green sea turtles and other sea life.

Turtles are not the only special marine animals found on Cayman Islands. At Stingray City, home to Grand Cayman’s gentlest and friendliest citizens, you can find fevers of stingrays. Yes, that’s what groups of stingrays are called. Apparently, stingrays began gathering on the North Sound of the island decades ago when fishermen returning from fishing trips cleaned their fish in the calm waters of the sandbar area. The fish guts and squid were thrown overboard and the stingrays soon started to congregate at this all-you-can-eat buffet.

Stingray City is another big attraction for visitors to the Cayman Islands or passengers from cruise ships who dock on the island for the day. When planning your visit, try to avoid large, impersonal excursions, which can feel rushed and leave you disappointed. Instead, choose one of the smaller adventure companies like George’s Water Sports. I had a fantastic, personalized and intimate experience during my last trip to the island.

Scuba or Sail Away

If you are into diving, you probably already know that Grand Cayman is listed as one of the Top Five Best Caribbean Shore Diving Destinations, but scuba novices should know that there are plenty of beginner spots as well. The island is home to dive sites for people of all skill levels including shallow options (such as Stingray City) and deep dives (such as the famous Babylon). Grand Cayman is planning to license 365 dive sites, one for each day of the year!

Those preferring to stay above the water can choose sailing, another popular activity on Grand Cayman, which has a strong recreational sailing community. Take a lesson, hop on a boat for a day of adventure on one of the two neighboring islands or simply chill on a romantic sunset cruise. Red Sail Cayman sunset catamaran cruise will take you along Seven Mile Beach and have you enjoying hors oeuvres, a cocktail (or two) and some lovely island beats while the sun disappears beyond the horizon.

Despite the islands' reputation as tropical heaven, you can visit Hell in the Cayman Islands. The attraction is an area consisting of group of black lime stone formations. The name stuck because the black stones made the area look what hell must be like. It has its own post office painted bright red with “Welcome to Hell” written on it from which you can send postcards “from hell”. Greeters welcome visitors with “How the hell are you?” or “Where the hell are you from?”.

The Pirate Festival is Grand Cayman’s biggest and most famous event, taking place on the island for a week every year in November. The festivities begin on Cayman Brac and then move on to Grand Cayman. There are parades, games, fishing tournaments, fireworks and even a mock pirate invasion with capture of the Governor. The event culminates on Little Cayman with a big farewell BBQ. Fans of Pirates of the Caribbean won’t want to miss out, but make sure to book your trip well in advance due to the event’s popularity.

No surprise, the Cayman Islands restaurants are known for their seafood and Caribbean influences such as “jerking”, which involves slow-smoking meat with a spice blend. There are many casual joints with delicious local fare such as the famous Pepper, known for live music, energetic mix of tourists and locals and incredible jerk chicken, which will have you licking your plate. Another good option is Kaibo, located at Rum Point and perfectly positioned for sunset viewing. The list of world class dining establishments representing both local and various international cuisines is equally long. Many of them are run by famous chefs such as Roy Yamaguchi, who recently opened Eating House 1503 (the year Columbus discovered the Cayman Islands) at the newly refurbished and greatly underrated Margaritaville Beach Resort. Popular restaurant spots, be it casual or refined, fill up quickly, so it pays to make a reservation ahead of your visit.

Given their location in the Caribbean, the Cayman Islands are a year-round sunshine destination. The coldest month is January with an average daily temperature of 77˚F (25˚C). The best weather is during the winter season, December through April. Summer months bring more rain, humidity and the hurricane season (June - November). The last point should be a serious consideration when planning your visit as the Cayman Islands have experienced the most hurricane strikes in history.

The Cayman Islands have their own currency, the Cayman Island Dollar (CI$), which is tied to the U.S. dollar and does not fluctuate from it. The exchange rate is CI $1.00 = US$1.25. Since they are a British Territory, keep in mind you will be driving on the left if you happen to rent a car. Most stores, even many of those in touristy areas, are closed on Sundays, so plan your shopping accordingly.