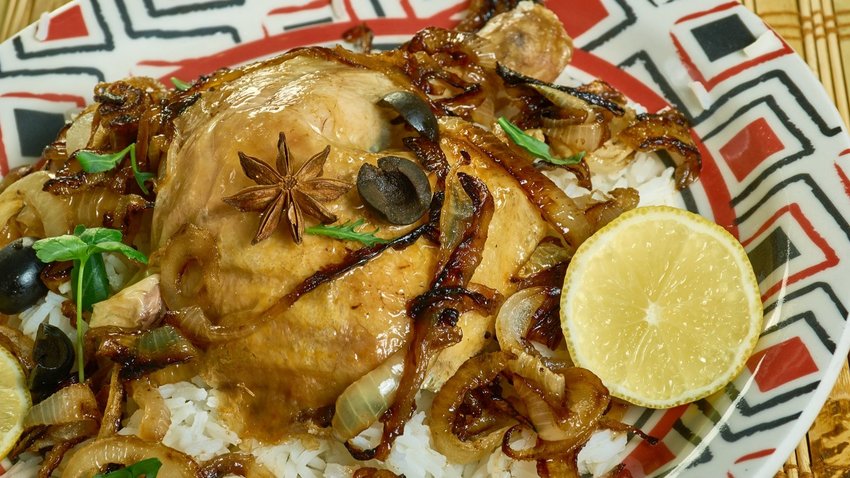 Eating in the West African country of Senegal is a communal affair, and yassa poulet is a favorite dish. The dish is served in a single, large bowl, from which it is shared by a family or group of friends. So why not practice making this simple dish with your family while we’re still social distancing, and invite your friends over for a Senegalese feast when this is all over?

Where Does Yassa Poulet Come From?

Yassa poulet originates from the Casamance region of southern Senegal, in West Africa, but its appeal crosses modern borders. Directly to the north of Cassamance is the neighbouring country of The Gambia, where yassa is also very popular.

Casamance is bisected by the river of the same name, and the fertile soil near the river has been well suited for growing both lemon trees and onions, both of which are prevalent in yassa. Rice is grown elsewhere in Cassamance, and is the perfect accompaniment for yassa poulet, as it soaks up the lovely sauce in which the chicken is cooked.

Sourcing the Right Kind of Chicken

Another surprise might be the local name for the type of chicken that’s considered best: poulet bicyclette, or literally, bicycle chicken. The term is used not just in Senegal but in other French-speaking countries in the region, such as Burkina Faso and Mali. It actually refers to a bird that has had the freedom to roam around, running here and there around the villages in search of scraps to eat. Such a chicken has a jerky gait and is always on the move, which is where the nickname comes from.

West Africans distinguish between this and the inferior poulet cadavre, which translates as corpse chicken, a standard farm-reared bird pumped full of hormones. Though it might look plump and full of potential, the commercially grown bird lacks the intensity of flavour that its skinny, lean rival can bring to a dish.

Obviously, you’re not going to source an actual poulet bicyclette from West Africa for your dish, but if you’re able to source free range, organic poultry from your local butcher, it’ll be worth the effort and expense.

How To Cook the Perfect Yassa Poulet

Sourcing ingredients to make yassa poulet outside Senegal is pretty straightforward – most are widely available. You’re going to need a whole, free range chicken which you should de-bone and chop into large pieces. To make the marinade, thinly slice four onions and squeeze the juice of four lemons. Mix with four tablespoons of peanut oil and two tablespoons of strong mustard. Season with salt and pepper and rub the marinade into the chicken pieces. Place in a covered dish and refrigerate, preferably overnight.

Grill the chicken pieces until golden brown on the outside. Transfer to a deep frying pan with a lid. Mince three cloves of garlic. Stir in at least another four thinly sliced onions (it looks like a lot, but they cook down, so you might want more), frying off very slowly in peanut oil so that they caramelise but don’t burn. Some cooks suggest these onions should be cooked for a few hours, stirring every fifteen minutes or so to achieve the best results. Regardless, the onions must be soft.

Next, pour in a tablespoon of red wine vinegar, stir in one more tablespoon of mustard and a crumble a couple of chicken stock cubes over the top. Mix. Sauté over a medium heat for about five minutes and then add a glass of water.

Chuck in the grilled chicken, add some chopped chilli peppers to give the dish some heat, and a few ounces of green olives. Cook on a medium heat for another few minutes. Turn down the heat and simmer gently for at least 40-45 minutes. Time it so that your rice is cooked just before you’re ready to serve. There should be enough to feed about six people.

How To Eat It

Transfer the yassa poulet into one large serving dish (you could even dust off your paella pan and use it for this purpose) and place it in the center of your table so that all diners can reach it. If you want to stay true to Senegalese tradition, try to eat with only your right hand, never the left (which is considered unclean). Squeeze some rice, chicken and sauce together against the side of the dish until it is compact enough to pop into your mouth. It’s also perfectly acceptable to use a spoon. Whichever method you adopt, you should only eat from the part of the bowl that’s directly in front of you. It’s polite not to leave any leftovers – but with a dish this tasty, that shouldn’t be difficult.