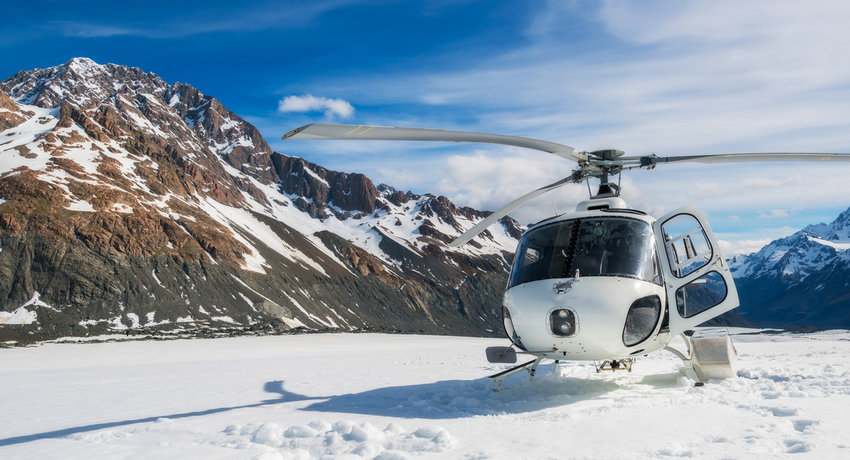 Want to dabble in something new this winter? While skiing and snowboarding still dominate the winter sports activity lists, there’s a whole spectrum of fun activities that will tempt you to get out and enjoy this picturesque time of the year. From running in the North Pole to spotting exotic animals and whizzing across snowy fields at break-neck speeds, we’ve compiled a list of adventures for all ages and adventure levels.

What better way to appreciate stunning winter landscapes than stepping onboard a sleigh and being pulled by a team of huskies? The vast wildernesses of Greenland and Canada’s Yukon Territory are great places to try it and Ely, Minnesota is often called the Sled Dog Capital of the United States. Skijoring is a variation of dogsledding, which involves being pulled by a horse or dogs while you are strapped to a pair of skis. Watch races at Jackson Hole Mountain.

Ever get the urge to venture off marked trails and carve up on remote backcountry slopes? Then climb aboard a helicopter and fly high above the mountains to areas of unimaginably pristine snow and sometimes never-before-skied terrain. Heliskiing is becoming popular the world over but is notably impressive in Argentina, Canada and New Zealand. You can also go for the ultimate adventure closer to home with an Alaskan heli-ski tour.

Imagine some of your favorite rock climbing destinations and then add snow and ice to them. You’ll be using your crampons and ropes to ascend cliffs and rock faces draped in a blanket of ice and even frozen waterfalls. Many ski resorts offer lessons for those that haven’t attempted this before. Give it a go in Johnston Canyon, Banff.

Great to do with kids, a romantic idea for a date or a fun field trip with friends after a few drinks — ice skating is a fan favorite. Whether it be at the Rockefeller Center in New York, in the shadow of Half Dome in Yosemite National Park or at the Tower of London, ice skating can be enjoyed by everyone, everywhere. Best of all is that nobody cares if your skating ability is more Bambi than Olympiad Michelle Kwan.

Here’s an activity with the serious athlete in mind. If you like to run, and do so in the cold, then you’ll be tempted to race across the frozen Arctic Ocean. With so much snow on the ground, you might also need to swap your running shoes for a pair of snowshoes. Sound good to you? Sign up for the North Pole Marathon if you dare.

If you’ve been skiing and snowboarding before then chances are that you’d love to have a crack at ski biking. Just think of it as changing your mountain bike wheels for skis and then using your feet as breaks by digging them into the snow. Winter Park Resort in Colorado is a great place to try it and there’s guided tours for anyone aged 14 and over.

Prefer to let someone else do the work for you? A snowcat is essentially a truck with tank tracks that can plow through deep snow at speed. All you need to do is sit back and enjoy the beautiful mountain countryside. Our recommendation is a mountaintop snowcat tour at Whistler Blackcomb followed by a candlelit fondue dinner.

This is one for the true and fearless adventurers among us and one that should be carried out with experienced guides. You’ll drop down into an icy lake or river by breaking through its frozen surface, and return via the same hole to avoid disorientation. Beneath the surface an eery silence and unseen watery wilderness await. Russia’s Lake Baikal and Canada’s Conception Bay are both popular for under ice diving.

Just like us humans, many animals prefer the colder months to warmer summers, therefore winter is the best time to spot them. Maybe you want to see the Nagano (Japan) snow monkeys playing in hot springs or grizzly bears roaming the forests of Yellowstone National Park. Watching the rare Northern Atlantic whale on their winter migration from Canaveral National Seashore is perfect for a non-snowy adventure.