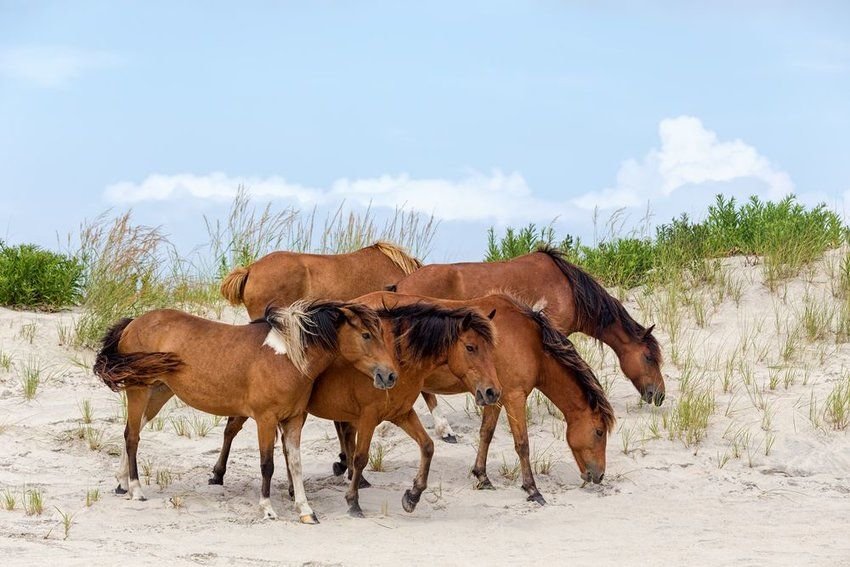 When I was 11 years old, I made a deal with my parents that if I did all my chores perfectly for a month I could go to Assateague Island and see the wild horses. To my parents’ surprise, I fulfilled my bargain and my dream trip came true. Yearly visits to Assateague Island National Seashore and nearby Chincoteague are now a long-standing family tradition.

Imagine ponies running free on the beaches of their own windswept island and cooling off in the surf. That is what you'll find on Assateague Island National Seashore, a barrier island off the coast of Maryland and Virginia. The island’s lucky ponies are cared for by the volunteer fire company of the local community who attends to their health, but leaves the horses to enjoy their life in the wild.

Once a year, in late July, the herd of Virginia ponies is rounded up to swim across the narrow channel from Assateague to Chincoteague at low tide, escorted by saltwater cowboys riding into the water.

This July marks the 94th season of Pony Penning, the biggest event of the year on Chincoteague Island, Virginia, and a tradition dating back to 1925. This annual week of events includes the Pony Swim across the channel between the islands, the Fireman’s Carnival, and the famous Pony Auction. People of all ages look forward to the festival, some excited to bid on their own “Misty” foal to bring home.

Anyone who ever read Misty of Chincoteague, the iconic children’s book by Marguerite Henry, knows the story of this annual roundup. The book, originally published in 1947, made the event and surrounding community internationally famous. The story of the wild pony Phantom and her foal Misty became an instant classic, enjoyed by generations of families, many of whom make the trip to see Pony Penning first hand.

After their short swim, the ponies come ashore on the east side of Chincoteague Island and onto Pony Swim Lane, where they rest before being herded by the saltwater cowboys through town to the carnival grounds. There, the ponies relax and await the next day’s auction.

This is a rare opportunity to see the horses so close. According to the National Park, Assateague’s most famous residents are actually feral animals, descendants of domestic creatures that have reverted to a wild state. These horses have developed the toughness necessary to live with heat, storms, and mosquitoes, and learned to forage for their own food from dune and marsh grasses and drink from freshwater ponds. The ponies on this remote, barrier island have formed a unique wild horse society. Park visitors are asked to enjoy their beauty from a distance in order to make sure these extraordinary wild horses will continue to thrive.

The annual Pony Auction not only provides a source of revenue for the Chincoteague Volunteer Fire Company, it also helps them manage the herd by trimming its numbers and preventing overpopulation on the island. This ensures the ponies have enough resources and enables them to retain the permit to graze on the refuge since the herd must not exceed 150 horses. The fire company also uses some of the auction proceeds to provide veterinary care for the ponies throughout the year.

The History of the Ponies

Assateague Island has been home to wild ponies for hundreds of years, but there are different origin stories for how they got there. The more romantic version imagines that they are descendants of the survivors of a Spanish galleon that wrecked off the coast of Assateague. There is record of a galleon, La Galga, blown off course by hurricanes in 1750. This tale is a persistent legend still believed by many.

The more likely story is that they are descendants of horses released by early settlers onto nearby Assateague to graze. Mainland farmers in the late 17th century were known to move horses to barrier islands to avoid fencing laws and taxation of livestock. However they got there, the ponies have adapted well to their wild island life.

After several disastrous fires in Chincoteague, the town recognized the need for better fire equipment. In 1925 they authorized the Chincoteague Volunteer Fire Company to hold a carnival and auction to raise funds. The event was a huge success. The revenue from the Fireman’s Carnival and other Pony Penning events enabled the fire company to modernize. As word spread, the event grew, and today attracts more than 50,000 visitors. Spectators come from all over to watch the Saltwater Cowboys swim the pony herd from Assateague to Chincoteague.

When and Where to Go

If you decide to go, the most popular viewing area is at Veterans Memorial Park, where it’s possible to get a view of the swimming ponies. There is also a large screen in the park with a live feed. Be prepared to stand, as there's no seating. It’s also a good idea to have the right footwear, since you’ll be standing in marshland and conditions will be crowded. Wake up early if you hope to have a good spot. The best way to see the pony swim up close is on a chartered boat. These coveted seats are in high demand, so be sure to reserve your place several months in advance.

Pony Penning is always at the end of July, with roundups on Saturday and Sunday, the swim on Wednesday, and the auction on Thursday. Then on Friday the adult ponies make the return swim to Assateague Island where they will live in the wild for another year.

Plan ahead now. You won’t want to miss this long-standing tradition. Be careful; you might come home with that pony you always wanted.