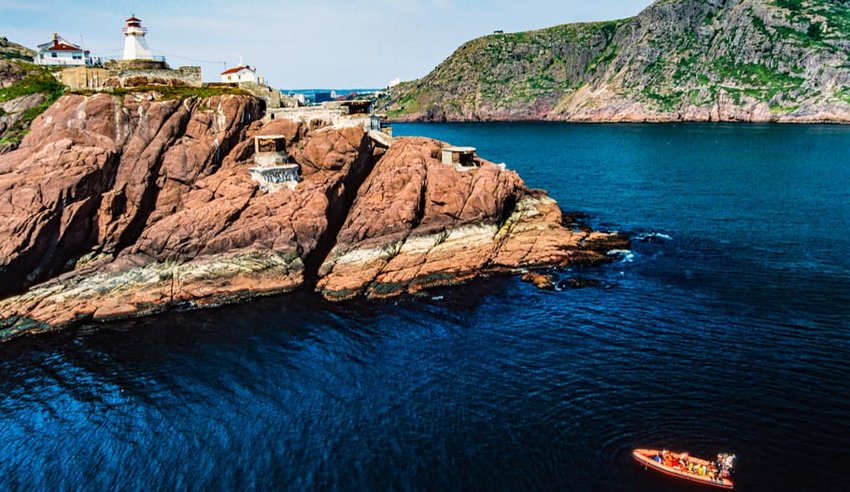 Why You Need to Visit Newfoundland Right Now

Newfoundland is Canada’s easternmost wilderness, a remote island that astounds all who lay their eyes upon it. It is one half of the Newfoundland and Labrador province, the half where colorful European towns and Viking settlements sit nestled between dramatic coastal and mountain landscapes.

Comparable to Iceland in both size and geographic features, Newfoundland also bears similarities to Norway and Scotland. There are miles of hiking trails to explore, adventures on land and sea, unrivaled wildlife spotting and a mouthwatering culinary scene. If all that sounds tempting, then here are a few of the many reasons why you need to visit Newfoundland right now.

Forget what you were taught in school because Columbus wasn’t the first European to set foot in the Americas. Back in about 1000 A.D., Norse explorer Leif Erikson, who was incidentally the son of Erik the Red, sailed his crew to a place then known as Vinland. They only stayed for a year but you can walk in their footsteps at L'Anse aux Meadows National Historic Site, exploring the ancient, grass-covered dwellings they left behind.

At the other extreme of the island, 500-year-old British seaside traditions prevail alongside contemporary lifestyles in the colorful provincial capital St. John’s. Lighthouses and a castle or two dot the coast along with brightly-colored fishing huts.

Glaciers once covered the entire northern section of the island and there’s fascinating evidence of this at Gros Morne National Park. Hike numerous trails, marveling at the glacier-carved valleys and wildflower covered meadows. A boat ride on Western Brook Pond (actually a fjord), where curious rock formations plunge deep into icy waters, is a must.

Head to the east coast between late-May and early-June to watch as colossal blocks of ice make their way from Greenland via the Iceberg Alley. Strap on your best walking boots and set off on some 300 trails, which take you from forested mountain slopes to a coastline peppered with sea stacks and secluded beaches. The East Coast Trail skirts the shoreline of the Avalon Peninsula, a region voted among National Geographic’s top rated coastal destinations. Looking for more? Find 560 million-year-old fossils at Mistaken Point Ecological Reserve and learn about the island’s geology at Johnson Geo Centre.

From bears to puffins and migrating whales, varied wildlife inhabits all corners of the island and its coastline. Humpback and minke whales arrive from mid-May through September and are best seen by boat tour and from Bonavista. Departing from Bulls Bay, O’Brien’s Whale and Bird Tours run award-winning excursions that bring you within arm’s length of the breaching aquatic beauties.

Bird lovers will delight in the Atlantic puffins and other seabirds that visit places such as Cape St. Mary's Ecological Reserve, Elliston and Saint Mary’s. Back in Gros Morne National Park, caribou and moose are happy to pose for your envy-inducing photos. Add Terra Nova National Park to your list of things to do and you could stumble across the odd bear and coyote.

Newfoundland’s coastal riches make it haven for seafood and wherever you go you’ll spot fish and brewis on the menu. This hearty meal combines salt cod with hardtack crackers. Order a plate with scrunchions (fried pork rind) for the complete finger-licking experience.

Yet, this barely scratches the surface of the island’s unique and curious culinary scene. Start your days with a touton, which is a pancake-like donut served with molasses. Fill up on a Jiggs’ Dinner, a comforting one-pot winter classic that combines beef, cabbage, potatoes and root vegetables. In September, bakeberries (aka cloudberries), blackberries, partridgeberries and other wild berries can be foraged and sampled while you are out hiking. Alternatively, try them in a pie at the nearest cafe. Wash it all down with a pint of beer brewed using iceberg water ay the Quidi Vidi Brewery Co. Fancy dining in a lighthouse? Check out these food festivals and events for delectable delights.

It may seem worlds away from the mainland, but getting to Newfoundland isn’t the mammoth task that you might expect. Fly into St. John’s from Halifax, London, Montreal and Toronto or catch a ferry from Nova Scotia to either Argentia or Port aux Basques. Get here in true road tripping style by cruising the Route Jacques Cartier highway through Quebec, jumping on the ferry to Saint Barbe and then exploring the island along the captivatingly scenic Viking Trail and Trans-Canada Highway.