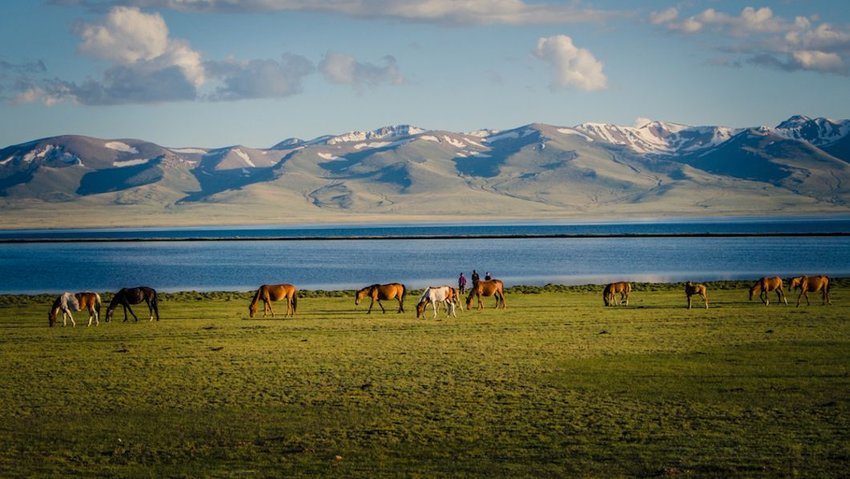 When I returned from Kyrgyzstan earlier this summer, the immigration officer asked where I’d been. Mishearing, he echoed, “Kurdistan?” and when I corrected him, he told me that he didn’t know where Kyrgyzstan was. He’s not alone. Most of my friends and family hadn’t heard of the place either. Yet, this amazing Central Asian nation could be the lovechild of Switzerland and Mongolia with its incredible Alpine scenery and warm nomad hospitality. Here’s why Kyrgyzstan should be on your bucket list.

The Views Are to Die for

Charge up the camera batteries and don’t expect to sleep on the bus — this is one of the world’s most beautiful countries and you aren’t going to want to miss a thing. Each landscape you pass through will be more breathtaking than the last. That said, many of the best views are seasonal. Song Kul, an Alpine lake sitting at an altitude of 3016 meters, is reached via mountain passes that don’t open until late May. Early in the season it’s a challenging drive on gravel roads whitened by snow and ice, but the rewards of jaw-dropping views and meadows strewn with early-blooming flowers more than compensate.

A little later in the season, nomads load their yurts onto trucks and set up camp by the lakeshore. There are few places more special to spend the night. Reaching other parts of the country, such as Ala Kul lake, can involve multi-day hikes, but hire a knowledgeable guide and you’ll experience one of the best treks of your life.

It's Still Off the Beaten Path

Russian and domestic holidaymakers have long homed in on the capital Bishkek and Issyk Kul, the country’s largest lake. Pretty much everywhere else in the country, however, you have a good chance of finding solitude, particularly if you avoid the high season months of July and August.

Ala-Archa National Park is a mere thirty-minute drive from Bishkek but hike along the riverbank into this dramatic canyon and you’ll barely see a soul. Venture south to the ancient caravanserai of Tash Rabat. Despite it being a UNESCO World Heritage site, visitors are few in number thanks to its distant location. You’ll find it down a valley only recently connected to the main road network by a bridge. Its thick stone walls would once have housed Silk Road merchants, but today if you time it right you could enjoy the privilege of having it to yourself.

It’s a point of honor amongst the Kyrgyz people to ensure that visitors enjoy a warm welcome and as the problems that inevitably accompany mass tourism have yet to materialize, that hospitality is genuine. Everywhere you go, the yurt owners and hoteliers that host you will go out of their way to ensure you are comfortable. Nothing is too much trouble, even popping another log on the fire in the middle of the night in case you might start to feel cold. Meals are never simple affairs. Tables laden with fruit, bread, pastries and fresh produce are another example of how the Kyrgyz like to ensure their guests are well looked after.

There’s Plenty to Do and See

The enormous variety of things to do in this Central Asian nation will surprise you. The villages along the northern shore of Issyk-Kul become popular beach resorts in summer, while in winter, tourists are beginning to discover the potential for skiing in the Tien Shan Mountains. Horse riders will relish the chance to get out into the Chong Kemin valley and explore this beautiful part of the country from the saddle. The 9th-century Burana Tower draws curious travelers keen to learn about the lost mediaeval city of Balasagun — this partially-ruined minaret is all that remains of the mosque that once stood on the site. Chinese Muslims built the Dungan Mosque in Karakol, a colorful structure that was built without nails. Nearby stands the wooden Orthodox Cathedral of the Holy Trinity, constructed for use by the Cossacks in the 19th century when the place was a garrison town for the Tsarist Russian Empire.

The Kyrgyz People Have Proud Traditions

One of the great delights about traveling in Kyrgyzstan is the Community Based Tourism Association (KCBTA). This initiative, begun in 2000, aims to improve living conditions of people in rural areas while preserving the natural environment and culture. In practice, this means that if you wish to witness the skill of an eagle hunter up close or learn how to make a felt carpet, you’ll do so with a local organization rather than an outside tour operator. Those activities and demonstrations will be hands on – if you ask to see how boorsok is made, for instance, you’ll be given an apron and tasked with helping to roll out and fry the dough of this delicious bread. The Kyrgyz enthusiasm for their way of life is infectious, and their inclusive approach means that you’ll come away feeling you’ve learned something from a new friend.