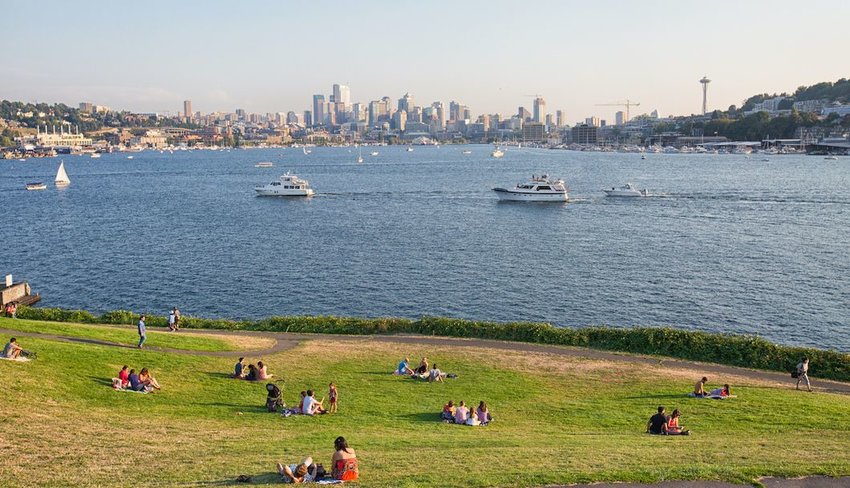 Where to Get the Best Views in These Major U.S. Cities

Enjoying the view seems to be an innate quality that all humans share. Whether it’s ingrained in us from a time when humans relied on views to spot danger on the horizon, or because a nice view is naturally relaxing, you’d be hard-pressed to find somebody who doesn’t love a good vantage point.

But, according to Michael Forster from the University of Vienna, city views are different. He explains that our fascination with cityscapes is derived from a “mix of social engagement, pride or awe that we as humans are able to create such enormous structures.” This explains why, when we visit a new city, getting a view of the skyline is crucial to a successful trip. Read on to discover our picks for the best vantage points in these major U.S. cities and let us know how you enjoy the view.

Most people head straight to the Empire State Building to gain a bird’s eye view of New York’s iconic skyline. But slightly further uptown, Rockefeller Center has one of the best views in the city. The building’s observation deck, Top of the Rock, is located on the 67th floor and has sweeping views of Manhattan, including Central Park to the north and the cityscape to the south. If you prefer a cocktail with the scenery, take the elevator down two floors to the Rainbow Room, which provides an outdoor terrace and fabulous views for paying customers.

With miles and miles of lakeshore access, finding a nice view of Chicago is as easy as walking along the lake path. But, if you want to post up and enjoy the scenery, the Shedd Aquarium is your best bet. Located directly on the water and right off the lakeshore trail, the aquarium allows for 180-degree views of Lake Michigan and the city’s skyline. Best of all, the North Terrace provides outdoor seating and a cafe for lunch on the water.  In one direction you get a glimpse of Chicago’s lakefront architecture and the boats in Monroe Harbor; in the other, a vista of the unending horizon on Lake Michigan.

Not only does Gas Works Park offer one of the best views in Seattle, but it’s the perfect example of the city’s progressive attitude. Turning an old, ugly gasification plant into a beautiful urban park is indicative of Seattle’s forward-thinking mindset. Located along Lake Union in the Wallingford neighborhood, the park’s expansive green space and tall kite hill provide fantastic water views beneath the entirety of the impressive Seattle skyline, and on clear days, vistas of towering Mt. Rainier.

If you’re looking for a quiet place to take in views of L.A.’s downtown and Dodger’s Stadium, spend an afternoon at Elysian Park. A ten-minute hike into the park rewards visitors with an arresting vantage point of the city sprawl and beyond. Located in the heart of L.A., many people visit for a chance to try the park’s famous tree swing. Often called the “hidden” or “secret’ swing, don’t let the name fool you. It’s relatively easy to find and the best way to take in the view.

San Francisco is a truly beautiful city and wherever you go, you’re guaranteed to enjoy the view. But if you’re looking for the most spectacular view of the city’s skyline, the best spot is Mission Dolores Park. Sandwiched between the Mission District and Dolores Heights, the expanse of this city green space is punctuated with shady palm trees and an ambling walkway. Situated ideally on a hill, the park’s angle makes it one of the best places in the city for a picnic with a view.

This view is a bit of a hike — literally. Phoenix's downtown skyline is perhaps less recognizable than other major cities, but as one of the largest metroplexes in the country, you're guaranteed a pretty spectacular view of urban sprawl at the end of this trek. Located 20 minutes from downtown Phoenix, the aptly-named Camelback mountain resembles a camel, and you can follow one of two trails 1,420 feet to its summit or "hump". At the top, gaze out over 360 degree views of the sprawling Phoenix metroplex — a patchwork quilt of emerald green golf courses and sparkling blue pools, punctuated by a handful of structures that make up downtown.

Not only is Cira Green one of the coolest attractions in Philadelphia, but it offers stellar views of the city. Accessing this rooftop area does require admission, but the park’s higher perspective makes it well worth the cost. During the summer months, the rooftop space has a bar, movie screenings, and lounge chairs for taking in the view. And from Cira Green’s higher perspective, the surrounding buildings reflect light beautifully during the sunset.

Fun fact: East Boston used to consist of five different islands, including Noddle’s Island. In 1836, landfills connected the five separate islands into one landmass and created the neighborhood of East Boston that we know today. Although Noddle’s Island technically no longer exists, you can still visit the pier park that bears its name. Located directly across Boston Harbor, Noddle’s provides panoramic views of downtown Boston not seen elsewhere in the city. And since it’s situated right by the airport, it’s easy to visit on your way in or out of town.

Everywhere you turn in Las Vegas, there seems to be an iconic view of the city that never sleeps. But if you really want to see Sin City in style, head to the High Roller, the city's own ferris wheel. Rising 550 feet above the Strip, it's the world's tallest observation wheel. Each of its 28 cabins offers 360-degrees of the city. Book a ticket at night to see the iconic twinkling lights of the Strip. There's also an open bar cabin, so you can sip cocktails during the 30-minute ride. Just note, the line for this cabin tends to be longer.