Top 8 US Cities for Vegan Travelers

Vegan travel has been trending hard in 2018 in the US as more and more people ditch animal-based products in their diets. Some people are ditching dairy for health concerns, others recognize the importance of a meat-free diet for the environment, and it’s now harder than ever to ignore the atrocities of factory farming and animal agriculture. On top of health, animal welfare, and environmental consciousness, many people are looking for a change and it’s impossible to undermine the all-encompassing benefits of vegan food. In the US, veganism has grown by 600% in the last three years - a trend that is being seen worldwide.

It’s now easier than ever before to be vegan. Vegan products are being made at an astonishing rate, such as the hugely successful Beyond and Impossible Burgers, vegan milks, ice creams, and award-winning cheeses. These products are popping up in almost all grocery stores, not just the organic market. Farmers’ markets are commonplace, vegan restaurants and cafes are opening up everywhere, athletes and celebrities are adopting and promoting the plant-based lifestyle, more and more doctors are now backing the health benefits of the diet, and the positive impact on the environment is undeniable.

It's safe to say that veganism is not a fad, and the US is one of the best places in the world for vegan travel. Vegan food is healthy, diverse, and mouth-wateringly delicious, so you do not - I repeat, do not - have to be vegan to enjoy it. Add any of these eight cities to your next US itinerary to get the best vegan food in America. 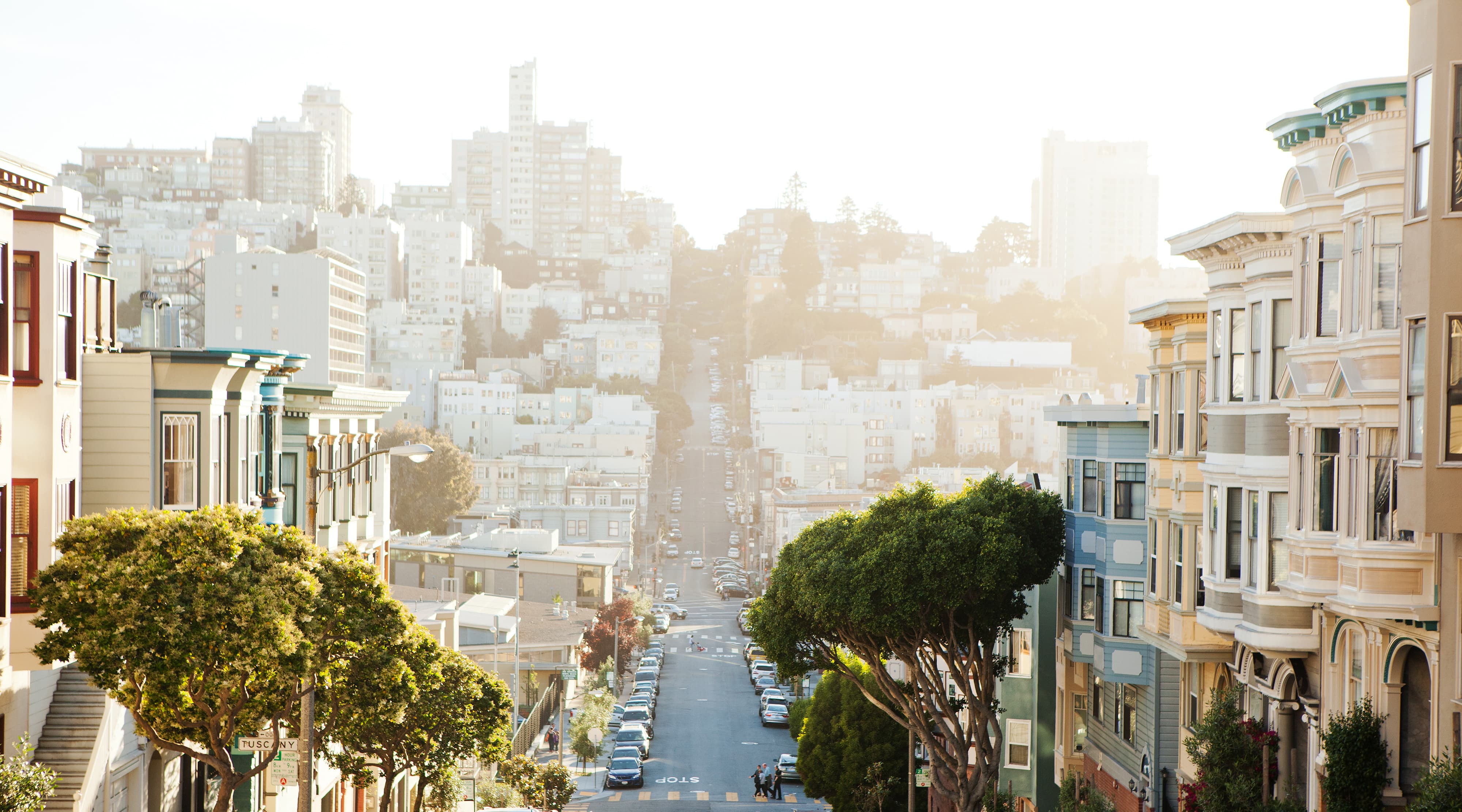 One city that has always been at the forefront of the vegan movement, San Francisco is a vegan foodie’s heaven. The city’s vibrant neighborhoods all support vegan eateries, as well as their own farmers’ markets on the weekends where you can get all the fresh, local, organic produce you need. The city’s Mexican influence has sprouted lots of wonderful vegan takes on Mexican meat-heavy classics. Stop in at The Butcher's Son to sample their house-made vegan meats and cheeses. Be careful, though, after sampling their Killer BLAT sandwich, you may never want to leave.

Portland is an inspiring city for vegans, and it commonly ranks as one of the best worldwide destinations for vegan travel. From dive bars to food trucks, bakeries and high-end eateries, many of Portland’s restaurants have caught on to the trend and offer plant-based dishes, catering to the growing demographic. If you’ve got a sweet tooth, don’t miss out on chowing down on one of Voodoo Doughnut's scrumptious, sugary vegan creations.

New York is an absolute breeze for vegans. This city caters to any and every trend and demographic, and has been the birthplace of many food and lifestyle movements. The ethnically-diverse city is a pleasure for people who want to dig into new and exciting cuisines, and you can find an astonishing number of worldwide vegan tastes in New York. The city’s Chinatown is known for its fascinating food history, which draws tourists onto its busy sidewalks and into its small shops. For a taste of authentic Chinese food in the heart of Chinatown, head to Buddha Bodai kosher vegan restaurant for drool-worthy classics.

If you’re into eating with a conscious, Seattle is one of the best places to do it. One of the biggest challenges with vegan travel in the states is the difficulty of finding American food classics and diner-style meals. In Seattle, tuck into the family-owned Wayward Vegan Cafe and indulge in vegan takes on American favorites such as pancakes, giant steak breakfasts, fried chicken platters, and a lot more. Head over to the Seattle Vegan website to learn about everything vegan happening in Seattle.

Chicago has a long-established vegetarian scene and a rapidly-growing vegan scene. The famous Chicago Diner has been meat-free since 1983. The restaurant isn’t purely vegan, but it offers an abundance of delicious vegan meals. If you have the pleasure of eating there, make sure you order one of the restaurant’s award-winning vegan milkshakes. This is just the tip of the iceberg when it comes to amazing vegan food in the non-stop metropolis of Chicago. If you’re visiting in October, check out Chicago VeganMania, which is labeled as “America’s most awesome vegan celebration.”

Austin is known for its music, nightlife, natural beauty, almost never-ending sunshine, and its meat-centric tex-mex and famous Texan BBQ. However, it’s also one of the best up-and-coming US cities for vegan food, and you’ll be able to enjoy cruelty-free takes on all your favorite Texan dishes. Austin's coma-inducing comfort food is now available to all vegans at places like Counter Culture, where you can get yourself a big plate of Southern baked seitan or lovely lentil loaf.

Most Californian cities are absolutely killin’ it with vegan food options and availability. With San Diego’s proximity to Mexico, the city boasts a delicious array of Mexican-influenced vegan restaurants, food trucks, and cafes. The city’s weather and hip vibe make the food that much better. Traveling can often be exhausting - mentally, physically, and emotionally - and sometimes all we want to do is fill our stomachs and chow down on some fast food. Plant Power Fast Food has made this easy, and you don’t have to worry about being unhealthy. Wrap your hands around any of the menu’s amazing meatless burger options, and you won’t be disappointed.

South Florida may not always be the easiest place to seek out vegan eats and stay on track with your diet, but Miami has become part of the plant-eating revolution. The options are endless. If your wallet isn’t hurting too much from all the eating and traveling you’ve been doing, consider getting a table at Plant Miami. The restaurant focuses on applying innovate tools and techniques to create high-quality, inspiring vegan dishes from organic ingredients. Do yourself a favor and try the coconut ceviche tacos.

The Best Hike in Every State

The Most Beautiful Forests in the World