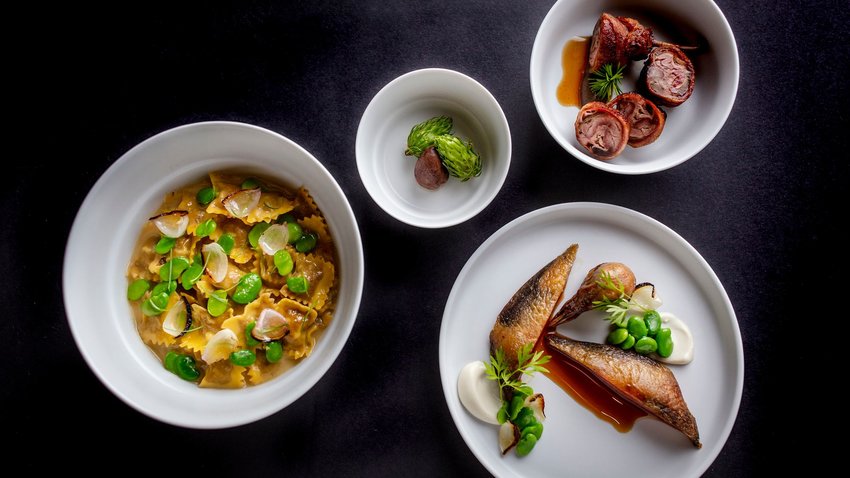 This State Has the Most Michelin-Star Restaurants in the U.S.

Many food lovers looking for the hottest eats around the world turn to the Michelin Guide, the world's premier ranking of restaurants. And while you might expect a culinary powerhouse like New York to hold the title for the most Michelin-starred restaurants in the country, you'd be wrong.

If you’re planning a trip through California, here’s a look at the current Michelin three-star restaurants in the state.

The Restaurant at Meadowood, Napa

The Restaurant at Meadowood in Napa has Executive Chef Christopher Kostow at the helm It’s long been recognized as one of the premier dining spots in Napa, blending rustic and luxury elements into one elegant experience. Chef Kostow and his team showcase California’s seasonal ingredients in a delicious, yet approachable presentation. He’s developed relationships with growers, foragers, artisans and others who all work together to create a positive impact on Napa Valley. Meadowood has its own 2.5-acre culinary farm with seasonal crops which are grown using organic and sustainable methods. And, as you might guess, the accompanying wine menu is excellent.

Chef Corey Lee hails from South Korea and runs Benu in San Francisco, which has been a three-star recipient for the last four years. Chef Lee is renowned for experimenting with East Asian flavors combined with French techniques he learned while working as chef de cuisine at fellow three-star restaurant, The French Laundry. Benu’s location is also noteworthy — it’s set in a historic 1922 building that was once the headquarters for the San Francisco Newspaper Company.

Chef Dominque Crenn opened Atelier Crenn in San Francisco back in 2011. She’s held the honor of two Michelin stars for several years and was finally awarded her third star in 2019. That third star gave Chef Crenn another important accolade — she is the only woman in the United States to head a Michelin three-star restaurant. If that wasn't enough, she also earned a star for her newest restaurant, Bar Crenn, in its first year being eligible for a Michelin star.

Set in another prominent wine region — Healdsburg in Sonoma County — SingleThread is a rising star on the Michelin scene. Only three years old, the restaurant is the product of husband-and-wife team Kyle and Katrina Connaughton, who have earned a loyal following in addition to their Michelin stars. They also ranked #71 on San Pellegrino’s World’s 50 Best Restaurants for 2019. Chef Kyle has spent considerable time globetrotting and working in prestigious kitchens around the world. Aaron Koseba is SingleThread’s Chef de Cuisine and has also worked all over, including D.O.M. in Brazil.

For as long as I can remember, Thomas Keller’s The French Laundry has been one of the most sought-after — and toughest — reservations to get. His flagship three-Michelin-starred restaurant led to other dining options including Bouchon, Ad Hoc and Per Se. Keller was one of the early pioneers of the lavish tasting menu concept, which has become a norm in the fine-dining scene. If you aren’t able to snag a reservation for your preferred dates, you can try to get a table at nearby Ad Hoc or Bouchon.

Chef Michael Tusk opened Quince in San Francisco back in 2003, and it earned a third Michelin star in 2017. Serving a blend of Northern Italian and fresh California cuisine, Chef Tusk is committed to sourcing the best local products. He partnered with one of the pioneers of organic farming, Fresh Run Farm, who are the exclusive provider for Quince’s heirloom tomatoes, various vegetables and even flowers. Chef Tusk was the recipient of a prestigious James Beard Award for Best Chef: Pacific in 2011 for both Quince and his Italian restaurant, Cotogna. If you can’t snag a reservation for Quince, try his new casual wine bar, Verjus, that opened earlier this year.

Manresa is located in Los Gatos and is the brainchild of chef David Kinch, who was a pioneer in farm-to-table before it became a cliché. The menu places a heavy emphasis on vegetables, and his dishes pay homage to the Northern California region, including one that mimics the rocky coasts along the Bay Area. Some of his chefs have gone on to open their own places, several of which have earned Michelin stars of their own, like James Syhabout who operates the two-star Commis in Oakland.