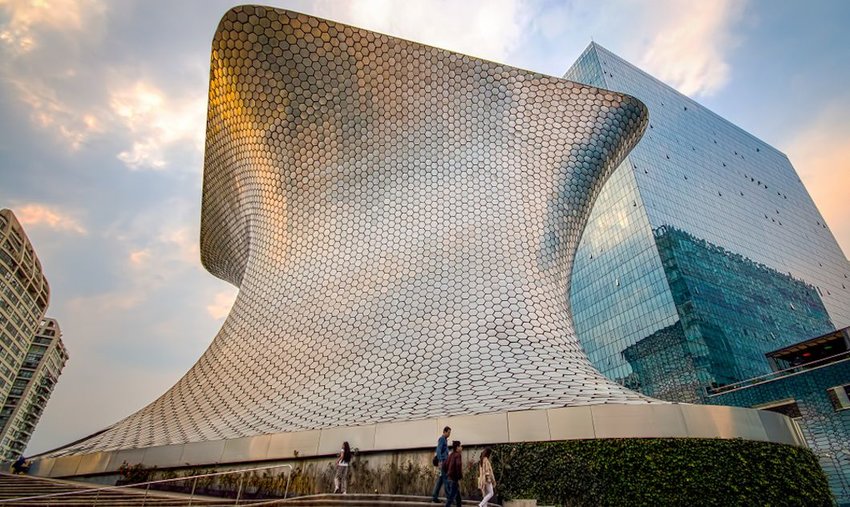 These 7 Museums Are Modern Architectural Marvels

Museums like the Guggenheim and the Louvre are ingrained in our culture and are best known for their impressive collections and beautiful architecture. These institutions often make it onto top museum lists, and for good reason. We know you love them, but we want to introduce you to some lesser-known, but equally noteworthy museums that are architectural marvels in their own right. From science and technology to art and history, these modern galleries from around the world are works of art that you can admire without even setting foot inside.

Visit the largest museum in Canada during your next trip to Toronto. The Royal Ontario Museum features exhibits of art, world culture, and natural history and attracts more than one million visitors every year. The historical buildings of the existing structure are complemented by a bold new façade of prismatic glass and metal. According to Studio Libeskind, the architectural firm in charge of the project, the crystal-like atriums presented unique design challenges making it “among the most complicated construction projects in North America.” Besides the impressive multi-million dollar expansion, other reasons to visit include the museum’s vast collection of archaeological specimens as well as its array of design and art pieces.

Since 2014, the Louis Vuitton Foundation’s art museum in Paris has introduced visitors to exhibitions promoting “modern and contemporary artistic creation.” The museum is a production of world-renowned architect Frank Gehry. Its contemporary design presented builders with unprecedented technical challenges, namely its clustered white blocks (that the team called icebergs) and twelve glass “sails” supported by wooden beams. The interior design is just as impressive as the exterior — opening up to vast, lofty halls with plenty of natural light.

The glass walls and ceilings not only provide epic views of downtown Paris from top floors but also play with the museum's artwork through light, mirrors, color, and more.

Located on the coast of Lake Michigan in downtown Milwaukee, Wisconsin is one of the largest art museums in the United States. The Milwaukee Art Museum is home to nearly 25,000 works of art including an extensive Georgia O’Keeffe collection. The museum is comprised of three buildings including the War Memorial Center, Cudahy Gardens, and the Quadracci Pavilion — the iconic glass building that opened in 2001. The 90-foot glass ceiling features a 217-foot moveable, wing-like screen that unfolds twice daily. Called the Burke Brise Soleil, these “wings” open at 10 in the morning, flap at noon, and close when the museum closes. The pedestrian suspension bridge conveniently connects the museum to the city.

Located in the dense forest of Koka near Kyoto, Japan, the MIHO Museum offers visitors a unique architectural experience that blends manmade structures and natural surroundings. Designed by famous architect I. M. Pei, the steel and glass structures of the museum were designed to contrast against the panoramic views of the mountains and valleys below. Visitors first walk through an arched tunnel to reach the museum entrance, which is one of the only above-ground structures in the complex. In an effort to preserve the natural environment, about 80% of the museum is underground. The exhibits at MIHO frequently change with a focus on ancient works from the Egyptians, Romans, and Asian cultures.

The Museo Soumaya has become a highlight of Mexico City’s art scene with its shimmering, anvil-shaped exterior and impressive art collection ranging from Mesoamerican history to modern day. While the museum technically consists of two buildings, the most popular is the new structure at Plaza Carso, where the primary museum collection was moved in 2011. This nine-story building made of 16,000 aluminum hexagons was designed by Fernando Romero, who commonly focuses on fluidity in his designs. As one of the most-visited museums in Mexico, it’s no surprise that its list of A-list displays is lengthy. one must-see is the vast collection of artwork by Rodin including the famed sculpture "The Thinker" — a permanent exhibit here.

The MAXXI National Museum of 21st Century Arts focuses on contemporary art and architecture. Upon opening in 2010, this museum designed by architect Zaha Hadid received a Stirling Prize for architecture by the Royal Institute of British Architects. The massive complex consists of two sections — "MAXXI Art" and "MAXXI Architecture" — along with an outdoor courtyard for large-scale works of art. The interior stairways and walking paths overlap to create an exciting and dynamic environment for visitors. The museum's most prominent architectural features are its curved, concrete walls and suspended, black staircases. Its interior colors and structures are a nod to the overarching theme of the museum — to promote contemporary art and architecture.

Museum of the Future

Known as one of the most challenging construction projects in the world to date, the Museum of the Future is set to open by fall 2020, according to BBC News. Just in time for the World Expo in October of 2020, Dubai will welcome its newest and perhaps, most impressive museum. The framework for this uniquely-shaped structure was completed in 2018, while the interior exhibit space is currently being finished. Just what is the shape supposed to symbolize? Some involved in the project compare it to the shape of an eye with a void in the middle. The void is to represent the unknown or the future. The museum will include exhibits, an immersive theater, and themed attractions. The museum's overall mission is to inspire visitors to conceive “a better future for ourselves and our planet.”