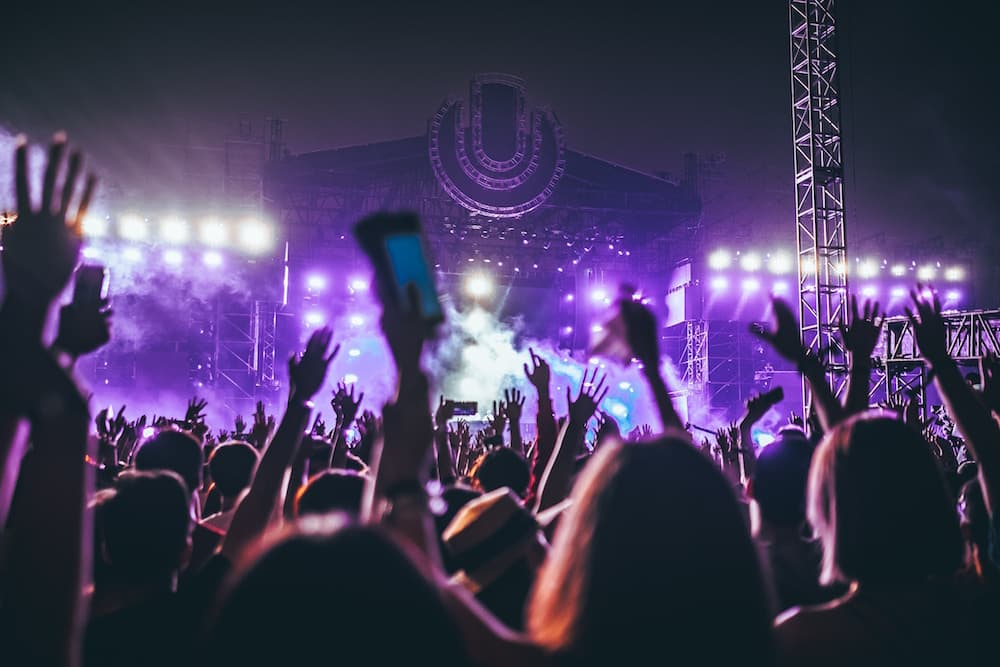 With festival culture growing at an astounding rate, there’s no doubt you’ve been to at least one by now or know someone who has. When you’re choosing which festival to buy a wristband for, it's important to keep in mind that despite what you may have heard, festivals aren’t all facepaint and flower crowns. Festivals aren’t one-size-fits-all - from foodies, to bassheads, to families, there’s a festival coming up for everyone.

To help you figure out your spring plans, we’ve broken down the lineups and overall ~vibe~ of some of our favorite festivals, so you find your perfect match. Once you’ve found the one, check out our festival must-haves for a list of the things you need to pack.

We'll kick things off with the festival of all festivals - Coachella.
When & Where: April 13-22, Indio CA, Coachella Valley
Headliners: Beyonce, The Weeknd, Eminem, Portugal the Man, and probably anyone else you’re obsessed with
Typical Crowd: Coachella draws all kinds of people, from the A-list to the festival fiends. Known for its chart-topping lineup, Coachella has something for everybody, and they’re all there to have a good time...and maybe get some Instagram likes.
Vibe: Diehards may complain about the “corporate atmosphere” from the publicity and sheer number of people attending, but things tend to be super organized as a result, and you get positive controlled chaos.

Aka, “Country Music’s Coachella”.
When & Where: April 27-29, Indio CA (same place, the weekend after Coachella)
Headliners: Florida Georgia Line, Garth Brooks, Keith Urban
Typical Crowd: This festival is probably not on the radar for the typical festival-goer. You’ll see cutoff jean shorts, bandanas, and cowboy hats. People will be wearing anything American-themed and you’ll see some parents with their kids and folding chairs in tow.
Vibe: Kick back in a folding chair and enjoy the show. There's not too much debauchery. Just some dancing on the tailgate and cold beers flowing. Basically the atmosphere of every country song.

Shaky Knees dishes out an amazing lineup of rock bands.
When & Where: May 4-6, Atlanta, GA
Headliners: Jack White, Kings of the Stone Age, The National
Typical Crowd: All ages, expect to see some kids and the older crowd turning out.
Vibe: One word: chill. People come for the music as well as the party.

Attracting a completely different crowd than its sister festival Shaky Knees, this festival offers a lineup packed with dance-your-face-off EDM bands.
When & Where: May 11-13, Atlanta, GA
Headliners: Kygo, Marshmello, Zedd
Typical Crowd: Ravey. Probably don’t bring your kids. Expect a lot of people in their twenties, either physically or at heart.
Vibe: This festival feels like one giant nightclub. Expect self expression via colorful costumes and dance.

This beachfront festival features a diverse lineup for a wild, beach party atmosphere.
When & Where: May 18-20, Gulf Shores, AL
Headliners: Kendrick Lamar, Chainsmokers, The Killers
Typical Crowd: A younger crowd mostly geared towards college-aged attendees.
Vibe: Hangout has more of a frat party/spring break atmosphere but due to its diverse lineup offers a good time for a variety of music lovers. Also, night owls will have a blast at their after-hours raves on the beach.

With the main stage overlooking a huge gorge, this fest is all about location, location, location.
When & Where: May 25- 27, George, WA
Headliners: Mac Miller, Chance the Rapper, Frank Ocean, MGMT
Typical Crowd: This festival is community-oriented. Sharing is caring, so you'll see all kinds come out to join the party.
Vibe: As with most camping festivals, the late night party scene is either a huge draw or a major dealbreaker depending on what you’re looking for. The hill overlooking the gorge means even if you aren’t looking to be front row, you can lay out a blanket and have an equally amazing view.

EDC is a trippy carnival known for insane bass drops and a sunset-to-sunrise schedule.
When & Where: May 18-20, Las Vegas (also travels to Mexico, Orlando, Japan, and China)
Headliners: Kygo, Afrojack, Diplo, Porter Robinson, Martin Garrix
Typical Crowd: Young, wild, and free. No kids here. Come to enjoy bass drops at an adult, R-rated Disney World.
Vibe: High-energy, hardcore rave atmosphere means dancers won't stop until the sun comes up. This is definitely not for the faint of heart.

The NYC-based festival attracts celebs, families, and diversity.
When & Where: June 1-3, NYC
Headliners: Eminem, Travis Scott, Halsey, Khalid
Typical Crowd: You’ll see some families during the day, young partiers there for the EDM, and tons of New Yorkers enjoying a festival on their own turf.
Vibe: This fetival is definitely not for the “hippies.” It's more of a fast-paced city atmosphere. Well, it is New York, after all.

More “hardcore” than other US festivals, the four-night camping festival boasts a star-studded lineup and tons of energy.
When & Where: June 7-10, Manchester TN
Headliners: Eminem, The Killers, Future, Bassnectar
Typical Crowd: Lots of young people but that definitely doesn't stop a diverse crowd from showing up. It’s not a place for kids, but if you don’t mind witnessing some shenanigans, just about anyone can have a great time.
Vibe: People say you can’t beat the “positive energy” and community found at what is affectionately called “the farm.” People will be partying hard.

A mini city that is put up and torn down on its route around North America.
When & Where: June 21- August 5, Across North America
Headliners: 3OH!3, All Time Low, differs on location
Typical Crowd: Because of its many stops, each location is going to give you a different crowd. Check the lineup for your location to get a better idea about what kind of people will be attracted.
Vibe: Expect crowd surfing and mosh pits despite the tour’s efforts to discourage such behavior.

Throw any preconceived notions about folk music out the window and prepare to see how the genre has evolved over time.
When & Where: July 27-29, Newport RI
Headliners: Courtney Barnett, Sturgill Simpson, more to be released
Typical Crowd: Relaxed and here for the music, people of all ages can come together and enjoy the atmosphere.
Vibe: You’ll see way more blanket-lounging than dancing and headbanging. Kick your feet up and enjoy good food, great friends, and awesome music.

With a reputation for being one of the most organized festivals, Lolla has it down to a science. They keep people coming back with great headliners year after year.
When & Where: August 2-5, Chicago
Headliners: The Weeknd, Bruno Mars, Odesza, Arctic Monkeys
Typical Crowd: Yes there will be a lot of young energy, but because of its size you can find people of every age and walk of life. Get excited to see your favorite performers and let the good times roll.
Vibe: The main complaint about Lolla is the abundance of young people there to party, which, let's face it, is pretty standard for just about any festival. There will be huge crowds to see the many amazing artists, but if you show up knowing what you’re getting yourself into, there’s no reason you can’t have an amazing time.

Providing music for every preference, Music Midtown is another festival with a crowd-pleasing lineup. Its smaller size sets it apart and allows for a more intimate atmosphere without sacrificing big name artists.
When & Where: September TBA, Atlanta
Headliners: TBA, but expect it to be similar to Lollapalooza
Typical Crowd: There will be less “ravers” and “hippies” as it's more geared to the Atlanta population. Expect a lot of college-aged attendees who are slightly more tame.
Vibe: City energy, primarily focused on those who want to drink and have a good time and eat great food.