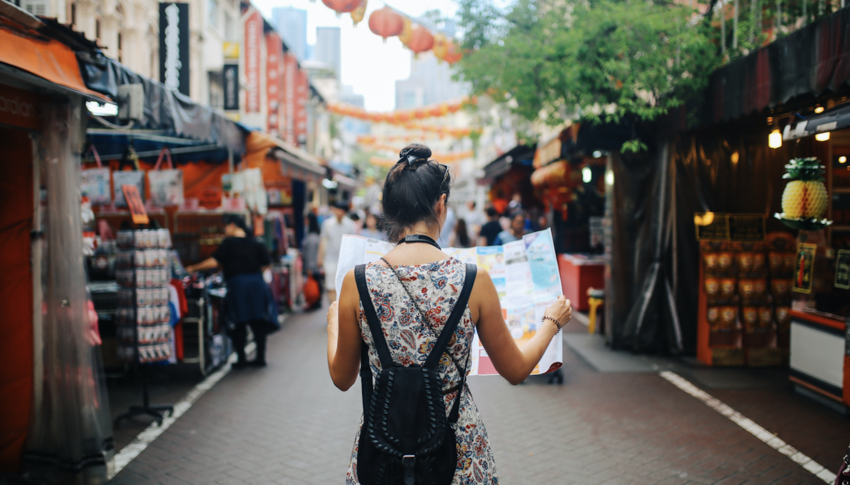 The Psychology Behind Stumble-Upon Discoveries

Bolting down the forested highway in Palisades, New York, I resisted the temptation to nudge the gas pedal ever further. I was in my usual self-imposed rush — not because I was running late, but because I was trying to cram in as many sites as I could in a limited amount of time. And even though I was only on a one-night road trip to Tarrytown, I had at least a dozen places starred on Google Maps that I “had” to check out before the sun set ... and the clock was already approaching 3 p.m.

I was growing skeptical of Waze’s fastest route taking me down this path, seemingly in the middle of nowhere, when a simple white building with a sign “The Market” caught my eye.

That’s cute, I thought. Attached to the other side was a burger stand. Intrigued, I fast-forwarded to the next day’s agenda. Would there be enough time to stop here tomorrow? Not really. I found myself doing a U-turn and pulling into the parking lot.

The 9W Market and adjoining The Filling Station Burger Station were a slice of calm in my crazed day. The friendly cashier analyzed my likes and dislikes and helped me pick out a crab roll sandwich. “For here or to go?” she asked.

I was in a rush. Surely I needed to scarf down this meal with one hand on the steering wheel. But I found myself saying, “For here.”

Fast forward an hour, and I was still enjoying the open-air cafe, savoring every bite of my sandwich and homemade chips. And on my return trip the next day, I stopped for a burger and told the two young men at the grill that it was the “best burger I’d ever had.”

Driving away, I wondered what made the experiences so joyful. Was the food really that delicious? Was the set-up really that charming? Or was it the fact that I simply didn’t have this on my overzealous itinerary, and the delight of stumbling upon the place made it all the more rewarding?

The Search for Travel Novelty

I talked to travel psychologist Dr. Michael Brein to find out. “Since you are seeking new experiences and novelty, it's all the more exciting when something is totally fun and unexpected,” he said.

I thought back to my trips in the last year and to those moments that I immediately texted friends about. They weren’t those carefully researched spots like the Rome’s Colosseum or South Africa’s Robben Island (both, of course, are major landmarks worth the visit) — but the standouts were places people might miss if they didn’t find them accidentally, as I had.

There was the Taiwanese restaurant Pine & Crane in Los Angeles’ Silver Lake neighborhood with a line to the door, and which served one of the best dan dan noodle dishes I’d ever had; the Istanbul coffee shop in an antique store, Maison Balat, with oddities from hairbrushes to rotary phones lined ceiling-high; the homemade ice cream spot I Am Here Cafe on the Turkish Island of Kekova with the owner who kept popping up in different places, shouting “I am here!”; the casual eatery Properly Fueled in Bordentown, New Jersey with the lemongrass green tea doused with activated charcoal; the gelato pop shop Palettamérica across from a gas station in San Juan, Puerto Rico, with popsicles so refreshing that the attendant watched my car so I could go get one; and the Cal-Mex restaurant Jardines de San Juan in San Juan Bautista, California, set in a garden mixing cacti and flowering vines.

And it wasn’t just eats. There was the live bugle player from the tower of St. Mary’s Church in Krakow, Poland, who plays every hour on the hour around the clock; the artistic sound effects walking across the Soleri Bridge in Scottsdale, Arizona; the 10-story high slide in the 60,000-square-foot former shoe factory at St. Louis’ City Museum; and the underwater shipwreck while snorkeling off of Bermuda’s Grotto Bay.

While these were experiences I could have planned ahead of time, the fact that I didn’t expect them gave me that feeling of surprise-and-delight.

“As tourists morph into just real travelers, they want to bring some of the experience back with them,” Brein explained. “Often it's the serendipitous things, the unexpected [that] stick with you.” And, he adds, “The most memorable experiences are with people.”

Human Connections Provide the Most Delight

Feeling a bond with other people in any way definitely leaves a lasting effect. When I walked out of the movie theater at The Chase Park Plaza Royal Sonesta in St. Louis, I was still trying to unravel my thoughts on Last Christmas, when I was met with two theater workers standing there, grinning with a platter of mints and chocolates for me to choose from.

I grabbed a mint and pranced back to my hotel savoring that sweet touch. I later learned the Chase Park Plaza Cinemas started the tradition when they opened in 1999 and have kept it up since then.

“It's just a little extra touch of class,” Gerry Marian, the theater’s in-house organist (another delight), told me later. “It really gives us a warm, good send-off feeling.”

On another occasion, I was traveling with my friend Cindy Chen in Porto, Portugal, when we both noticed a small, rustic corner diner. While we couldn’t articulate why, we were both instinctively drawn to it — and since we had met on a previous trip to Morocco, we were pre-conditioned to the same kind of travel experiences. “Looking into the window, it looked like everyone was very relaxed and enjoying their food — it seemed like a place everyday people would go,” Cindy told me.

We squeezed into Cervejaria Gazela, which was bustling with locals, and ordered what everyone else was having — the Cachorrinho “hot dog” made of two kinds of fresh sausage topped with melted cheese and served on crispy toasted bread. One bite in, I was obsessed.

While that was enough to clinch the deal, a Portuguese businessman chatted us up for hours, giving us expert advice (complete with photos) on our imminent visit to the Azores. He told us that he came to the restaurant every time he was in town because of the local vibe and the people.

“Although we are not on the busiest street and we even are on a slightly hidden street, we are a pleasant surprise for those who meet us and those who seek us,” a representative of Cervejaria Gazela shared when I reached out. Since our visit in 2016, their clientele has grown to 40 percent tourists, likely due in part to a visit by Anthony Bourdain for Parts Unknown in 2017, and their signature dish being nominated for the 2019 World Restaurant Awards.

“I enjoyed it because it was an accidental find and a chance to meet the locals,” Cindy recalls. “There was no air of animosity, which sometimes happens when tourists walk into a more local establishment. Plus, it was good food for a good price.”

Dr. Brein himself bonded with locals at a campground in Sicily, where the owner saw that he was determined to learn Italian and pulled him aside for 20 minutes every morning to teach him.

“When you have an unexpected wonderful experience with locals, that sticks with you even more,” he explains.

The Unexpected Isn’t For Everyone

So if the unexpected finds and connections are what drive us, does that then mean we should completely ditch travel planning, just arrive in a place and go? After all, as hard as I worked to snag a ticket to see Leonardo Da Vinci’s The Last Supper in Milan, it’s not like I was calling up friends and telling them to book their own tickets, stat.

“That is something that has built-in expectations,” Brein explains. “You go there because you've got to experience these things that everybody says are the most important aspects of that culture. You have the bragging rights, but it's not nearly as exciting as something totally unexpected that comes your way.”

Brein has accordingly seen a rising trend in customized, bespoke itineraries: after travelers complete detailed surveys, they’re given activities built around their personalities — or even surprise trips, where travelers don’t know where they’re going at all until they depart.

“The psychological value of having a really worthwhile new experience carries spontaneity,” he says. But he also muses, “Can you imagine, someone says, ‘Here’s your blindfold, step up on this ramp’ and you’re either on a weightless flight journey or expected to bungee jump? Some surprises aren't necessarily the most pleasant.” So planning the element of surprise comes with a risk factor of being off the mark.

“It just depends on the personality of the traveler,” he says. “The more experienced you are, probably the more open to unpredictable situations you are and the more you look forward to it.”

As for my own most-cherished adventures, what they all have in common is that they  happened organically — and pushed me to be my bravest, most spontaneous self. “When you’re traveling, you're more open, you want to receive more, you want to be all that you can be,” Brein says. “You want to personally grow and develop self-confidence and esteem. All kinds of new stimuli are coming in and you get rewarded quickly for your efforts”  Whether at that burger stand, artsy bridge or rustic spiral slide, somehow everything aligned to put me in those exact times and places at the exact moments I was in the mood for that kind of a discovery. That’s what, for me, sparks true, magical travel joy.