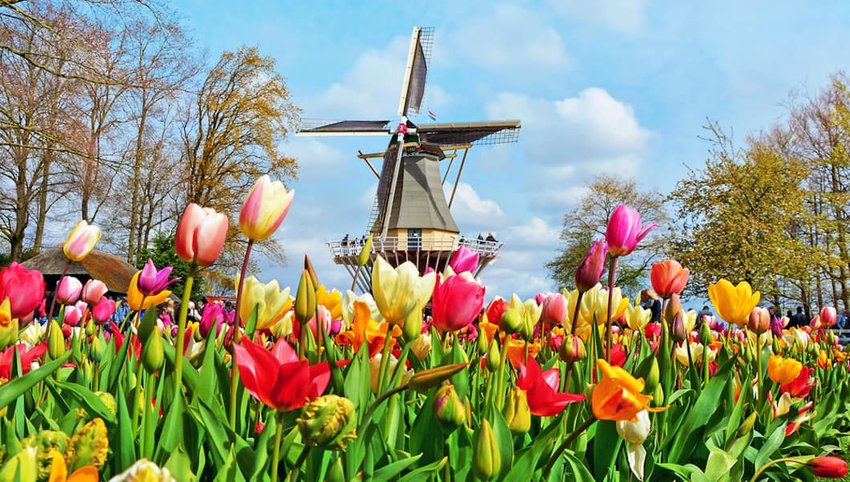 The Most Stunning Tulip Time Festivals in the World

There’s something special about tulips. Whatever your preference, there’s a color and style that can’t fail to impress, from the delicate and subtle pinks of Foxtrot or China Town to the blousy and bold Brazil or Black Parrot. As warmer climates usher in a spring season of blossoming flowers, we can't help but be drawn to these colorful blooms. If you’re a fan, then make your way to one of these tulip time festivals around the world.

If you thought tulips originated from the Netherlands, you’d be wrong. They actually come from much further east. The blooms are native to Asia and the Ottomans introduced them to the Dutch. The annual International Istanbul Tulip Festival has been held each April since 2006. Millions of tulips brighten up every corner of this captivating city. Head to Emirgan Park close to the Bosphorus, one of the city’s largest public parks, where a program of events incorporates music, dance and art alongside the tulips themselves. Also unmissable is the centrally-located Sultanahmet Square, where half a million bulbs erupt as a spectacular flower carpet in front of the Blue Mosque – the world’s largest.

The largest festival of its kind in the world, the Canadian Tulip Festival has been staged since 1953. It celebrates the gift of tulips from the Dutch Royal Family to the Canadians at the end of World War Two to express their gratitude for offering the family a safe haven. It also marks the occasion of Princess Margriet's birth in Ottawa in 1943, after her parents fled into exile as the Nazis marched into the Netherlands. The festival takes place in May and over a million tulips provide a riot of color throughout the city. One of the best places to see these displays is in Commissioners Park, by the shores of the Dow’s Lake section of the Rideau Canal, a UNESCO World Heritage Site.

Kent is known as the Garden of England and what better sight to see at this time of year than broad swathes of tulips? Hever Castle is one of the county’s most beautiful castles, the childhood home of Anne Boleyn, wife of King Henry VIII. At the end of April, the efforts of bulb master and Chelsea Flower Show gold medal winner Johnny Walkers, together with a capable team of gardeners, are on show. Self-guided trails as well as immersive tours with the castle’s Head Gardener are offered as 21,000 of these stunning flowers come into bloom. Don’t miss the displays at the Italian Garden which extend the length of the gardens right down to the lake. Florist Pamela Brise ensures the floral adornment continues inside the castle as well.

Each year, the spring displays at Washington Park herald the city’s hotly-anticipated tulip festival. The flower was declared the city’s official flower on July 1, 1948 and the mayor at the time asked Queen Wilhelmina of the Netherlands to name a variety to represent Albany. She duly obliged and “Orange Wonder” was the response. The first festival was held the following year and has been a much loved event on the city’s social calendar ever since. Highlights include the crowning of a Tulip Queen, a gala ball to raise money for good causes and the Mother of the Year award. This year’s festival is set for mid-May to coincide with Mother’s Day. As ever, the Dutch tradition of street scrubbing kicks off the proceedings; this year, catch it on the 10th of the month.

You can't get away with an article about tulips without mentioning the Netherlands. The breathtaking beauty and scale of Holland’s Keukenhof Gardens are unrivaled anywhere in the world. All kinds of flowering bulbs are represented, but it’s the tulips that steal the limelight thanks to their enormous collection of shapes and colors. The early bloomers are already in flower, with over a hundred varieties in the Willem-Alexander pavilion and more in the Oranje Nassau pavilion. Though the gardens have existed since the 15th century, the present incarnation began in 1949 when a group of flower bulb growers set out to exhibit their spring-flowering bulbs to the public. Now, five hundred growers participate. This year marks the 70th anniversary of the event and by the time it ends a million visitors will have passed judgement on the festival’s glorious displays.