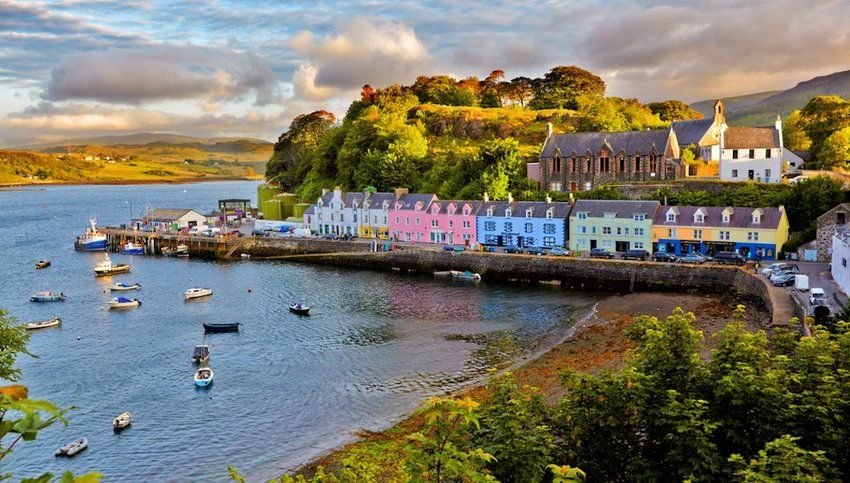 The Most Stunning Coastal Towns in Europe

Europe’s long and varied coastline is dotted with settlements whose inhabitants have, for centuries, made their living from the sea. Today, many feature historic mansions, charming historic squares and quaint harbors that draw as many tourists as fishermen. Though some have grown into cities, others are constrained by the physical landscape to remain impossibly beautiful coastal towns.

The gem of Istria covers a tiny headland, huddled around a harbor full of fishing boats. For centuries, the steeple of St Euphemia has risen like a beacon from the mass of terracotta roofs which surround it. On the ground, explore cobbled streets and narrow alleyways to discover a liberal scattering of gift shops, cafés and bijou apartments.

The largest town on Scotland’s Isle of Skye welcomes visitors with the sight of rows of brightly-painted cottages. Life centers around the busy harbor, but those with time on their hands are advised to take a hike. The Scorrybreac trail and the path up the headland known locally as The Lump are two of the best local walks.

Few Greek towns have made such an impact as Santorini's Oia, and you only have to set eyes on the place to understand why. The town’s whitewashed homes and businesses cling to the rocky flanks of the dormant volcano overlooking the azure lake that fills its caldera. Its intense beauty has drawn artists and photographers for years, and it doesn’t disappoint.

Though visitors would not be disappointed with any of the Cinque Terre settlements, there’s something about Vernazza that’s especially compelling. The cupola-topped bell tower of Santa Margherita di Antiochia Church stands tight against the waterfront but for the best views, climb the steps to the tower of the ruined Castello Doria and look out over the glittering sea.

There are many contenders for stunning coastal towns along Portugal’s beautiful Algarve, but Tavira is a stand out. The town itself is located inland of a long sandy beach and the salt pans are home to a wide variety of seabirds including waders, spoonbills and flamingos. In the heart of the medieval town, you’ll find a castle built in the 13th century on the site of a mosque and Santa María do Castelo Church, which houses the tombs of seven knights allegedly ambushed by the Moors.

Located on the Baltic coast, the Hanseatic port of Visby lies on the island of Gotland. Its 13th-century ramparts, historic warehouses and the former homes of wealthy merchants make this one of the most delightful towns in Sweden. Pull up a chair at one of the pavement cafés that grace Stora Torget, the main square, and people watch over a cup of coffee. But when you can drag yourself away, the Gotland Museum provides a fascinating glimpse into the town’s Viking past.

In their rush to tick off the sights of Seville, Cordoba and Granada, visitors sometimes overlook Cadiz, but to do so would be a shame. In the 17th and 18th centuries, merchants built watchtowers to ensure they knew their ships had returned to port. Today, 126 of the 160 remain. Get a bird’s-eye view from the Camera Obscura at the top of Torre Tavira before taking a stroll at ground level to gaze up at these interesting structures.

Nicknamed “the fairytale town of Denmark,” Aeroskobing, or Ærøskøbing as it’s written in Danish, is a stunner of a coastal town. Cobbled streets, winding alleyways and historic houses give the place bags of character. Don’t miss the Priors House, which dates from 1690, the town’s cook house – built to reduce the risk of fire breaking out on the wooden boats that docked in port – and Ærøskøbing Church in the market square, the third to grace this spot.

Pronounced “Foy,” well-heeled Fowey made its money on the export of china clay, which these days manifests itself in the pastel-colored houses and cosy pubs that jostle for position around this characterful Cornish harbor. The town that inspired Daphne du Maurier to write Rebecca makes a handy base for sampling the famous local mussels and for exploring the rest of the Polperro heritage coastline.