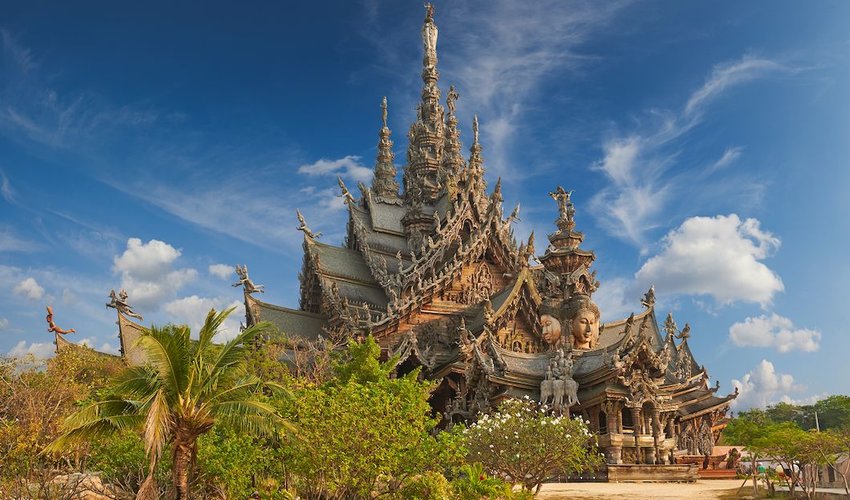 The Most Ornate Buildings in the World

Buildings, like sculptures and paintings, can be stunning works of art. Eye-catching pictures of the most ornate buildings inspire us to travel the world in search of extravagant palaces, cathedrals, and other incredible feats of architecture. From the opulent Catherine Palace in St. Petersburg to the intricate wood sculptures of the Sanctuary of Truth in Chonburi, Thailand, join us for a tour of the most ornate buildings in the world.

La Sagrada Família is a giant basilica in Barcelona that was so ambitious in its design that it's still under construction over 100 years after construction started. This ornate Roman Catholic church was designed by Spanish/Catalan architect Antoni Gaudi to imitate nature so you won't find a straight line in this architectural marvel. The interior is just as stunning, featuring tree-like columns that remind visitors of a forest. Construction began on the basilica in 1882 and is not likely to be fully completed until  2026.

San Marco Basilica is one of the most famous churches in all of Italy, and its Italo-Byzantine architecture is genuinely dazzling to the eye. Because of its lavish design and remarkable gilded mosaics, its nickname is the Chiesa d'Oro, "Church of Gold." The basilica was originally built in 828 to house the relics of St. Mark that were allegedly stolen by Venetian merchants from Alexandria. San Marco burned down in 976 A.D. during an uprising and has been rebuilt twice since then. The present church was completed in 1063 A.D. and was Doge of Venice's private chapel until 1807.

If you want to see what has become the ultimate symbol of Russia, head to the southern end of Red Square in Moscow, where you'll find St Basil's Cathedral. It's a challenge for visitors to take in the classic Russian architecture which includes bright colors, patterns, and shapes, but is well worth the time spent exploring this iconic landmark. Ivan the Terrible commissioned this church, officially known as the Intercession Cathedral, to commemorate his 1552 victory over the Tartar stronghold of Kazan on the Feast of Intercession. This ornate work of art was completed in 1561 and has become one of the most visited buildings in Moscow.

The Sanctuary of Truth is a must-see if you are looking for a mind-blowing work of art. It is the only wood-sculpture building on the planet built without any metal nails. The Sanctuary of Truth's intricately-carved wood commands a sweeping view of the ocean and is both a religious shrine and cultural treasure of Thailand. This elaborate structure is relatively new when compared to other works featured in this article. It has been under construction since 1981 and is still having finishing touches made to the temple complex. One of the highlights of the site are the wood carvings of Hindu and Buddhist gods. Don't miss the Thai dancers who perform daily.

The Catherine Palace is the jewel in St. Petersburg's crown. The complex is part palace, part park, and displays all the magnificent beauty of its Russian Baroque style. The highlight of the palace tour is the exquisite Amber Room, created by renowned Charles Cameron for Empress Catherine II. This living museum covers 300 years of Russian history was returned to life after World War II destroyed most of its halls. You'll feel the spirit of Catherine the Great as you walk the halls, admiring the luxury of the bygone era of the Russian monarchy.

Gresham Palace in Budapest has a unique story to tell. It was originally built in 1906 as the foreign headquarters of the Gresham Life Assurance Company of London, as well as a home for wealthy company aristocrats. After World War II, Soviet soldiers took up residence in this ornate palace, and it eventually fell into disrepair. Later it served as an apartment building during Hungary's Communist rule. After a $125 million face lift in 2004, Gresham Palace is now the luxurious Four Seasons Hotel and one of Europe's finest places to stay.

The glorious Kölner Dom is a masterpiece and one of the most stunning Gothic cathedrals in Europe. Architects built this UNESCO World Heritage Site in the trademark Gothic style of a Latin Cross. Its soaring twin spires dominate the skyline of beautiful Cologne while keeping watch over the Rhine River. If you want to get a birds-eye view of the city and aren't afraid of a steep climb, take the stairs to the top of Kölner Dom. The interior is just as impressive, and its 104-seat medieval choir stalls are some of the largest still in existence.