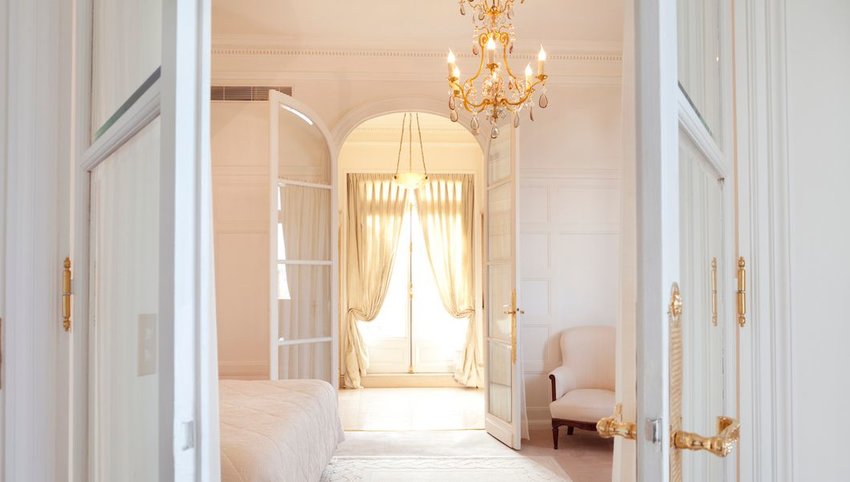 The Most Expensive Hotel Rooms in the World

In terms of hotel rooms, the sky's the limit when you have deep enough pockets. These exclusive suites and penthouses around the world reach new heights of extravagance. Expect unparalleled views, access via private helicopters and 24/7 private butler service. With prices starting from more than $20,000 and reaching an eye-watering $80,000 a night, they may be out of reach for us mere mortals, but that doesn't mean we can't dream.

London is fairly accessible for all, from the budget-conscious to unlimited budgets, but you can get pretty swanky in the city's many luxury hotels. Even by London standards though, the $24,000 a night price tag for The Apartment at the Connaught Hotel in luxurious Mayfair is pushing it. Expect an elegant blend of old meets new with a wrap-around balcony and a private butler thrown in for good measure.

Lavish and sophisticated – few hotel rooms measure up to the 9,795-square-feet Prince Grace Suite at the Hotel de Paris Monte-Carlo in Monaco. The exclusive pad has everything from a private terrace overlooking the ocean to private sauna and steam rooms. Aptly-named after the elegant Princess Grace of Monaco, all you need is $40,000 and you could nab the suite for a night.

If modern décor isn’t your bag and you’ve got $40,000 a night to splash out on a New York hotel, The Royal Suite at The Plaza might be right up your street. The whopping 4,400-square-feet apartment is decked out in Louis XV-inspired decorations. Expect lots of gold fixtures, marble and floral-patterned furnishings. Plus, it’s reached by a private elevator.

It might not look like a typically luxurious hotel room (particularly for the $41,000-a-night price tag), but don’t be fooled. This suite in the Hotel Cala di Volpe comes complete with a private swimming pool, a solarium and a private wine cellar in the 2,690-square-feet suite. Kick back on the sunny terrace and take in the achingly beautiful Costa Smeralda. The hotel was designed by French architect Jacques Couëlle in the 1960s to look like a Mediterranean fishing village, so you can have all the quaint and cozy vibes you want with your luxury.

The exclusive Terrace Suite at The Mark in New York City is 4,788-square-feet extraordinary lavishness. Expect five en suite bedrooms, a vast bespoke kitchen and marble as far as the eye can see. However, the real highlight at the outdoor spaces including the skylight pavilion, an enormous terrace which looks straight out over Central Park. At $75,000 a night, you’ll need seriously deep pockets if you’re going to score a stay at The Mark.

The best of the best is found at the Royal Penthouse Suite in the Hotel President Wilson in Geneva. At a cool $80,000 a night, the suite is considered the most expensive hotel room in the world. As you can imagine, there are few amenities that aren’t available to you. Bathe in a hot tub overlooking Lake Geneva, make use of the complimentary Hermès toiletries and kick back with a rare book in the suite’s library.