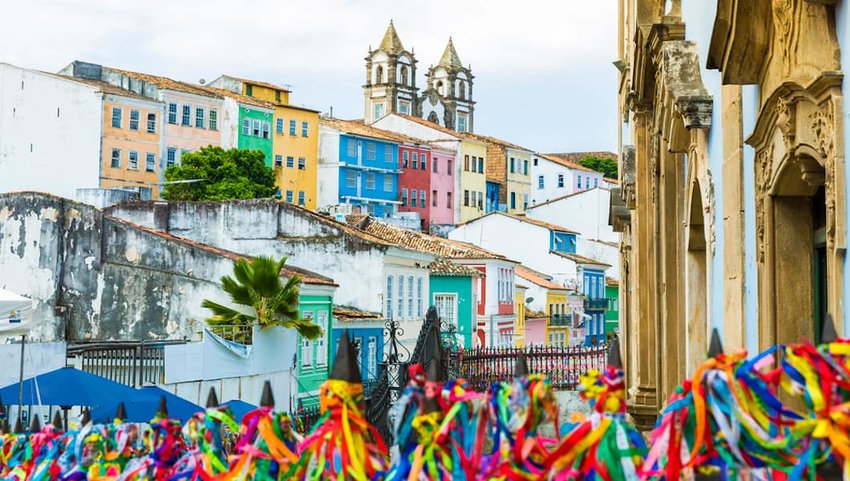 The Most Colorful Cities in South America

South America is a huge continent made up of 12 sovereign states, 10 of which have heavy influences from Spanish and Portuguese traditions alongside their own indigenous cultures. These Latin nations are proud to express their lively and flamboyant customs through everything from architecture to the performing arts. Inject some color into your next trip by visiting these colorful cities.

The Argentine capital is a seductive metropolis where European and Latin traditions blend harmoniously. Colonial-style palaces rub shoulders with time-honored cafes and steakhouses frequented by coffee-sipping locals animately discussing politics and soccer. Head to La Boca, a port neighborhood characterized by multicored houses painted by early Spanish and Italian immigrants using paint found at the docks. Artists, street performers and tango dancers ply their trade here and in nearby San Telmo, where a Sunday artisan market stretches for over a mile. Over in Palermo, quirky fashion boutiques vie for space with craft beer bars and eclectic restaurants along cobblestone streets. Visit in November, when the violet flowers of the jacaranda trees are in full bloom across the city and signal the arrival of spring.

Cartagena flows down from lush mountain slopes to Colombia’s Caribbean Sea coastline. During the colonial years the city prospered from the riches of gold trading and many landmarks stand as reminders of the era. Just make your way to the UNESCO-protected Old Town (Centro Historico) to discover a labyrinth of atmospheric streets set amid defensive walls. Pastel-hued colonial houses with flower-filled balconies epitomize the quaint setting. Don’t be surprised to see fruit ladies stroll by dressed in traditional clothing and headwear. Music and dance is engrained in the daily lifestyle in the Colombian Caribbean and there’s diverse festivals throughout the year. There’s beaches, too. Jump on a boat to reach the glorious washes of white sand on Isla de Barú and snorkel in the pristine natural aquarium of Isla Rosario.

Ecuador’s bustling capital city sits at a height of 9,350 feet above sea level encompassed by the Andes mountains and Pichincha volcano. Beneath this spectacular natural setting is one of the best preserved historic quarters on the continent. Magnificent municipal and religious landmarks decorate the palm-shaded Independence Square (aka Plaza Grande). Snack on bowls of citrus-heavy shrimp ceviche while admiring the cityscape from a pavement cafe. La Mariscal Craft Market serves up the chance to shop for Andean souvenirs, handcrafted musical instruments, llama-wool clothing, textiles and more. Hop between the chocolatiers, silversmiths, bohemian cafes and live music venues on Calle la Ronda. Marvel at the urban landscape and mountain countryside on the Quito Cable Car.

Salvador is the heart of Brail’s Afro-Brazilian culture and a city that dances to the beat of its own drum. Established by the Portuguese in 1549, Salvador served as the nation’s capital for over two centuries. It was also one of the continent’s earliest slave ports, which resulted in the strong African customs of today. There’s no better place to experience this blend of colonial and African heritage than in the vibrant Pelourinho (aka Pelô) district. Caipirinha bars and Afro-Brazilian shops elbow up against Portuguese-built palaces on the cobblestone lanes. Snack on acarajés (stuffed deep-friend beans) served by Bahian women, watch impromptu capoeira shows and discover African roots at the Afro-Brazilian Museum. Shop at over 200 stores at the Mercado Modelo and kick back on the beaches of nightlife-centric Barra.

Brightly-painted houses appear like mismatched towers and spill down a hillside to the South Pacific Ocean in Valparaíso. Valpo flourished as a seaport in the late-1800s and passing sailors christened it with the nicknames Little San Francisco and Jewel of the Pacific. Today it displays a fading grandeur and is a paradise for street art enthusiasts. Ride antique elevators and funicular railways into the hilly suburbs to find houses, shopfronts and street walls decked in extravagant murals. There’s some fine examples on Calle Templeman and at the Museo a Cielo Abierto open-air museum. Delve into the life of the acclaimed Chilean poet Pablo Neruda at the Casa Museo La Sebastian house museum. Then check out the organized chaos of Mercado El Cardonal food market and sip on Pisco sours and craft beer at downtown pubs.