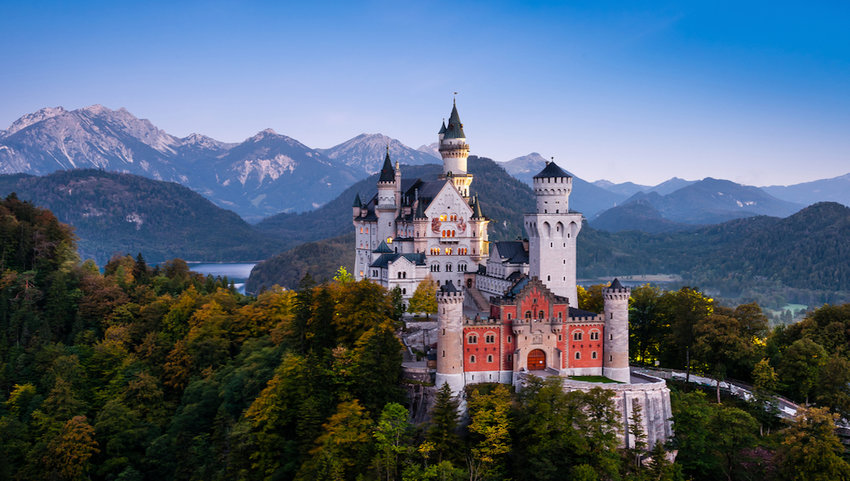 The Dramatic History Behind Neuschwanstein Castle

One of the most popular palaces in Europe was built as a fortress a — kingdom — for a single man. Now, 1.4 million people visit the castle in Germany each year.

Not only is Neuschwanstein Castle a beautiful palace nestled in an idyllic setting, but it has a torrid history that involves a war, a king struggling to maintain power, immense debt and the ultimate creation of a fantasy land.

Why It Should Be on Your Radar

Whether you've heard of it or not, Neuschwanstein is one of the most iconic castles in the world. Photographs from every angle grace Instagram accounts, and it seems no photography trip to Germany is complete without a visit to its hallowed halls. The palace was built to make King Ludwig II’s fantasies come true. Perched on a steep cliff and adorned with intricate paintings that depict the king’s favorite stories, the castle conveys a home fit for the king.

If that's not enough to entice you, the castle also reportedly inspired one Walt Disney, who based his design of Sleeping Beauty's castle on the fortress. Everything about this destination, it seems, comes straight from a fairytale.

In the late 1800s, in the southeast corner of Germany, King of Bavaria Ludwig II wanted to build a castle. After Bavaria and its allies lost a brutal war to Prussia in 1866, the king lost the ability to control his own army.

Ludwig II considered this the greatest defeat of his life, and he set out to reclaim his power by placing tremendous focus on planning his own kingdom. Thus, New Hohenschwangau Castle — the castle's original name — was born, one of many structures the king commissioned during his lifetime. Ludwig II retreated further and further from the public eye, becoming something of a recluse, obsessed with the illusion of power his castles gave him.

Hohenschwangau Castle was special, though. It was built on Ludwig II’s favorite spot as a child, near the ruins of two old castles that overlooked his family’s summer home. “The location is one of the most beautiful to be found, holy and unapproachable,” the king wrote in a letter. “I am looking forward very much to living there one day.” 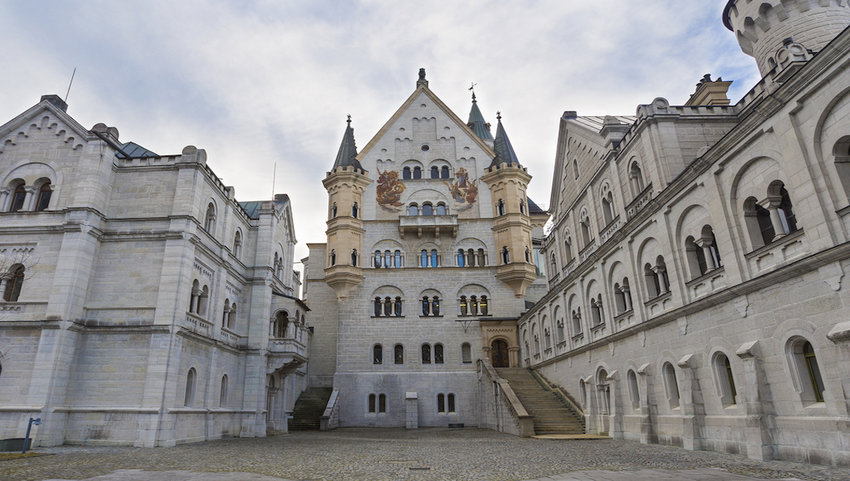 The castle's design was a romantic tribute to the Middle Ages and was inspired by Ludwig II’s favorite stories, largely those by the writer and composer Richard Wagner. It also incorporates the king’s proclivities for legends, swans and knights. Ludwig II himself listed the features he wanted for the palace in a letter to Wagner, and he remained heavily involved in the planning of the castle. Under Ludwig II’s vision, the castle became grand and expansive.

With Gothic and Romanesque features, the structure features a mix of geometric designs and delicate embellishments. And while it was built to look old, no expense was spared in making sure it had all the modern comforts that could be offered in the late 1800s.

It took more than two decades to build and, despite its considerable size, didn’t have much space for company. Plus located near the top of a mountain, it didn’t see many visitors, which is just how Ludwig II wanted it.

Sadly, though he'd spent nearly 20 years building this dream palace, Ludwig II spent a mere two weeks living in the fortress before, mired by immense debt from his extensive building projects, he died under mysterious circumstances.

Several wings of the building remained unfinished, and Ludwig's debts threatened to turn the grand palace into little more than a ruined experiment.

However, shortly after his death, the Bavarian government opened the castle up to visitors for a fee. Within a couple of years, the costs of admission covered the debt Ludwig had created during his mission to build a dream.

Today, complete with a decadent throne room, a grotto and a conservatory, along with one seriously lavish bathroom, the castle remains open and is one of the region's most popular tourist attractions.

To get to this secluded palace, you have to stop in the village of Hohenschwangau to buy a ticket and park. Then you walk, shuttle or catch a horse-drawn carriage the rest of the way (remember it can get crowded, so buy your ticket in advance.) But from the village you can also visit Hohenschwangau Castle, Ludwig II’s childhood home, and trails will take you to Marienbrucke, a bridge with sweeping views of the idyllic scenery straight out of a fairytale.

It’s worth the trip to see this castle, born from King Ludwig II’s fantasies and crafted into being, seemingly, through sheer force of will.