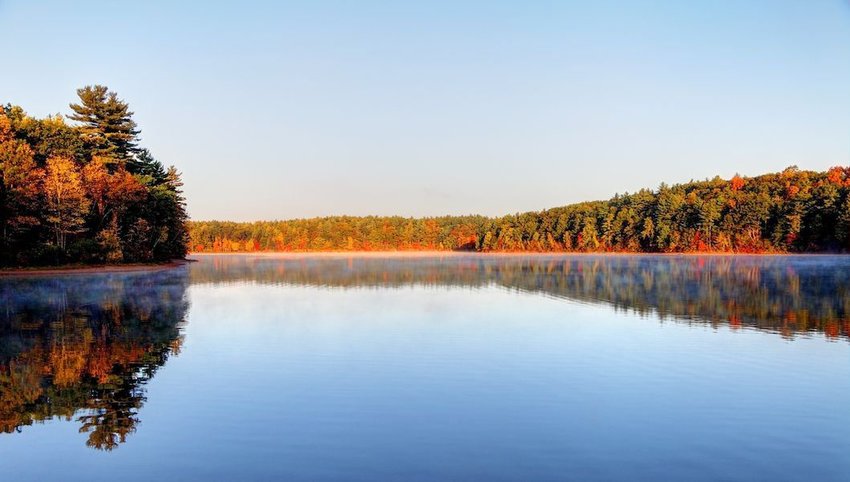 New England, in addition to its history and charm, has been home to many a famous writer throughout the years. In fact, there is so much literary distinction to be found in the northeast that an entire trip can be constructed around the region’s illustrious writers and poets.

That’s why we’ve created a New England road trip dedicated to all the poetry lovers and bookworms out there. If a trip like this is calling your name, check out our road trip map and then read on to learn about our recommended stops along the way.

The road trip begins at the home of Samuel Clemens, better known by his nom de plume, Mark Twain. Located in Hartford, Connecticut, the Mark Twain House was designed by Clemens and his wife and built in the early 1870s. This house was where Clemens wrote some of his most famous works, including The Adventures of Tom Sawyer and Adventures of Huckleberry Finn, and it's said to be where the Clemens family spent their happiest years. Visitors can tour both the house and museum to see how the Clemens family lived and to learn more about the author’s life and works.

Poetry fans will love the road trip’s second stop, the Emily Dickinson Museum in Massachusetts. The museum is located in two homes — the Homestead, where Emily was born and raised, and the Evergreens, where her brother lived as an adult with his family. Notoriously reclusive, Emily spent much of her time at home, which allowed her to write almost 1,800 poems over the course of her life. History buffs and Dickinson fans should plan on signing up for a tour, which includes the houses and gardens. It's also filled with many interesting anecdotes about the writer and her family.

The Louisa May Alcott Orchard House is the site where the famed author wrote the beloved classic, Little Women. The grounds for the home were purchased by Alcott’s father in 1857 and later named “Orchard House” for the 40 apple trees on the property. The Alcott family lived in this home for 20 years, during which time Alcott wrote her novel at a special “shelf desk” built by her father. There has been little structural change to the home since the Alcotts lived there, and since much of the furniture actually belonged to the family, Little Women fans will feel like they've stepped into the pages of their favorite book.

A brief drive from the Orchard House is Walden Pond, made famous by Henry David Thoreau’s book, Walden; or, Life in the Woods. The non-fiction publication details the two years Thoreau spent living simply in the woods on Walden Pond and, as a body of work, cemented Thoreau’s place in the transcendentalism movement. Although the cabin where Thoreau lived was torn down, you can walk to the site where it once stood. Best of all, visitors may also swim in the pond or walk on the trails to see the world through the same lens as the literary legend.

Next, hop on Route 2 and drive 20 minutes east to Mount Auburn Cemetery, which lays on the dividing line of Cambridge and Watertown. Founded in 1831, the cemetery was, and still is, a prestigious burial site for prominent and intellectual Bostonians. Famous writers interred at Mount Auburn include Henry Wadsworth Longfellow, Robert Creeley and Harriet Jacobs, in addition to other noteworthy names like painter Winslow Homer and preacher William Ellery Channing. Moreso, the cemetery is a lovely place to spend an afternoon, with walking paths, mature trees and beautiful landscaping throughout the 170 acres. It’s also a hotspot for birdwatching enthusiasts, and in the springtime when the many trees are blooming, it is a beautiful sight to behold.

The House of the Seven Gables

Salem, Massachusetts, home to the notorious Salem Witch Trials, is the perfect setting for the next stop on our road trip, The House of the Seven Gables. Susanna Ingersoll, second cousin of author Nathaniel Hawthorne, once lived in this house, which served as the inspiration for Hawthorne’s Gothic novel of the same name. Originally built in 1668, the house has been meticulously restored by the museum, as they have worked diligently to recreate the rooms in an authentic manner. Best of all, the museum added a hidden staircase behind the fireplace, just like in Hawthorne’s book. Visitors may partake in a 40-minute guided tour which includes the House of the Seven Gables and its seaside garden, in addition to the nearby birthplace and childhood home of Hawthorne.

As the renowned poet lived all over the region, New England is filled with Robert Frost homesteads. For the purpose of convenience, however, this road trip stops at the Robert Frost Farm in Derry, New Hampshire. This charming farmstead was home to Frost and his family from 1900 to 1911. Visitors must partake in a guided tour to see the inside of the farmhouse, which takes about 45 minutes. The grounds are available to tour from dawn to dusk and include a self-guided nature trail, which indicates points of interest that served as inspiration for Frost’s poetry.

Tucked away on Congress St. in Portland, Maine, sits the birthplace and childhood home of famed poet, Henry Wadsworth Longfellow. Now home to the Maine Historical Society, the Wadsworth-Longfellow House was built by Longfellow’s grandfather in 1785. Since that time, three generations of the family have resided within these walls and nearly all the home’s artifacts and items belonged to members of the family. Set amidst a commercial area of Portland, it is the oldest house to still stand on the city’s peninsula. Behind the house is a lovely Colonial Revival garden that is free to the public during daylight hours. Plant enthusiasts will love the garden’s Plant Identification Guide, which can be used to understand and identify the garden’s blooms.

The final stop on our bookworm road trip brings us into the 21st century with the Stephen King House in Bangor, Maine. Horror fiction fans flock to this eccentric home, where the author resides part-time with his wife. Although the home is not open for tours, it’s a worthwhile stop. The impressive mansion is delightfully eerie,  with an expansive lawn and a spiderweb wrought iron gate. King devotees might even go a step further and take an SK Tour of Maine, which stops at three dozen King-related sites in the span of three hours.