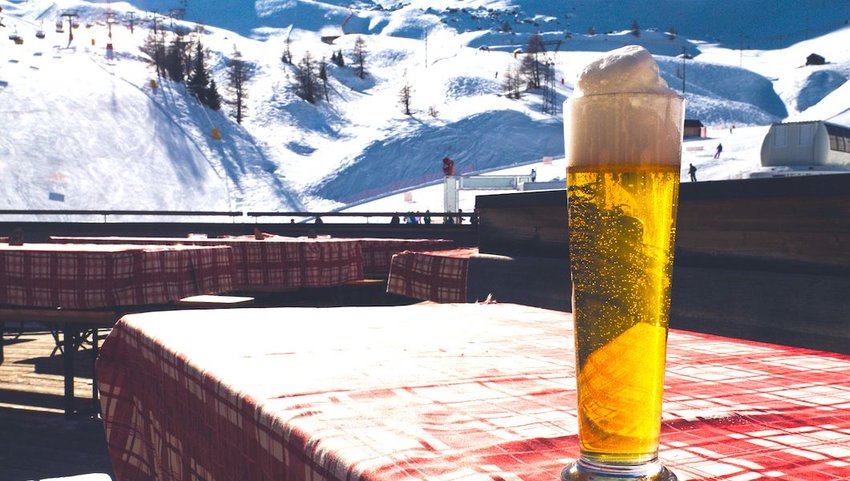 The Art of Après Ski

Skiing. Snowboarding. Snowshoeing. Any chilly exertion in the snow calls for soothing, warming post activities and remedies. Due to this, after-ski recovery has risen to the level of art. Some places are well known for their hedonistic approach to unwinding after a hard day on the hill. Individual après needs certainly vary with personal style, but whether you prefer to lounge in front of a roaring fire with cocoa or hit the dance floor at the hottest club on the mountain, there’s something for every taste.

It probably wasn’t even called après ski back in the day, but the first time a savvy skier schussed to the bottom of a slope and pulled out a flask for refreshment, the phenomenon was born. Après ski, of course, simply translates from French to “after ski.” French-speaking areas of the Alps are at the heart of après-ski culture and tradition, but don’t be surprised to see a fondue picnic as after-ski sustenance in Switzerland, which also has a deep skiing history.

Chamonix, France, is an international favorite, revered by many skiers as the top free-ride resort on the planet. Listing bars, tearooms and discotheques under the things to do on its website, Chamonix is vested in multiple après-ski traditions. Actually five separate resorts around Mont Blanc, Chamonix Ski Areas and Resorts cover a lot of territory (literally). Given that, après ski and nightlife options range far beyond the disco. A casino, a three-screen movie theater and a bowling alley are all options after the sun goes down. Of course, relief for post-ski aches is only a massage, spa service or hot tub away, with world-class facilities and staff ready to soothe.

Even if you’ve never heard specifically of Zermatt, Switzerland, you have undoubtedly heard of the Matterhorn, which towers above the tony resort. In the mighty peak’s shadow, an array of nightclubs is joined by more than 60 bars and 100 restaurants, offering an unparalleled après-ski, nightlife experience. Aside from the rowdy revelry, relax in multiple jacuzzis, swimming pools, spas and saunas at newly-opened facilities throughout the resort’s hotels.

St Anton, Austria, is a renowned European ski destination, lauded both for its expert slopes and vibrant après-ski options. With bar and restaurant names such as Das Basecamp, Funky Chicken, the Skiing Buddha and the Museum, how could you not find a good time here? A perennial top ski destination, St. Anton is actually several hamlets forming a long, linear resort village. The central portion is pedestrian only, with plenty of shopping, dining and Alpine character. One of the original and most important resort areas in the Alps, St. Anton is known as “the cradle of alpine skiing.” On-mountain après is available 500 meters, or some 1,600 feet, above the village, at the Mooserwirt and Krazy Kanguruh bars.

A more downscale and relaxing post-mountain vibe is on offer in Sauze d'Oulx, Italy. Bars and clubs here provide a hearty party, but there are also a variety of inexpensive restaurants and pizzerias. Among them is Caffe della Seggiovia, an Italian wine bar serving bold reds from the nearby Piedmont region with a selection of small plates, including free noshes during aperitivo hour. One of the largest and most popular resorts in the area, Sauze d’Oulx also features fine-dining with 10-course dinners, so there are upscale options. As for deep relaxation, the area’s abundant chalet, apartment and hotel accommodations — many within skiing distance to the slopes — feature their own fireplace, hot tub and spa amenities.

British Columbia’s Whistler is so renowned for its after-ski extravagance that a 2015 Bravo show titled “Après Ski” punked the resort’s exotic extremes (check Youtube). The spoof comedy lasted only a season, but making your way around Whistler Blackcomb Resort, it’s easy to see why Whistler developed its reputation for excess. It’s especially evident when you go all in, unwinding in style at the mountain’s swanky Scandinave Spa. Notable names like Four Season Resort Whistler Spa and Avello Spa & Health Club by Westin are in the lux massage mix, as well. From the steam room to blowing off some steam, Whistler continues to impress. Venerable venues here include Dusty’s Bar & BBQ, Garibaldi Lift Co., Bearfoot Bistro and High Mountain Brewing Co., which also has a distillery and restaurant on site.

Other prime mountain states have their own après style. In Jackson Hole, Wyoming, “Forbes Traveler” named the Mangy Moose Saloon among the “10 Hottest Après Ski Bars in the World.” A quintessential Teton Village watering hole, the Moose is known for live music and a hearty steakhouse dinner menu. A rustic lodge facade encloses an eclectic interior, which accommodates a grocery and wine shop in addition to all the après action.

Meanwhile, Park City, Utah, holds its own for being in a fairly conservative area. Heck, you can ski right into the High West Distillery for a shot, and utilizing the Town Lift service as a designated driver is not at all frowned upon — even in full ski attire. For a more extravagant way to unwind, wine tastings and charcuterie plates await at the Farm at Canyons Village. The resort base features live music and dancing at the Spur Bar & Grill and O.P. Rockwell. In town, Main Street in Park City proffers many more nightclubs and pubs, from Western bars to intimate wine bistros.