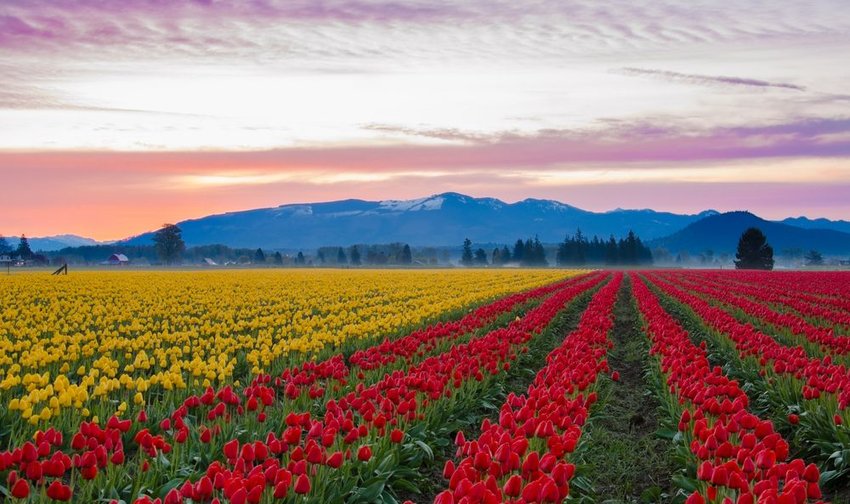 The 15 Most Colorful Places in the U.S.

From multi-hued canyons to elaborately-decorated streets, there are hundreds of places in the U.S. that leave visitors spellbound by a vivid presentation of colors. Some appear so beautiful that you’d be forgiven for believing that they have permanent filters attached to them. Check out these 15 colorful spots you don't want to miss when traveling around the country.

The horseshoe-shaped, russet rock hoodoo formations of Bryce Canyon National Park are a true sight to behold. This is one of the world’s highest concentrations of hoodoos and their colors alternate between shades of purple, red, orange and white. One of the most rewarding ways to admire these geological wonders is to hike to Sunrise Point and its panoramic lookouts where you can witness the magic of the sunlight hitting the rocks.

Did you know that cranberries grow on vines in bogs formed by glacial deposits? There are over 14,000 acres of these bogs in southern Massachusetts and in the fall, they turn into spectacular carpets of burgundy. When harvest comes around, farmers wade into the bogs and bag up the berries that have risen to the top. Experience the eye-catching splendor of this marvel and learn about an important aspect of American history by taking a cranberry bog tour.

Once an area of factories and warehouses, artists began to open art studios in this district in the 1970s ⁠— leading the neighborhood to become the designated Downtown Arts District. Street art, which ranges from murals that cover entire buildings to hidden alleys, is key to the district’s hip vibe. There are contributions from El Mac, Tristan Eaton, the UTI Crew and other recognized graffiti artists. Complementing the graffiti are galleries, museums and the edgy Angel City Brewery.

Being nestled in New England makes the state of Vermont an ideal spot for admiring the fall foliage. Forests cover three quarters of the state, so there are no shortage of places to discover the brilliant shades of gold, red and orange of the sugar maples. But if you have to choose one destination, then make it Stowe. The image of the whitewashed Stowe Community Church set against a forested backdrop is emblematic of the town.

The oldest and most eclectic quarter of New Orleans is an architectural gem characterized by colorful townhouses and colonial homes with wrought-iron balconies. Simply amble along Bourbon Street and Decatur Street to find dozens of examples — many of which double up as antique stores, bars, hotels and restaurants. Adding to the French Quarter’s color is round-the-clock entertainment at the many jazz clubs and year-round parades — namely the world-famous Mardi Gras festival.

It may look like a work of abstract art in photos but the Grand Prismatic Spring is actually a thermal spring located in Yellowstone National Park. The rainbow of orange, yellow and green rings that form around the deep-blue pool comes from a presence of heat-loving bacteria. Larger than a football field and 121-feet deep, it is the world’s third-largest spring and quite the spectacular sight.

In the remote Alaskan panhandle is perhaps the most famous glacier in the U.S. Mendenhall Glacier stretches for over 13 miles from the Juneau Icefield to Mendenhall Lake. Strapping on a pair of crampons and walking on the glacier is a must. On clear and sunny days, the glacier looks incredible set against a backdrop of snowy peaks. Get here when there are clouds in the sky and you’ll be treated to dense blocks of ice and striking caves that mesmerize you with varying shades of blue.

A fairytale-like charm radiates around Oak Bluffs, an upscale village community on the northern coast of Martha’s Vineyard. Brightening up the village is a collection of over 300 storybook gingerbread cottages built in the Carpenter Gothic style. While many are still private residences, several play host to artisan shops, ice cream parlors and quaint cafes. Enhancing the vintage ambience is the Flying Horses, a working carousel brought from Coney Island.

A stroll along fashionable Ocean Drive in Miami is like stepping back into a 1930's Art Deco wonderland. With soft pastel hues and bright neon signs, the avenue’s hotels and private residences are offset beautifully by the lush green lawns and palm trees. One of the most notable addresses is the former home of Gianni Versace and The Carlyle, which featured in movies such as Scarface and The Birdcage. Hop over to South Beach after to see the brightly-painted lifeguard towers.

The multicolored hillsides of the Painted Hills form part of the John Day Fossil Beds National Monument and are one of the Seven Wonders of Oregon. These smooth rock hills appear to be painted with layers of black, orange, red and tan-colored stripes and the hues can differ with the changing light of day. Each layer is the aftermath of geological eras from when the region was a river floodplain. Discover them via trails that vary in length from a quarter mile to 1.3 miles.

The Painted Ladies are a row of elegant Victorian-style houses that stand out with their pastel blue, green, purple and yellow facades. They frame the east side of Alamo Square Park to create one of San Francisco’s most photographed sights. The scene is even more impressive at sunset with the city skyline as a backdrop. Television buffs will recognize the houses from the opening credits of Full House and scenes from the 1994 sci-fi romance Junior.

There are only four known instances of green sand beaches on earth and one of them sits close to the southernmost tip of Hawaii’s Big Island. The olive green color of the sand at Papakōlea Beach occurred following a volcanic eruption and the beach is located with the remains of the cinder cone. Bring your swimming costume and splash around in the waves or have fun clambering up the volcanic rocks. You have to travel to Guam, the Galapagos Islands or Norway to see another green sand beach.

Boasting a landscape of Antebellum, Georgian and Greek Revival treasures, the Charleston Historic District has postcard-perfect images at the turn of every corner. Rainbow Row is a delightful street of 13 Georgian townhouses painted in bright pastel colors on East Bay Street downtown. Once used by merchants, the houses fell into abandonment after the Civil War until a local judge and his wife purchased a house and painted it pastel pink in 1931. Their neighbors took to the idea and duly continued the trend.

Head to northwest Washington state in April for the Skagit Valley Tulip Festival, an event that gives the tulips of the Netherlands a run for their money. Tulips have been farmed here since the early 1900s and today, over a million bulbs are planted at RoozenGaarde and Tulip Town alone. Download a brochure from the festival website and plan your visit around the fascinating displays of red, pink, orange, yellow and white flowers.

Texan wildflowers are at their most spectacular during the springtime bloom along the 13-mile Willow City Loop road. The loop meanders around creeks and hills with unprecedented views of meadows that explode with blue, purple, pink, red and white flowers. Most remarkable of the flowers is the purple flowering bluebonnet, the official state flower of Texas. It doesn't get more stunning that this.