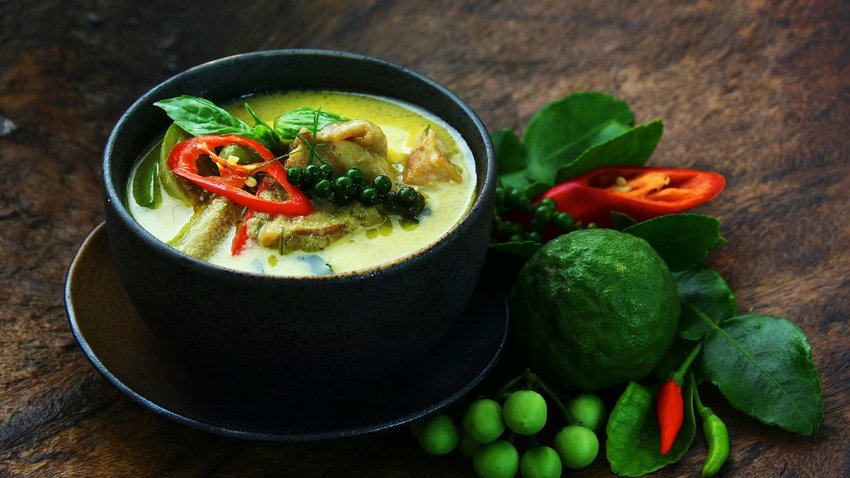 How to Make Thai Green Curry At Home

Green curry is a Thai staple; if you’ve ever visited this South East Asian country, you’ve most likely enjoyed the dish locals call kaeng khiao wan (also written as gaeng keow wahn). If you’re looking to spice up your lockdown experience, here’s how to make Thai green curry at home.

The Origins of Thai Green Curry

Though the word kaeng– a watery dish to be eaten with rice – made it into Thailand’s first dictionary in 1873, it took a while longer for the sweet green variant to appear. In actual fact, the recipe for green curry scores an entry in Thai cookery books less than a century ago. The country was then known as Siam and it was probably during the reigns of King Rama VI and Rama VII, in the early part of the 20th century, that the dish was developed.

But curry has been around in Thailand for much longer. Long before the Europeans introduced chilli peppers brought from South America, the spicy flavour came from peppercorns, ginger and galangal (sometimes referred to as Thai ginger but not quite the same). The predecessors to those first curries were water-based dishes using fermented fish, kapi (Thai shrimp paste), shallots and garlic. Once chillies were on the scene, the dishes were modified into the spicy, salty red Thai curries we also know today.

Unlike other Asian curries, this is a mellow dish. It has a creamy texture, thanks to the use of coconut milk to produce a base. It’s still hot, but that heat is offset by a sweetness which makes it popular with westerners, so it’s no surprise that this is a favourite among amateur cooks keen to reproduce Asian flavours at home.

Should You Prepare Your Own Paste?

Some of these ingredients you’ll recognise, and will be able to easily find at your regular supermarket. But for the likes of galangal and kapi, you might need to use a specialist supplier. Due to the number of ingredients required, some people use a readymade paste for the convenience. If you plan to do so, it’s worth knowing that Mekhala’s Organic Green Curry Paste was recently voted the best of nine in a taste test by the foodies at epicurious.com.

How To Cook Your Curry

First, toast the spices and use a pestle and mortar to crush the ingredients. This action releases the natural oils in a way chopping cannot, and improves the taste. You can also cheat and use a food processor for at least part of the process, if you wish. However, the more you can do in the pestle and mortar, the better the end result, as a food processor will always chop rather than pound, no matter how finely it does so. If you’re not making it from scratch, use a couple of tablespoons of ready-prepared curry paste. Once the packet is opened, the paste will still last several months.

Next, fry off the paste in some hot oil to boost the flavours. Some chefs prefer to split the coconut milk and use the fat instead of oil to do this. Alternatively, adding sugar helps to give the green curry its signature sweetness, but you can also caramelise the sugar in a hot pan before adding and cooking off the paste. This intense heat again helps give the finished curry added zing.

To the curry paste, add the coconut milk and some fish sauce; bring it to the boil and then turn down the heat to a simmer. It’s now time to add the protein. Typically this is chicken, and thighs are your best bet. Some chefs suggest browning the meat first, while others cook it wholly within the liquid. Incidentally, there’s no reason you can’t substitute chicken with pork, beef, fish or even tofu. Note that if using the latter, the fish sauce means it’s not a vegetarian dish.

Finally, add vegetables such as eggplant or mangetout peas, and finish off cooking. When your Thai green curry is ready, the chicken will be cooked through. At this point, add some herbs such as kaffir lime leaves and Thai basil for decoration together with some chopped chillies for an added kick if required. If it’s too spicy, add a little coconut milk, and warm through. Serve with lime wedges and a bowl of jasmine rice.