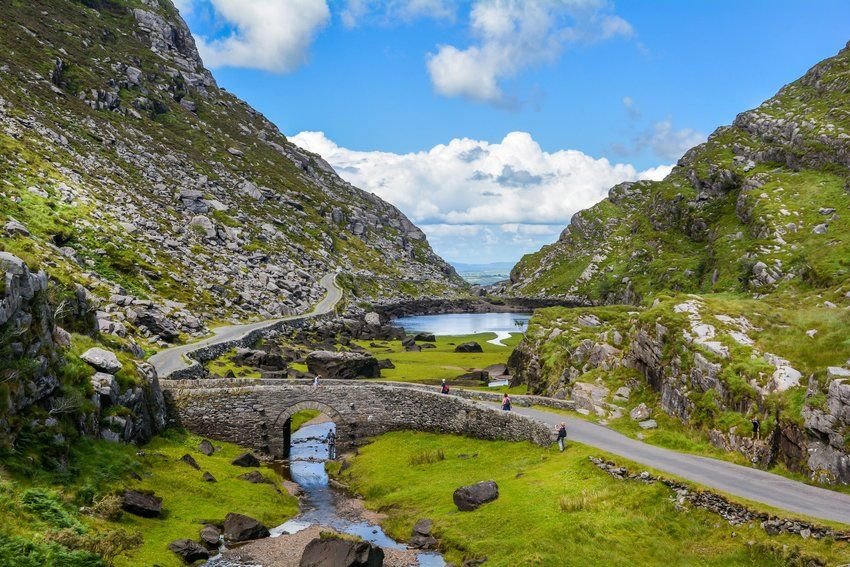 You know that Ireland in general is beautiful, but what of the Ring of Kerry? A 111-mile circular route in County Kerry, it's especially popular as a day-trip destination in the summer months. As these sights make clear, though, there's enough there to keep you occupied for weeks on end.

Much of this small castle's history is unknown, which only makes it more intriguing. In use since 1398, it was rebuilt in the 16h century, attacked by cannons during the War of the Three Kingdoms in 1652 and demolished in the early 1900s. That it now lies ruined doesn't stop visitors from appreciating its strange beauty — or prevent cows from grazing in the surrounding grasslands.

More than 1,000 feet high and 400 million years old, the Kerry Cliffs are one of Ireland's most stunning landmarks. As luck would have it, they also offer views of two other worthy sights: the Skellig Islands and Puffin Island. You can see for 30 miles in any direction, not that twitchers will need to look that far to observe the colonies of cliff birds.

A tiny village noted for its gorgeous scenery, Caherdaniel has been active in one way or another for thousands of years — nearby copper-ore mines date back to 2000 BC. You can feel that history as you walk its paths, thankful that it's not so industrial these days.

Today it's part of Killarney National Park, but in 1932 it was Ireland's first National Park, period — and for good reason. Built in 1843 and stately in a way Downton Abbey fans are sure to appreciate, Muckross House has gone through several changes over the last century and a half while maintaining its pastoral beauty. There are gardens and working farms, all of it a stone's throw away from the lovely Lakes of Killarney.

Kenmare Bay means "head of the sea," a name it more than lives up to. The town itself is home to just 2,400 people but attracts more than its fair share of tourists, most of whom are drawn by the bay's deep blue waters.

Also part of Killarney National Park is Ross Castle, which was built in the 15th century by O'Donoghue Mór. It changed hands due to events like the Second Desmond Rebellion and the Irish Confederate Wars, but remains standing after withstanding many attacks. Today it's a popular — and, battlefield history notwithstanding, peaceful — destination for visitors.

This narrow mountain pass runs nearly seven miles, and like nearly everything else in the Ring of Kerry, has an even cooler Irish name: Dún Lóich, or Lóich's Stronghold. The Gap of Dunloe separates two mountain ranges — the Purple Mountain Group in the east, MacGillycuddy's Reeks in the west — and can be traveled on foot, horseback, or in a car. In addition to the Wishing Bridge, keep an eye out for sheep.

Skellig Michael and Little Skellig form the westernmost part of Europe (with apologies to Island), as well as one of the most beautiful. Michael, the larger of the two, is named after the archangel and has been a UNESCO World Heritage Site since 1996 in large part due to the Gaelic monastery that's resided there since as early as the 6th century. No people live there, but a variety of birds do: razorbills, puffins, gannets. Though you can't drive to the islands on the Ring route, you can catch sight of them off the Kerry coast and opt for a day trip ferry ride to encounter them up close.