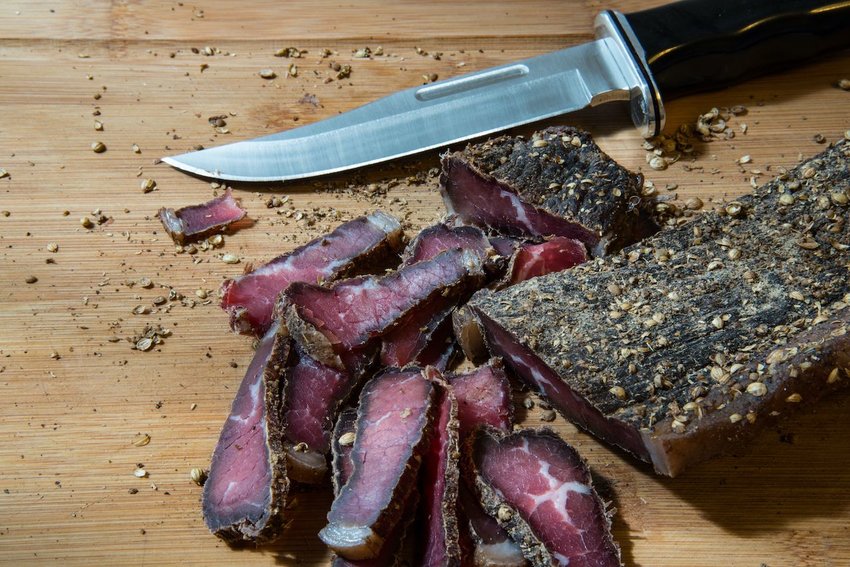 South African Biltong Is Like Beef Jerky, But Better

It's not the Ayoba Yo brand that we tried in this article, but you can currently save 15% on biltong from Kalahari on Amazon. Just clip the 15% coupon on the product pages below, and you'll see the discount taken automatically at checkout.

If you’re a fan of beef jerky, the next time you need to restock your pantry with on-the-go protein, you should consider the South African version: biltong.

At a quick glance, biltong and jerky look extremely similar, and yes, they’re both cured meat products. But a drastically different production process means that biltong is the healthier, and I would argue tastier, snack.

While jerky originated in North and South America, biltong was born in South Africa in a fusion of indigenous African and European meat drying techniques. In fact, biltong is actually a portmanteau of the dutch words “bil” (meat) and “tong” (strip), and it was the seafaring Dutch that introduced vinegar-based meat curing, as well as the antimicrobial properties of coriander oil, to the native South Africans.

While jerky is preserved by smoking sliced meat over a low temperature for several hours, biltong is cured by marinating cuts of beef in vinegar before rubbing it with salt, pepper, and African spices like cloves and coriander. The cuts of beef are then air dried for days or weeks at a time, and then thinly sliced at the end of the process.

This means that while jerky is, by definition, well done, biltong can be enjoyed rare (wet), well done (dry), or anywhere in between, depending on how it was prepared. And since it’s not subjected to heat during the air drying process, the final product is left with more preserved muscle fibers than jerky, meaning each serving will generally have more protein than the equivalent amount of jerky.

Since jerky gets so dry and smoky during the cooking process, most manufacturers add sauces and flavorings during the process, which often contain sugar, additional sodium, and preservatives. While biltong recipes vary, many contain zero sugar, zero carbs, zero nitrates, and less sodium than jerky.

None of this is to disparage jerky. I love jerky, and it’s a great snack that’ll keep you feeling full. But having tried biltong, I have to say, I think the South Africans got cured meat right.

If you want to give biltong a try at home, the easiest way to get started is to order a pack (or two or three) of Ayoba-Yo, which is easily purchased on Amazon in both spicy and traditional flavors.

To give you an idea of how healthy Ayoba-Yo’s biltong is, let’s compare a 28g serving to an equivalent 28g serving of Jack Link’s beef jerky, one of the most commonly available jerkies in the U.S.

Again, as snacks go, they’re both pretty healthy, and other brands of jerky will have different nutrition facts. But it’s clear that the air drying process of the South African snack results in a healthier final product, with fewer additives needed.

Health aside though, I also just think it tastes better. While most jerkies are flavored with sauces like teriyaki, or else are extremely salty or peppery, biltong tastes more like, well, beef. Other than the vinegar marinade, it’s essentially just dried, well seasoned, thinly sliced steak, and that’s exactly what it tastes like. It’s steak, not a meat candy snack.

It’s also much more tender than any jerky I’ve ever tried. While Ayoba-Yo isn’t exactly “wet” like some rarer biltongs can be, it’s less dry than the jerky you’re probably used to, and much easier to chew on.

Full disclosure: Biltong’s pretty new to me. I only became aware of it during our collective COVID-19 quarantine. But I have to say, simply eating it and learning about it has moved South Africa (and more specifically, a Cape Town culinary tour) higher up on my travel bucket list.