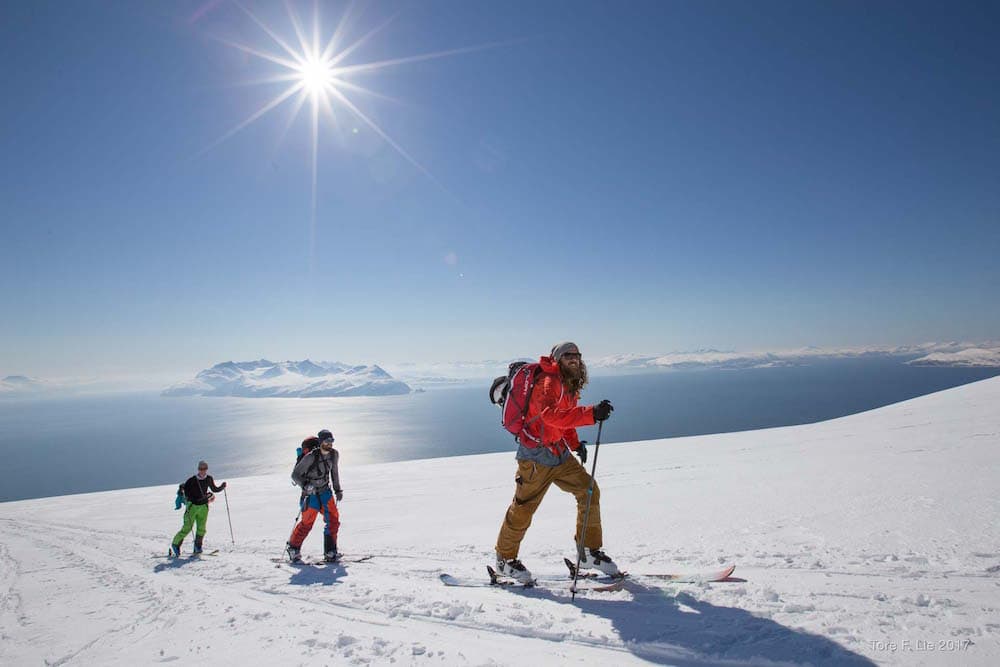 My journey north for “Sail to Ski” began with a phone call from my friend, to protect my inside source let’s call him “Red” for the purpose of this post. Everyone has a Red in their life: that one person who you can always count on to find the best vibes and the most ridiculously cool places before there are lines, selfie sticks, or trending hashtags. So when Red asked me if I wanted to go to Norway to ski I didn’t ask questions, I booked a ticket. 3 weeks later I was hustling through JFK with a Norwegian Air ticket stuffed between the pages of my beat up passport. My OOO auto responder was running a Dikembe Mutombo like defense against incoming emails and my only real concern in life was whether the 2 ambien I’d taken before security were going to kick in before I sat down in 19A...

Brandon (on the right) skiing with friends

For context, even though I’m technically based in New York, I still manage to ski more than most people would deem appropriate or rational, let alone necessary. But this trip was about to be my first extended ski touring experience. For those unfamiliar - ski touring refers to entirely human powered ascents. Over the years the ski industry has developed a number of mechanized means to skip the whole hiking thing: chairlifts, snowcats, helicopters, rope tows… all great inventions but none of which would be available for the next 7 days. The plan, which I had learned after already committing, was to use a sailboat to access remote mountains and hike more than 4,000 vertical feet each day before skiing back down to the ocean below. 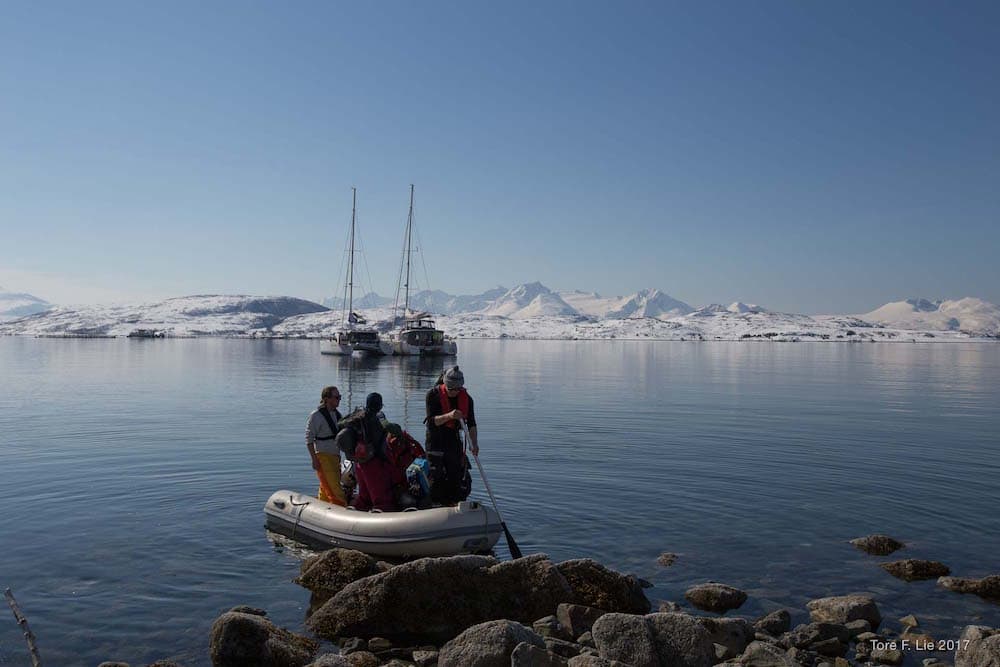 I touched down in Tromso, the northernmost city in the world with a population of 50,000 or more, at 11am local time. If you’ve seen a photo from Norway taken in the last 50 years that’s exactly what it looked like: cold, snow covered and nearly all the homes seemed to be painted red. I grabbed my bag, hailed a cab and headed for the dock… an odd destination for a ski trip.

By 5pm our entire group had arrived and all of our gear, food, and supplies for the week had been loaded into the 2 catamarans that would be our floating ski lodge. There were 16 of us in total, most of us newly introduced to one another but all connected by a single degree of separation: the aforementioned man, myth and legend, Red. We cast off the dock lines, switched our phones to airplane mode and set the course: north. We sailed through the night, a term I use very loosely because it never got dark. Imagine sailing on an empty sea surrounded by mountains the size of the Rockies all underneath a never ending sunset… that was my first night in Norway and my mind was officially blow. 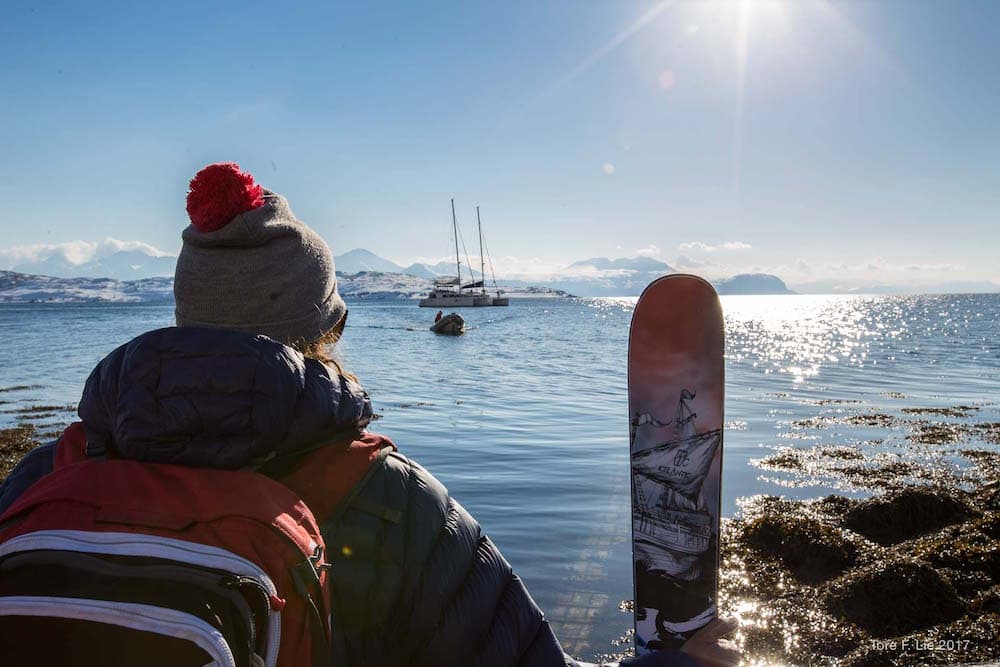 The week prior to departure I’d done my best to convince myself that my daily hikes up the stairs from the 6 train had adequately prepared me for the ski touring that lay ahead…. spoiler alert, they had not. The hike the first morning was real wake up call, literally and figuratively but I powered through and less than 36 hours removed from the mayhem that is Manhattan I found myself on the top of a Scandinavian mountain nearly 200 miles north of the Arctic Circle. Honestly, it felt so far from reality that I might as well have been standing on the surface of the moon. My legs hated me by the time our group reached the final ridge to the summit, but their complaints were muted by the 360 degree view. As my eyes panned the seemingly endless wilderness and then back down to the boats moored in the fjord 3,500 feet below the magnitude of what I was experiencing finally hit me. I took a deep breath of coolest, cleanest air my lungs had ever felt and in disbelief involuntarily blurted out, “Where the F*ck Am I.” And it only got better from there. 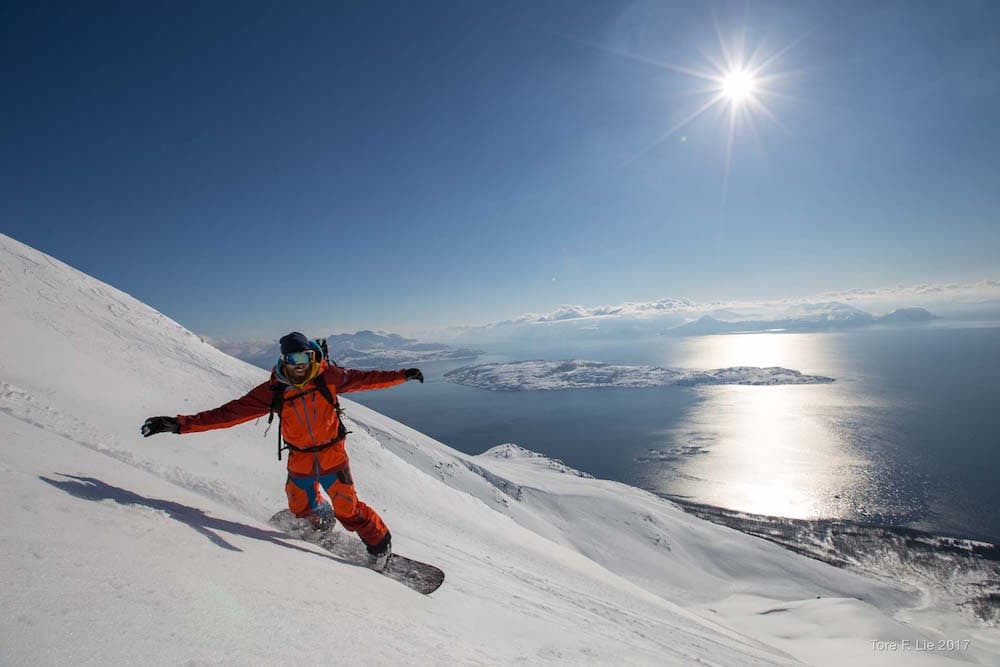 Fresh off an epic heli skiing trip in British Columbia my expectations for ski conditions in Norway were quite low, I was anticipating average conditions at best. My predictions could not have been more wrong. The splash of whiskey that our skipper, Anton, poured into the sea on the first evening clearly gained us favor with the Norse gods. Our entire week was filled with blue sky and untouched snow canvases of summit to sea perfection.

I had a GoPro with me but for most of the trip it remained in my backpack. At no time did I feel the need to go live on Instagram. This was not a story for Snapchat. Not a status update for Facebook. Not an experience to be summed up in 140 characters (or whatever Twitter’s limit is these days). Those precious moments were mine, and they were lived once and to their fullest extent. In a world obsessed with social sharing I decided to be selfish, and it was perfect. 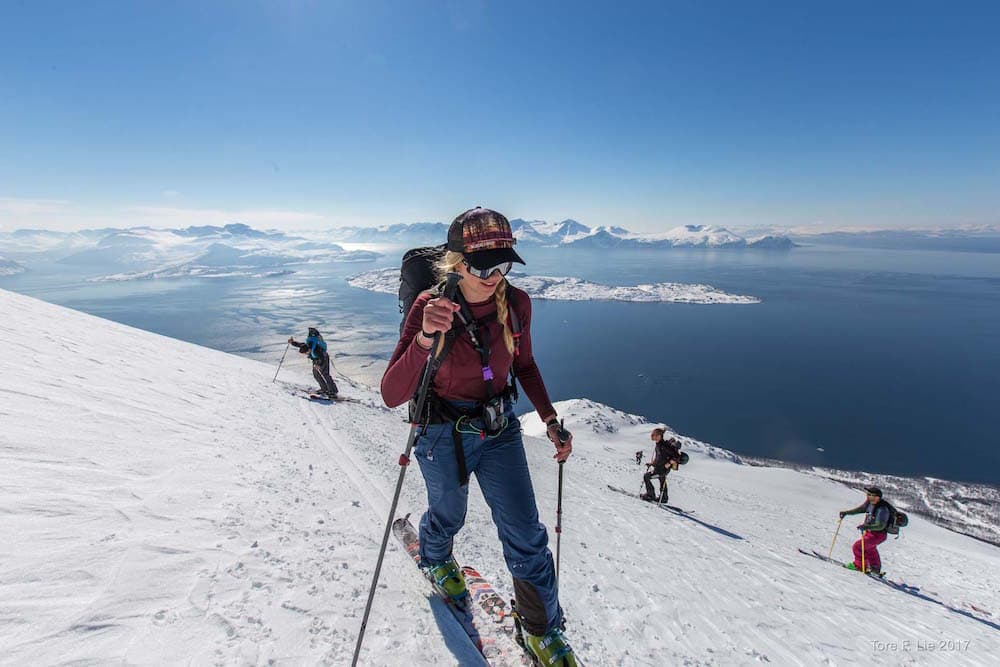 This may sound strange, and for those who haven’t lived it, probably hard to believe. But the best way I can describe this adventure is that it was an out of body experience. People I met when I boarded the boat felt like life-long friends within hours, I was 100% present, I felt connected to the group, to the world around me, to nature and to myself. It’s an overused statement and a bit cliche but I felt more alive than at any point I can remember. I bought a ticket to Norway in search of a few spring ski turns… but what I found was something unexpected and uniquely beautiful. Something that my words and photos will never fully convey. My only advice is to book the ticket and go find out for yourself.

About the author: Brandon Darnton | For more information on sail to ski Norway and other unique adventures feel free to reach out: brandon@heli.life