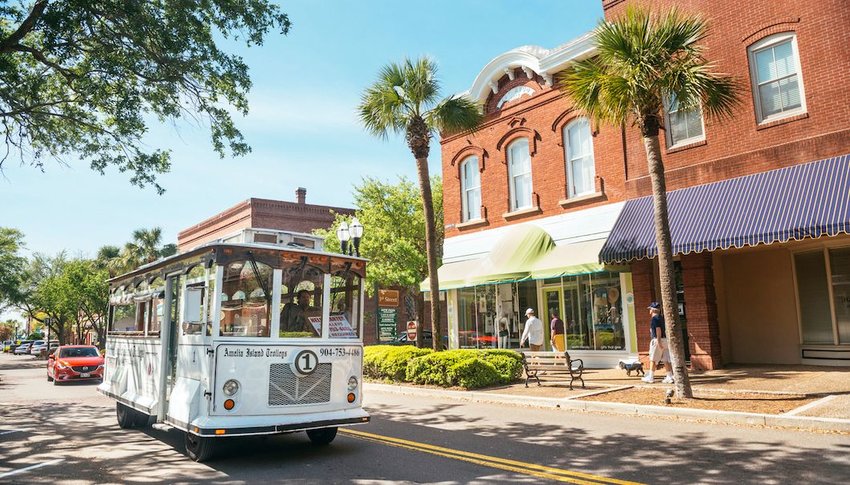 The Most Romantic Small Towns in the U.S.

Decadent chocolates, sparkling jewelry, and fresh red roses are Valentine’s Day classics, but nothing is more romantic than whisking your other half away for a dreamy getaway and spending some quality time together. Escape the stressors of daily life — the rambunctious kids and the demanding work schedule, and instead, indulge in candlelit dinners and relaxing B&B stays as you experience the small town charm of America’s most romantic destinations on a weekend escape.

Just 120 miles east of New York City on the easternmost tip of Long Island’s South Fork, the seaside village of Montauk offers a Hamptons-esque experience, but with a laid back vibe. Situated on over 5000 acres of pristine beaches and idyllic park grounds, Montauk invites its visitors to meander along the rugged cliffs of Montauk State Park, and go picnicking and bird-watching at Hither Hills State Park. But the one unmissable attraction is the Montauk Point Lighthouse, New York State’s oldest lighthouse, built in 1796. Climb its spiraling iron steps, conquering 137 of them to reach the top, and witness the sun dip mesmerizingly below the horizon of the Atlantic Ocean.

A sun-drenched Florida destination without the glitz and glamor of Miami, Amelia Island is a quaint barrier island town some 30 miles northeast of Jacksonville. Its charming downtown features quaint Victorian-era mansions and historic homes turned into B&Bs which you can check into for some old-timey romance. And Amelia Island’s 13 miles of pristine beaches lapped by the Atlantic Ocean make for dreamy walks or horseback rides along the shore. Stay at the Fairbanks House, an elegant villa dating back to 1885, where its rooms are outfitted with four-poster beds, claw-foot tubs and crackling fireplaces.

Spend quality time with your other half on St. Simons, the largest and most developed barrier island of Georgia’s Golden Isles. With its stretches of pretty beaches and marshes, it’s easy to feel at ease in this secluded coastal town. Feel the sand beneath your feet on a walk on East Beach, or rent bicycles and cruise along the St. Simons Island Trail System, a network of 30-plus miles of bike paths that hug the island’s coastline, lined by majestic live oaks. Head to the southern tip of St. Simons to witness the St. Simons Island Light, a lighthouse rebuilt in 1872 following its destruction in the American Civil War. For an unobstructed view of this historic landmark, stay in one of the 34 rooms at the charming St. Simon’s Inn.

Dating back to 1709, Beaufort is North Carolina’s third oldest town, which is apparent in its historic collection of stately Victorian mansions, Greek Revival, Queen Anne, and Gothic Revival structures, which now house quaint B&Bs, cool cafes, and al fresco dining establishments. Explore the town by bicycle, or get to know Beaufort’s intracoastal waterways on a private boat tour, but don’t miss a visit to Shackleford Banks, an undeveloped island along the 56-mile long Cape Lookout National Seashore for a look at the island’s wild horses.

Embodying a kind of chic attitude, Aspen is one of Colorado’s most glitzy ski resorts. Home to four ski slopes, this destination attracts the outdoorsy year round, as its vast network of rugged trails beckon intrepid hikers during the warmer months. Explore the natural beauty of the Colorado Rockies as you try your hand at skiing on the beginner-friendly Buttermilk, or expertly navigate the slopes of Snowmass. Then for the ultimate romantic dining experience, head to Cloud Nine Alpine Bistro, housed in an upscale European-style ski hut. Situated at a lofty 10700 feet midway up the Aspen Highlands, this establishment is only accessible on skis, snowboard, or snowcat, and you’ll swoon at a view of Colorado’s most famous twin peaks, the Maroon Bells, as you gorge on European-inspired fare.

Situated on San Juan Island off the coast of northwestern Washington, the vibrant arts community and natural beauty of Friday Harbor is easily accessible by ferry from Anacortes. With a modest population of just below 2500, Friday Harbor serves as the major commercial hub for the San Juan Islands. It’s a pedestrian-friendly destination, and you’re encouraged to explore on foot as you peruse the boutique shops, art galleries, and farm-to-table restaurants that are housed in historic wooden frame buildings, a tribute to Friday Harbor’s past as a fishing town. Spend peaceful afternoons hiking and spotting whales from the shoreline, or participate in a whale watching cruise that traverses the coastal waters of Washington for a chance to witness these marine mammals up close.

Perched on the northern tip of the 16-mile-long lake of the same name, the sleepy waterfront village of Skaneateles was founded in 1833. It’s the most quaint of the settlements in New York’s idyllic Finger Lakes region, preserving its history in the form of elegant Greek Revival and Victorian homes. Picnic beneath the gazebos of Clift Park, or indulge in an afternoon of wine tasting at Anyela’s Vineyards, then end the day with a meal at the local favorite Doug’s Fish Fry.