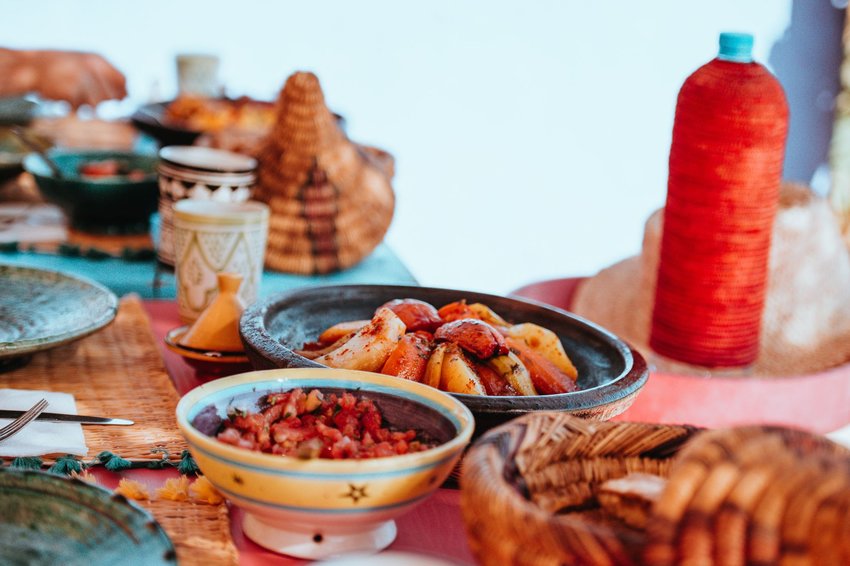 How To Cook the Perfect Moroccan Tagine In Your Own Kitchen

The sun shone, unseasonably warm, from a cloudless sky. The quiet hum of voices floated up to my balcony table on a gentle breeze. It was interrupted every now and then by the clatter of donkeys’ hooves or the squeal of wheels on the handcarts that are still a common sight in Fez’s mediaeval souk. The smell of roasted chicken, olives, and lemons as the waiter lifted the lid of the earthenware tagine brought me back to the present.

Three months on, if I close my eyes, I step back into that very different world imagine myself there again. In the meantime, I can prepare my own Moroccan tagine dish, and you can too as these distinctive cooking pots are easily available online.

The History of Tagine

The word tagine refers to both a clay dish, flat and round with a cone-shaped cover, and the food that’s prepared inside it. As with many long-standing traditions, it’s hard to pinpoint exactly when the tagine came to Morocco, but it’s likely to have been introduced by the country’s first settlers, the Berbers. In her Encyclopedia of Kitchen Cooking, Mary Ellen Snodgrass writes that tagine cooking was widespread across the Islamic Empire under Harun al-Rashid in the late 8th century and gets a mention in The Thousand and One Nights, written not long afterwards. Visit Morocco today and you’ll quickly come to appreciate its importance to the local cuisine.

The Role of the Pot

It’s no accident that a tagine pot has such a distinctive shape. Large or small, the dish has been designed to cook food in a particular way: steam rises from the hot food into the tall cone and condenses back so that the moisture can be reabsorbed. Cooked slowly (traditionally over charcoal), what you’re left with is food that’s succulent and juicy, not to mention rich in flavour.

Preparing To Cook Your Own Tagine Stew

If you intend to create your own tagine stew at home, first make sure that the tagine you purchase is suitable for cooking and not simply a decorative serving dish that’s shaped like a tagine. This terracotta tagine from Wayfair is the kind of thing I use in the kitchen. Before you use the tagine for the first time, you’ll need to season the dish. This involves soaking it in water, rubbing cooking oil over the clay and baking it in the oven (without food) for a couple of hours.

Once you’ve done so, heat your charcoal; large chunks are best. In the kitchen, that’s not always practical, of course, so instead you could aim for a gentle heat on your stovetop. If you can, place a metal heat diffuser between the source of the heat and the base of your tagine. This helps the meat to cook more evenly and minimises the risk of an earthenware tagine cracking. Easier still, cook your tagine in the oven on a very low setting.

A Diverse Set of Ingredients

Though tagines can be vegetarian, it’s more typical to use meat as a base. Lamb is the most common in Morocco, or mutton, but you can also use chicken, beef or even fish. It’s not necessary to choose the best cuts as this gentle cooking method will tenderise the meat.

Flavor is added in the form of spices: saffron, cumin, turmeric, coriander, ginger and cinnamon all combine to add depth and richness. Four base combinations exist; the most popular, giving the food a yellow hue, is mqualli, comprising olive oil, turmeric, ginger and saffron. But you’ll also find tagines with m’hammer, using butter, cumin and paprika, mchermel, with chermoula (a paste made from garlic, cumin, coriander, oil and lemon juice) and also one that’s focused on tomato, paprika and cumin.

A variety of other ingredients are used to bulk up the stew and develop the taste. These can include potatoes, onions, carrots, olives and preserved lemons. Dried fruit such as sultanas, prunes, or dates ensure the stew is sweet. Nuts such as flaked almonds are another common addition. Just as in Morocco you’ll find a long and varied menu in any café or restaurant, so too can you alter the ingredients you use at home. It’s a dish to customize and to experiment with.

When it’s done, remove from the heat and allow the tagine to cool slightly. Serve communally with hunks of fresh, crusty bread or a pot of fluffy couscous to soak up all that delicious sauce. You can use this time at home to perfect your recipe, so that when social distancing eases, you can invite your friends over for a delicious shared experience.