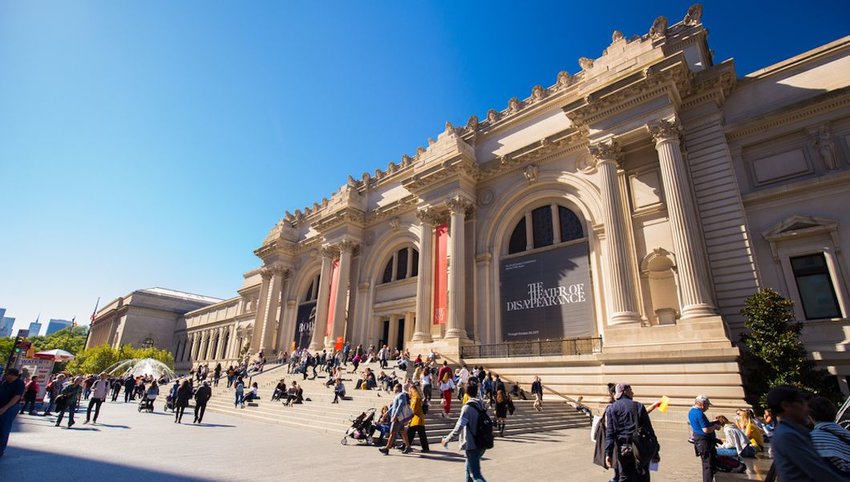 Insider's Guide to the Metropolitan Museum of Art

While art museums of all styles and sizes exist in every major city across the world, there is simply none quite like the Metropolitan Museum of Art.  To enter the Met, perched on the edge of Central Park on Manhattan’s Upper East Side, is to be transported into another world, where beauty abounds and thought-provoking imagery hangs in every corner.

The Met’s Past and Present

Since its founding in 1870, the Met has acted as an oasis for busy New Yorkers and visitors to the city alike. If you visit the museum today you’ll find it has expanded to almost 20 times its original size, standing at 2.2 million square feet with about two million works in its permanent collection. Its popularity isn’t waning either:in 2018, the Met reported a record year with 7.3 million visitors between its three locations. The Met Breuer, nearby at 75th Street and Madison Avenue, and The Met Cloisters, in Fort Tryon Park at the north end of Manhattan, are undoubtedly worth visiting as well, but the museum at Fifth Avenue is the trio’s crown jewel.

While any visit to the museum is special, going to the Met for the first time is a rite of passage. The main entrance leads visitors up its iconic front steps, depositing them in the massive Grand Hall. If it’s not your first time here, or you’re just looking to skip the long ticket lines, you’re in luck: The accessible entrance, one block south at Fifth Avenue and 81st Street, provides just that. For New York State residents, as well as students in New Jersey and Connecticut, admission to the museum is pay as you wish. If you’re not from the tristate area, tickets cost $25 for adults, $17 for seniors, $12 for students, and are free for children under the age of 12. The admission price includes access to all three locations for three consecutive days.

What To See At the Met

Once you’ve got your sticker (the museum switched to these from metal pins in 2013 as they cost less to produce) give yourself a moment to take in the Grand Hall. Opened in 1902, it solidified the Met’s place as a distinguished home of the arts.

After looking around this entry space, head to the north end of the museum, where you’ll find the Egyptian wing. While there’s no wrong route to take in the museum, this path brings you right into the heart of one of the institution’s most remarkable—and expansive—exhibits. Lined with sarcophagi and intricate artifacts from ancient Egypt, the exhibit’s path opens up to a grand reveal: The Temple of Dendur, a reconstructed temple originally commissioned by Caesar Augustus of Rome. Standing in front of floor-to-ceiling windows, the 15 B.C. temple is even more captivating in person than it appears in the many movies featuring it (Of late you may remember Sarah Paulson pulling a necklace out of the pond in front of the temple during Ocean’s 8). It was gifted to the United States by Egypt in 1967.

Just a few steps around the corner and you’ll be magically transported back to America. Side note for anyone looking to optimize their time: you’ll find the bathroom with the consistently shortest line right before you turn the corner. The option within the Egpytian exhibit is generally packed in comparison.

Once you’ve entered the atrium of the American wing, take in what may be the nicest version of the country out there.The space is dotted with stained glass creations, gold and marble statues, and an entirely glass roof that allows light in. Take note of the two street lights positioned in the middle of the room which used to stand out in front of the museum.

After making your way through the collections (be sure to check out the 25 furnished period rooms, ranging from the grand rococo pre-Revolutionary Van Rensselaer hall dating from 1769 to a Frank Lloyd Wright living room of 1915) make your way to the second floor. On the upper floor you’ll discover room upon room filled with masterful European paintings created between the 13th and 19th centuries. As you walk around, gawk at paintings such as Bridge over a Pond of Water Lilies by Claude Monet and Head of a Woman by Pablo Picasso, hanging alongside less well-known, but equally remarkable works such as The Building of Westminster Bridge by Samuel Scott and The Music Room by Mihály Munkácsy.

The second floor is also home to the photograph and musical instrument exhibitions at the Met, a great way to explore different mediums of art. Make sure to check out “The Francesca” Violin by Antonio Stradivari, one of about 600 in existence created by the string instrument crafter along with the 19th century Native American Raven rattle. Exhibitions within The Joyce and Robert Menschel Hall for Modern Photography change every six months, often pulling from the permanent collection.

Speaking of, no visit to the Met would be complete without diving into another artform famously showcased there: Fashion. As fans of the Met Gala, an exclusive event hosted on the first Monday of May, may know, the Costume Institute’s rotating annual exhibition is at the heart of the extraordinary celeb-packed party. Found via a staircase off the Egyptian wing, the space showcases two remarkable exhibits a year focused on the impact of fashion in the world. Past exhibits have included “Alexander McQueen: Savage Beauty,” “China: Through the Looking Glass,” and “Manus x Machina: Fashion in an Age of Technology.” Under the guidance of Andrew Bolton, the Costume Institute’s Head Curator, the  rooms transform into a thought-provoking look at fashion and the many ways it has been interpreted.

Other permanent exhibits of note include the Islamic Art section, which features intricate mosaics and magnificent rugs, and the rooms of Greek and Roman Art, found on the south side of the Grand Hall, featuring sculptures so detailed it’s almost unbelievable that they were molded by human hands. Rotating exhibitions will be advertised in the Grand Hall, as well as the museum’s paper guides. If there’s an exhibit that specifically piques your interest or the mere size of the museum feels overwhelming, opt to sign up for a tour—included in your admission price. This is also a great way to manage your time at the museum and ensure you see the exhibits that are of most interest to you. While an infinite amount of time could be spent at the Met, determining your must-see collections before visiting will ensure you see the key points before getting exhausted (or the museum closes for the night!). Keep in mind that most wings of the museum will take about 45 minutes to an hour to see properly.

Where To Eat At The Met

If looking at beautiful works of art makes you snacky, head to one of the cafes scattered about the building. The American Wing cafe arguably has the best view as it looks out at the atrium, though the 4th floor dining room is a treat if you’re looking to have a proper meal. You can also check out The Balcony Lounge on the second floor or the Petrie Court cafe on the first for more treats.

As for outdoor cafes, across from the Fabergé eggs (yes, the Met has a few of these jewelled creations on display) is the only elevator that brings you up to the secret thrill of the 5th floor: the rooftop terrace. If you have trouble finding this sole elevator (as people who’ve been to the Met countless times still struggle to) just ask a staff member. Open between May and late fall, the rooftop is undoubtedly worth the search. Free to all ticket holders, it features a rotating installation, a small cafe with drinks and bites, and—most notably—spectacular views of Central Park and the Manhattan skyline.