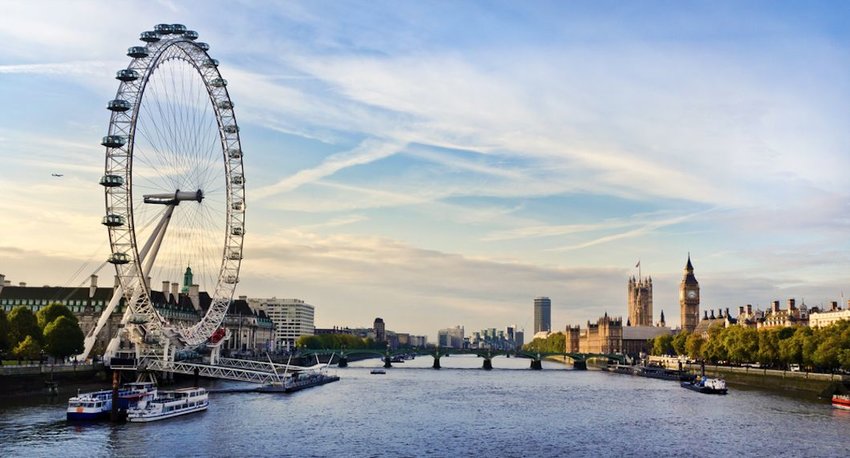 How to Pack a Week Into a Weekend in London

London’s the kind of place you never tire of. Two thousand years of history coupled with a forward-thinking population are a killer combination when it comes to European city vacations. The city is cosmopolitan, constantly changing, and above all, just cool. With just three days to spend in London, you’ll need to be smart with your geography, but it’s still enough time to get a flavor of what the U.K.'s capital has to offer if you plan well. If you can spare a weekend, here’s how to pack a week’s worth of sightseeing into half the time.

Grab a selfie with Eros in Piccadilly Circus before strolling along to the Queen’s grocer, Fortnum and Mason, to look out for its distinctive eau de Nil façade. Continue past the famous Ritz hotel and wander through leafy Green Park, the smallest of the capital’s eight Royal Parks, but one of the prettiest. If you’re on an early flight and you manage to reach Buckingham Palace by 11, you might just catch the Changing of the Guard ceremony. Be sure to check the day’s schedule first to avoid hanging around. In summer, the palace is open to visitors; if the flag is flying, the Queen’s in residence.

From the Palace, walk along the mall and exit through the arch into Trafalgar Square. You might be content with a photo of Nelson’s Column, but art lovers will want to pop into the National Gallery. Grab a bite to eat at Café in the Crypt, whose profits support the work of St. Martin-in-the-Fields church.

From there, hop on a Number 15 bus and have a look at the Royal Courts of Justice, Fleet Street, and St. Paul’s Cathedral from your top deck seat. Sit on the left headed east for the best views and grab the front seat if you can. Alight at Tower Hill and take a tour of the Tower of London with a Beefeater to see the famous ravens. Legend has it that if the ravens leave, England is doomed.

Walk across Tower Bridge and take a trip up to the viewing platforms at The Shard, London’s tallest building. On a clear day you can see for 40 miles into the distance. Toast the world class view with a glass of fizz and then descend to street level to eat at atmospheric Borough Market just around the corner. Try Wright Brothers, which serves up a delicious seafood menu including local favorites like oysters, whitebait, and crab. The night’s still young, so round off your first day trying some traditional ale in one of the market’s pubs. The Market Porter doubled as the Third Hand Book Emporium in the movie “Harry Potter and the Prisoner of Azkaban” and has bucket loads of charm.

Start in Notting Hill on the history trail. George Orwell’s house is at 22 Pembridge Road. The posh mansions of this upscale neighborhood contrast with the terraced cottages of Pottery Lane. Once nicknamed “Cut Throat Lane," the street had one of the worst reputations in the city and led into a slum named the Potteries and Piggeries. On Walmer Road, you’ll find the only surviving brick kiln in the area. Across in Lansdowne Crescent you’ll find the Samarkand Hotel at Number 22, where Jimi Hendrix died. Don’t leave this part of town without browsing for antiques in the famous Portobello Market, the world’s largest antique market. Saturday’s the best day for a rummage.

If you’ve worked up an appetite, there’s plenty of choice for brunch. Lowry & Baker’s menu has both healthy and indulgent choices, while Bluebelles of Portobello is a popular alternative.

Stroll south to the Diana Memorial Garden at Kensington Gardens. The fountain was built from 545 pieces of Cornish granite.  Water flows in cascades and swirls until it reaches a calm pool at the bottom, symbolizing the popular Royal’s often turbulent life. Walk past Hyde Park’s Serpentine Lake and hire a rowboat for an hour if it’s warm enough. Exit the park onto Brompton Road to pick up a souvenir or two in Harrods, London’s most iconic department store.

Spend the rest of the afternoon in nearby South Kensington, home to some of London’s best museums. Depending on your interests you could visit the Science Museum, Natural History Museum, or V&A museum, all of which are worth your time. When it’s time for dinner, there are plenty of restaurants lining nearby Thurloe Place including Japanese, Italian, and Thai.

Round off the day with tickets to a concert at the Royal Albert Hall, opened by Queen Victoria in 1871 in memory of her late husband. Or, if you prefer plays to concerts, explore London's theater district and get tickets to a West End show. Agatha Christie’s "The Mousetrap" opened in 1952, making it the longest running play, but for more spectacle, try London’s longest running show instead. The iconic musical "Les Misérables" has shifted to the Gielgud on Shaftesbury Avenue while its original home, the Queen’s Theatre, is refurbished. After the curtain comes up, stroll up to Covent Garden for a nightcap or head to Ronnie Scott’s for some mellow jazz you can enjoy until midnight.

Start at the Houses of Parliament. Although Elizabeth Tower, which houses Big Ben, is partially under wraps for an extensive renovation, you can still see one of the famous clock faces. Walk across Westminster Bridge and take a morning ride on the London Eye. Erected for the city’s Millennium celebrations, the world's largest ferris wheel was only supposed to be temporary, but the attraction's still as popular as ever.

Next up, don a lifejacket and jump onboard a super fast RIB for one of the most exhilarating excursions in the capital. Likened to a rollercoaster on the water, these high-speed boats will let you dodge the spray to take in views of the Tower of London, the O2 at Greenwich, and the towering offices of Docklands. Alight at Greenwich if you can and if not, catch a Thames Clipper back to Greenwich Pier.

Enjoy a traditional Sunday roast at a local pub such as the nautically-themed The Gipsy Moth or typical East End pie and mash at Goddards, established in 1890. Board the Cutty Sark and learn about the tea trade on the world’s sole surviving clipper. Work off lunch as you climb the hill to the Greenwich Observatory, where you can find out about longitude and the competition that led to the establishment of Greenwich Mean Time. If you still have time, duck across to West India Quay to visit the Museum of London Docklands, housed in an old sugar warehouse.

Accommodations and Getting Around

There are almost 1,500 hotels in London that cater to all tastes and budgets. London sprawls over a huge area, so location should drive your choice rather than high-end facilities or brand name. If you’re only in town for a weekend, saving money on a less central location isn’t a smart move. You should also note that it’s much quicker to get around if you stay north of the river rather than south. Each neighborhood has a different vibe, so pick the one that best suits your style.

West is often best. Try Notting Hill’s elegant The Laslett or splash out on somewhere central like Ham Yard Hotel in Soho. If you’re keen to score a wow factor view, the Trafalgar St. James, part of Hilton’s Curio Collection, overlooks Trafalgar Square. Budget conscious travelers would do well to focus on East London, though you’ll pay more to stay in trendy Shoreditch or Hoxton. A good compromise is the City. Quiet outside business hours, you might score a discounted room, but the tradeoff is that coffee shops, bars, and restaurants in the immediate vicinity are likely to be closed or lacking in atmosphere.

There are six London airports, all served by train connections of between 15 minutes and an hour. The biggest is Heathrow. The Heathrow Express takes 15 minutes to reach Paddington in west London, while the Tube (subway)’s cheaper but slower. Unless you’re keen to tick off a black cab ride on your London bucket list, don’t choose to be driven into town as the traffic’s most people’s idea of hell. Uber, if it manages to retain its license, isn't much faster. Once you reach central London, you won’t need a car at all and honestly, you’ll become so frustrated with finding a parking space, you’ll probably leave it in an expensive garage at the first opportunity. Instead, make the most of the excellent public transport network. Use TfL’s journey planner to work out the best routes. For the cheapest fares, use a contactless credit or debit card or mobile payment such as Apple Pay.