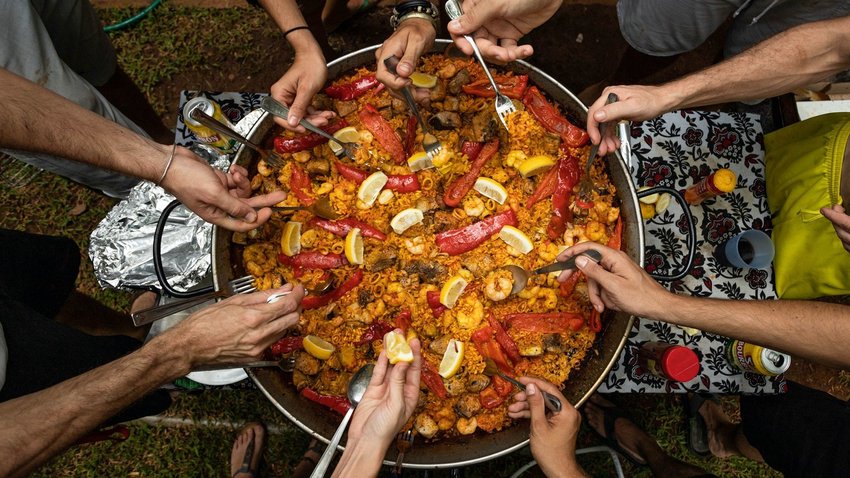 Reconnect With Friends and Family Around a Homemade Paella

The next time you want to have a pizza night with friends or family at home, consider making it a paella night instead. Cooking the iconic Spanish rice dish is a communal experience, and has been for hundreds of years. It’s also a delicacy that’s easy to customize and tweak based on dietary restrictions or personal taste; I’ve made dozens over the years, and don’t think I’ve used the same combination of ingredients twice.

While paella can now come in many forms and encompass any number of different ingredient combinations, there’s little doubt that the dish originated around the Spanish city of Valencia. The region was the largest rice producer in Spain after the Moors introduced the grain in the early 700s AD, and that abundance provided the raw materials for this infinitely customizable meal.

Today, paella is probably one of the more expensive dishes on the menu at your favorite tapas restaurant, but it actually comes from humble beginnings. It’s believed that Valencian farm laborers would cook the dish with rice plus whatever vegetables and meats they could get their hands on over an open flame while working in the fields, and enjoy the meal communally throughout the day.

That spirit of experimentation is very much alive in the dish today, and outside of rice and a few vegetables, recipes vary dramatically, and can incorporate a wide variety of disparate flavors depending on your taste.

Perhaps the most defining feature of paella is the pan that it’s cooked in. Always round, flat, and shallow, and often large (some are several feet in diameter), they’re designed both to cook a large quantity of ingredients, and also to maximize surface contact with the rice, giving the finished dish a delicious crunch.

The cast iron skillet you already own could get the job done for a small paella--maybe four servings at most--but if you’re hosting a larger group or just want to have leftovers, it’s worth investing in a larger, shallower pan.

Lodge, the brand that almost certainly built that aforementioned cast iron skillet in your kitchen, happens to make a 15” carbon steel pan that’s perfect for paella, and big enough for a 6-8 servings.

The Lodge pan does a pretty good job of distributing heat on a traditional stove, even if a traditional stove burner will seem pretty small underneath its expansive bottom face. I’ve also had success resting it across two separate burners, which can heat up the pan more quickly, but that will depend on the configuration and spacing of your stove.

But when I learned to make paella years ago during a cooking class in Barcelona (which I can’t recommend highly enough, if you get the chance), the instructor used a specialized, gas-fired paella burner that evenly distributed heat across a massive pan. It’s definitely overkill if you’re cooking for the family, but would become increasingly necessary if you were preparing a paella for a larger group.

While the specific ingredients can vary (and vary a lot) according to your taste, almost all paellas involve these four steps.

I’ve cooked paellas featuring shrimp, scallops, octopus, crawfish, clams, calamari, pork chop, sausage, chicken, and any number of combinations thereof. In most cases, these ingredients will be cooked along with the rice at the end of the process, but you should start by browning them with oil, salt, and pepper in the paella pan, before moving them aside to a separate dish until it’s time to add them back in. Not only will a little browning make the ingredients themselves more tasty, but the browning process will also leave behind some juices in the pan to enhance the flavor of the sofrito.

Cooking the sofrito is usually the longest part of the process, and for me at least, a great time to sip on some spanish tempranillo and enlist the help of friends and family to chop up some vegetables. It generally involves cooking diced onion until it’s soft and caramelized, plus minced garlic added later, but I also add fresh diced tomatoes and green bell pepper to the mix, along with plenty of salt, pepper, and olive oil. The sofrito is where the paella actually gets most of its flavor, and the longer you cook it (within reason; don’t burn it), the better it will taste. Don’t rush things.

Once the sofrito is soft and almost paste-like, you’ll want to stir in the rice to toast in the pan for a couple of minutes to let the grains absorb the flavors from the sofrito. Traditionally, paella is made with bomba rice, but arborio works well too, and is usually easier to find. These short grains absorb a lot of moisture (and flavor), and stay separate after they’re cooked, without turning creamy like longer grains might. Aim for about a ¼ cup of dry rice per serving.

And finally, you’ll want to stir in your stock--traditionally seafood stock, but chicken or vegetable could work as well--at a 2:1 ratio in relation to your rice. I usually use 2 cups of dry rice, which means a 32 ounce carton of seafood stock is the perfect amount. If you want to be fancy and make homemade stock, more power to you, just know that the more flavorful, the better. This is also where most recipes call for a healthy pinch of saffron, which gives the dish its distinct yellow hue, but it’s also perfectly enjoyable without it if you don’t have the expensive spice handy.

Finally, add most of the meats you set aside back into the dish, stirring in things like sausage and pork, while setting faster-cooking seafood like clams and shrimp on top to steam. And then…just leave it alone. You’ll want to stir, but avoid the temptation; the goal here is to get a good crust on the bottom of the pan.

Once the liquid is absorbed and the bottom layer of rice is crispy, pop a bottle of wine, and dig in! Traditionally, everyone eats directly from the pan, but that’s where I draw the line on respecting the dish’s heritage; just give everyone their own plate, and enjoy.