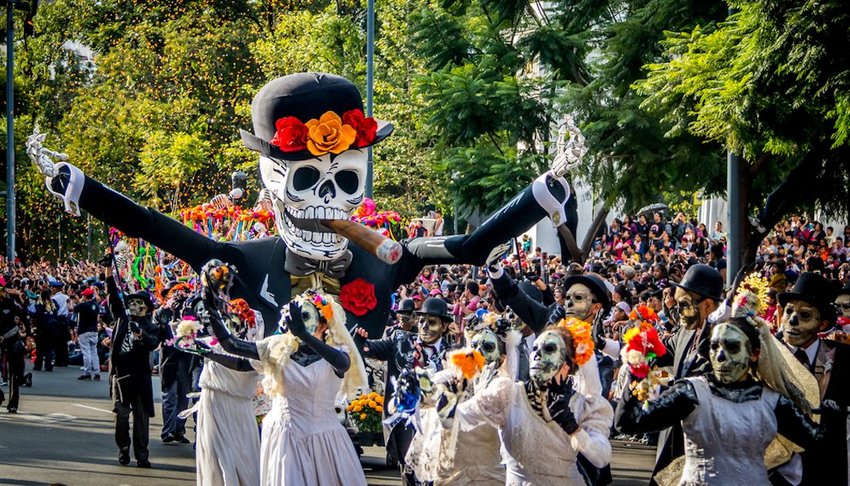 How to Celebrate Day of the Dead in Mexico

Día de Muertos, or the Day of the Dead, is one of Mexico’s best known and certainly most vibrant festivals. Its popularity means that the occasion is marked around the world, but with that spread comes to confusion and misunderstandings regarding the celebration's true significance. There’s nothing quite like experiencing it on home turf, so here's what you need to know if you’re planning to celebrate Day of the Dead in Mexico.

When is it celebrated?

The holiday is officially celebrated over three days, though timing your visit so that you can participate in the preparations is as rewarding as the main event. The three days can be summarized like this: very late on October 31st, or All Hallows' Eve, Mexicans believe the gates of heaven open. Throughout the 24-hour period stretching across All Saints Day on November 1st, the spirits of dead children are enticed to visit lavishly-decorated ofrendas (altars). On All Souls Day, November 2nd, it’s the turn of the ghosts of deceased adult ancestors. Again the ofrendas play a big part, and they are typically laden with old photographs of family members, flowers and the deceased's favorite food and drink. The whole family heads to the cemetery where they place offerings on the tombs of their much-missed loved ones.

There’s a party atmosphere with street parades and other festivities, as Mexicans believe that Día de Muertos is a day of happiness and celebration rather than a time of sadness. People gather to pray for their relatives, but also to play music, feast on delicious food, and toast the deceased with Mezcal or beer. Children munch on sugar skulls that are a nod to the Aztec goddess of death, Mictēcacihuātl, and more recently the calavera (skeleton) introduced by the political cartoonist José Guadalupe Posada in the early 1900s. La Catrina, as his creation is called, wears a feather boa and fancy hat – but Posada’s cartoon reminds everyone that no matter how wealthy you were, you still wind up in the same place in the end.

Where are the best Day of the Dead celebrations held?

Traditionally, Día de Muertos is associated with south and central Mexico, so ensure you travel south of the Tropic of Cancer for the most authentic celebrations. Visitors are welcome, so long as they remain respectful, particularly at grave sites. You should expect to be invited to participate rather than simply spectate.

Purists will make their way to Janitzio Island in Lake Pátzcuaro, Michoacán. The indigenous Purépecha community hunt for ducks on the lake to prepare a special feast to offer the dead. At sunset, fishermen load their canoes with lighted candles and perform a butterfly net dance which will leave you transfixed. At midnight the women and children make their way to the cemetery for an all-night vigil; the cemetery bell tolls all night to call the souls of the deceased.

One of the best cities to experience Day of the Dead is Oaxaca. A big parade is held in the city center to kick off proceedings. On the edge of the city, at the Xoxocotlán’s old and new cemeteries, families gather to dress graves with stems of red gladioli and buckets of orange cempasuchil. Parades known as comparsas take place across the city and in surrounding villages. The fancy dress costumes worn in the Muerteada San Agustín Etla are as outlandish as they are impressive.

Mexico City’s fantastic parade is a relatively new event, precipitated by the 2015 Bond film Spectre, whose opening scene depicted the festivities. The Zócalo is resplendent with stalls and ofrendas, as well as traditional dancing. Elsewhere in the city, the canals of Xochimilco make an atmospheric setting for the celebrations and you’ll have the chance to taste pulque, a fermented drink made from the agave plant. The strong indigenous roots that characterize the San Andrés Mixquic neighborhood make this a good choice too.

How can I join in?

Brightly-colored cempasuchil, Mexican marigolds, adorn graves and altars in the run up to the Day of the Dead festivities. You’ll see them all over the country, in markets, florists, and hawked on street corners. The choice of flower is no accident. Orange signifies the sun, and in Aztec mythology, that’s what guides spirits to the underworld. It’s also thought that the ancestors return to their families and the heady scent of these orange blooms helps guide them.

Pan de muerto is a traditional bread that is baked for Day of the Dead. This sweet, soft bread is shaped like a bun and is often embellished with thin bone designs. You might also see a teardrop; this symbolizes tears from the Aztec goddess Chīmalmā. Designs and recipes vary from region to region; for instance, in San Andrés Mixquic they’re sprinkled with sesame seeds.

Some guesthouses will invite visitors to join in the preparation of their ofrenda. Flower crosses, a path made from cempasuchil flower petals and of course the altar itself come together in the days leading up to Day of the Dead. Some may suggest you can bring your own photographs and offerings to place on the finished ofrenda in memory of your own departed loved ones.

At first, you might feel a little uncomfortable at the thought of intruding on families at what might be considered a private occasion. In fact, the reverse is true and so long as you behave in a respectful manner, you’ll be made to feel welcome. Walking through a cemetery of candle-lit graves is a moving experience and one that you’ll feel privileged to be a part of.

It wouldn’t be Mexico without a party and the many parades that take place are a riot of color. Dress up too if you wish, dance and enjoy yourself as you join in the fun. After all, don’t your own ancestors deserve to feel special?