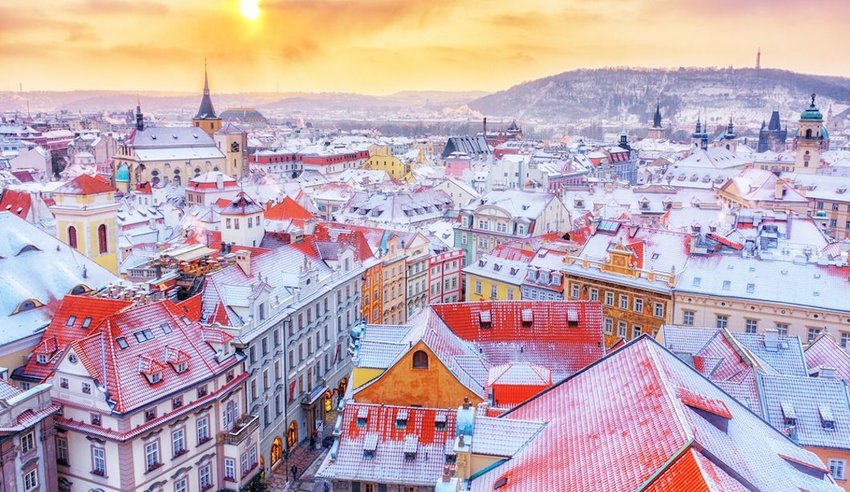 Gorgeous Photos of Your Favorite Cities Covered in Snow

It's that deliciously frigid time of year in the Northern Hemisphere when gray clouds gather and let loose the first frosty flakes of the season. Before the piles of snow turn to grey mush and become an inconvenient obstacle as you try to trek across town, let's take a second to appreciate the wonder and magic a good snowfall can bring. Whether you live in a cold destination or not, enjoy these pictures of your favorite cities draped in snow.

It's hard to improve on a classic like Paris, but a dusting of snow over the banks of the Seine turn this romantic city into an even dreamier sight. Its off-season winter is one of the best times to visit for cheap accommodations, restaurants to yourself, and views like these.

It's been over two hundred years since the great frost fairs on the River Thames, when Londoners would bundle up and skate across the frozen river. But you can still enjoy the icy river banks and watch the snow settle on the London's great landmarks.

The colorful rooftops of Prague are a charming sight on the best of days, but dusted with snow they appear like gingerbread houses. Winter visitors to Prague stroll the stalls of its Christmas market, and take refuge in its warm cafes.

Copenhagen's famously bike-friendly streets become a little harder to navigate in the winter when snow makes the sidewalks sleek. But if you can brave the cold, you'll be treated to the city's Christmas markets and its candy-colored row houses glistening with ice over the canal.

Istanbul might not be the first city you think of that sees snow, but Turkey's capital sees its fair share of wintry weather. Blankets of snow transform iconic sites like Hagia Sophia into magical scenes, and the hot summer becomes just a memory.

You'll only have a few hours of light to see snowy St. Petersburg in the winter, but it's worth getting out and about to see the glistening city in all its glory. Whether you head for the frigid river banks, or find warmth in the famed Hermitage museum, you'll find plenty to enjoy during this season.

There are few things more magical than a winter holiday in New York, as blankets of snow cover the city. The snow doesn't stay pristine for long in most city corners, but if you seek out parts of Central Park or less-trodden areas, you'll enjoy a sight straight out of a holiday movie.

Whether you've been lucky enough to traverse one of the sections of The Great Wall of China, the destination transforms in winter, when snow covers the slick steps of the wall which snakes along white mountains.