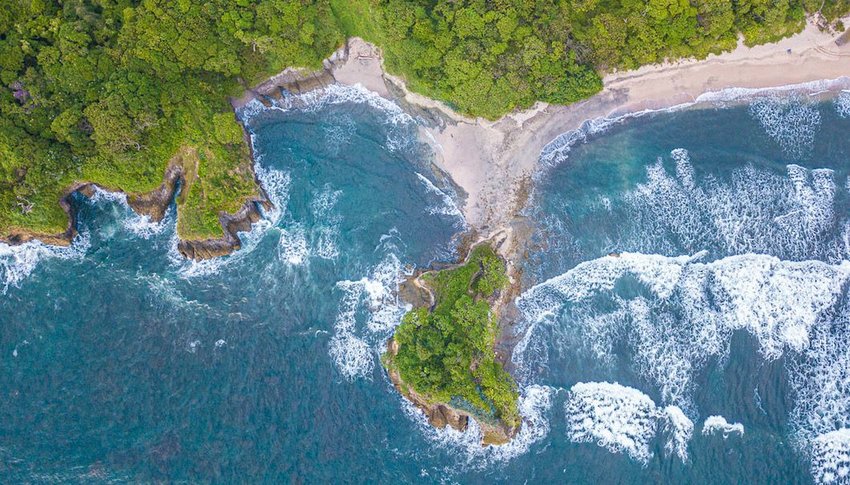 Facing Fear and Learning to Surf in Costa Rica

On a dream trip, I grapple with a near-broken foot and mental barriers to catch my first thrilling wave — with a little help.

I leisurely step off the edge of my nine-foot surfboard like a dance. I’m near the shoreline, so I lie back as my feet pierce the crystal-clear surface of the royal Pacific. My motions and mindset are starting to find a rhythm in this foreign element. It’s my third surf session since I arrived two days ago, and I’ve been catching rolling whitewater for the past couple of hours.

I’m in Nosara, Costa Rica, for a 10-day vacation full of firsts. It’s my boyfriend Eric’s inaugural venture beyond the United States and our first trip together. We’re here to learn how to surf. We’ve already taken two lessons with Rolando López, a Nosara Surf Shop coach also known as Rolo, who grew up here and has been an instructor for nearly two decades. Rather than surf, he's been standing in the ocean to help stabilize our boards — a technique that allows us more practice runs. Thanks in part to his positive reinforcement and feedback, we've quickly progressed, but I know I have so much more to learn. As a southwestern Coloradan raised in the Rocky Mountains, I’m an outdoorsy person yet viscerally afraid of the ocean’s raw power. I’m eager to change my relationship with its turbulent waters.

Nosara: One of the Raddest Surf Towns in the World

To curb our budgets and work schedules, Eric and I took a red-eye flight from Denver to Florida before jetting to Costa Rica’s capital, San José. From there, we steered our SUV rental six hours west through city traffic, rural highways, and ferociously potholed jungle roads to reach this hamlet of Playa Guiones — a pristine, four-mile, white crescent beach glorified by consistent year-round waves. We’re on the edge of Guanacaste Province in the Nicoya Peninsula, where the indigenous Chorotega ruled before the Spanish conquistadors arrived in 1523. Centuries later in the 1820s, the locals voted to secede from Nicaragua and rejoin Costa Rica. Multigenerational Ticos (Costa Ricans) still hold this community. Over the past two decades, though, the area has ballooned in popularity among international travelers, expatriates, and sustainable chefs. This acclaim was partially fueled by The Endless Summer 2, a 1994 film with surf scenes at Ollie’s Point and Witch’s Rock.

Guiones is revered for reliable swells. Experts say this region holds more surfable days than anywhere else on the planet, and the waves rarely tower above a few feet, according to National Geographic. It’s no wonder Travel + Leisure named Nosara one of the coolest surf towns in the world. A sand shelf — the one Rolo stood on as he taught us — persists near the water’s surface and reaches well beyond the beach. Novice surfers can easily access the frothy whitewater. The waves are mixed in size, but aren't too extreme.

The surrounding wilderness is pristine. Along the coast, trees tower with abundant umbrella-shaped leaves. Hordes of howler monkeys swing on the branches above spotted geckos and white-nosed coati, who fuel on scraps from the coconut water and fruit stand. All around us, the wildlife and forest show little-to-no human impact, thanks to the Nosara Protected Zone, which was established in 1994.

Culturally, this region is one of the world’s five identified Blue Zones, which means it's an area with a high concentration of centenarians — people who live the longest and healthiest lives. These long-living cultures move naturally all day, connect with neighbors, and eat healthy. No wonder we already feel like we never want to leave.

Our First Sunset Surf — and Setback

My eyes squeeze shut as I plunge into the salty pool. A loud pop reverberates through the water as my left foot buckles against the ocean floor. Ouch. I stand in the shallows, grab my board, and sheepishly smile, hoping to shake off the horrible sensation. The throbbing pain hikes. I hobble toward the forest’s edge beyond the high tide and carefully lower myself to my board. A patch of the white sand is dyed red beneath my forefoot.

As I sit in this philosophical heaven, I tell myself not to panic and contort my foot to examine the gash. Swarms of pesky sandflies start to close in on my arms and legs. Is that a bone sticking out or a skin chunk from an acute wound? Did my foot go numb, or is the pain subsiding? I stand and shuffle back toward the waves to flag down Eric, who is undoubtedly having the time of his life. The softly lit ocean carries an unparalleled, mellow energy as magic hour eases the day. I surrender to the possibility that my foot is broken.

“What’s wrong?” Eric asks, as he steps out of the water.

“Everything is going to be okay. I just may have broken my foot,” I say, then impulsively apologize for diverting us away from the magnificent sunset. I don’t want to dampen Eric’s experience. Whatever this injury is, I hope it doesn’t swallow our vacation. In the meantime, my foot is a balloon and radically hurts. Eric is bummed but compassionate.

We start the short walk home, which is drastically slower due to my limp. Darkness falls fast. We turn on our headlamps to navigate through the forest back to our bungalow. “We still have seven days here. I can totally get back on a surfboard before we leave,” I say defiantly, although I’m wincing and close to tears.

For the next two days, Eric pushes his surf skills to the next level — solo. He's completely ecstatic as he runs up to me on the beach. “I made it past the impact zone to the real waves — it was terrifying!” he says. The impact zone is where the lead wave crashes, thus creating whitewater. I don’t yet fully know what Eric means by “terrifying,” but I deeply want to be out there facing those fears too. “That’s so amazing! I was trying to watch you, but couldn’t see very well. Did you catch a wave?” I ask.

“Definitely not. I ate it so hard. I got worked, but I made it out there!” he exclaims. It’s a huge step for a new surfer — and one unfamiliar with the ocean — to learn how to paddle through whitewater and past that initial crashing wave, which can catch you physically and mentally. I look down. My foot is still swollen, sore, and now purple and blue. I’m starting to worry I may never have the chance to try to achieve that step on my own.

Between Eric’s surf stints, we take a long walk on Playa Pelada, which helps loosen my foot muscles and retrain the articulation. Despite a bandage, the cut is impossible to keep clean and free of sand. I stop by the local apothecary. “Neosporin doesn’t work in the jungle. We have too many pests and plants,” the shop owner tells me when she sees the sticky ointment I applied. She instead offers a tincture for swelling and pain relief, as well as a disinfectant spray. Both remedies significantly help me heal.

The next day, I still can’t steer a surfboard with my left foot, but I pick up a boogie board. I’m so relieved to be back in the water. Free of expectations and incessantly smiling, I feel like a kid having the time of my life. I deeply believe that the hydrotherapy, salt, and joy of play will rehabilitate me. I just need to continue to surrender to the reality of not knowing what will happen.

Twenty-four hours later, I’m able to fully pop up and surf again. Right before this trip, I reflected on my year and thought about how I need to be better at surrendering to the universe. I decide to challenge myself on a shorter seven-foot board. Maybe I have a chance to catch a big wave. My foot and laceration still hurt, but I’m finally sure that my two center toes are sprained rather than broken.

On our last day, Eric and I venture out on our surfboards at daybreak. We swim in parallel, as I try to break through the impact zone. I’m repeatedly churned beneath the surface and my leash tugs me backward. I fight the water to regain distance. My body and mind begin to react to this foreign stress. My breathing starts to constrict. Stay calm, take a deep breath, you can do this. I finally make it to the top of the break, but I need to swim harder.

I want to celebrate making it to the top, but I’m so drained — psychologically and physically. It doesn’t feel safe to be out here. I let myself get pulled down with the wave and paddle seamlessly to shore. But I haven't given up yet.

When we return to the water that evening, I get pummeled by the waves. I decide to take a few minutes to reset my mind and watch experienced surfers. I tell myself I can do what they’re doing too. After 20 minutes, I head back out. In a few minutes, I make it past the impact zone.

I paddle as hard as I can, stand up, and immediately fall into a wave, which swallows me. I pop up with a huge smile on my face and paddle back toward shore. The next wave approaches fast. This time, I stick each step with confidence. I smoothly fly down the face of the curl. I ride the whitewater all the way into the beach — waving the entire time at Eric, who is watching from the sand.

I realize later that night that the secret to overcoming fear is threefold. Be patient with the process — work each day to broaden your skill. Trust your body and mind’s ability, even if it lapses. And surround yourself with encouragement. With those ingredients, I’ll be back for more.