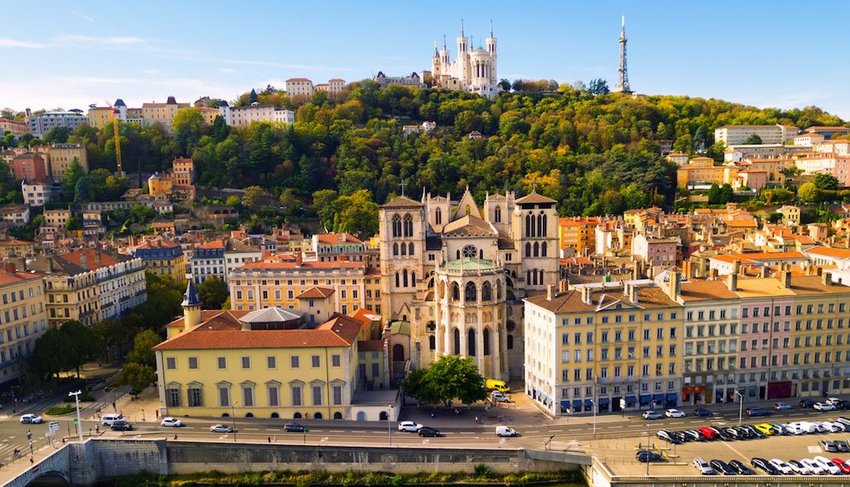 Paris is one of the most visited cities in the world — and with good reason. With picnics under the Eiffel Tower and romantic strolls down the Champs-Élysées, few places compare to the City of Lights. But France is so much more than Paris. So, why not venture out to explore cities with romantic vineyards, exquisite architecture, and pristine beaches instead? Leave Paris behind to discover five French cities that should be on your next itinerary.

Paris isn’t the only French city that boasts art museums and haute cuisine. Where the Rhône River meets the Saône, you’ll find the medieval city of Lyon. This beautiful city has some wonderful sites to explore. The Museum of Fine Arts of Lyon is dedicated to art from antiquity to contemporary, while the Confluence Museum is the place to experience world cultures. Lyon is also home to some of the world’s most beautiful churches, such as the Basilica of Notre-Dame de Fourvière, and remarkable ruins like the Roman Amphitheater. As France's third-largest city, it has the energetic atmosphere of a college town without being overwhelmingly crowded. Foodies will fall in love with its excellent restaurants, such as Restaurant Paul Bocuse. This Michelin-star eatery has been a staple in the city for 50 years and is widely regarded as the best place to dine in Lyon. And don’t leave Lyon without checking out the beautiful town square’s iconic fountain — the Fontaine Bartholdi.

Meandering through the countryside leads you to the charming storybook city of Beaune. Beaune is the capital of the Burgundy wine region, and its medieval architecture and ancient wine cellars don't disappoint. This picturesque walled village is surrounded by vineyards, so it makes sense that one of the major pastimes in Beane is wine tasting. To experience the best that the city has to offer, make a beeline to Millésimes à la Carte. This fantastic wine store offers a chance to taste the best wines of Burgundy — all by the glass. After sampling some of the best vino in France, take a romantic stroll along the ancient ramparts that border the city and you’ll get a sweeping view of the French countryside.

Sun seekers should head south to Nice, a city for beachgoers and history buffs alike. Its beautiful Mediterranean shores make it the main port town of the fabulous French Riviera. Take a stroll along the Promenade des Anglais and you’ll have your choice of great restaurants, beach clubs, and bars. Nice is also famous for its spectacular architecture, ancient ruins, and churches — all of which are hidden in the labyrinth of streets in Old Town Nice. The onion-shaped domes of the St. Nicholas Russian Orthodox Cathedral are breathtaking, too. For sweeping panoramas of the city, climb to the top of Castle Hill. And don’t miss the Matisse Museum, where you can learn all about the life of the famed painter. He did some of his best work in his hometown.

The gem of the Alsace region is the gorgeous town of Strasbourg. Since Strasbourg shares a border with Germany, it has a very unique culture, which is influenced by both countries. Strasbourg's Alsatian cuisine is similarly special. Dishes couple the heartiness of German fare with the delicacy and extravagance of French cuisine. Take a stroll down the lovely canal for views of colorful townhouses before popping into one of the Alsatian pubs or winstubs (wine bars) for some traditional comfort food like bacheofe — an Alsatian meat and vegetable stew. For an extra-special treat, visit Strasbourg during the holidays. Its famous Christmas markets are a pure delight. The Cathedral of Notre Dame also comes alive with holiday joy.

For a taste of Britain, check out the seaside province of Brittany. Even though Brittany is not a city, this must-see region has a rich Celtic history and distinct identity since it shares much of its heritage with Cornwall and Wales. Brittany is one of the six Celtic nations and still has its own language (called Breton). The region didn’t become French until 1532. It's full of quaint little villages such as the walled city of St. Malo, with its Romanesque and gothic-style cathedrals. The oyster-rich port of Cancale is a favorite spot for visitors, too. And Breton cuisine is amazing, with plenty of seafood and crêpes on the menu.