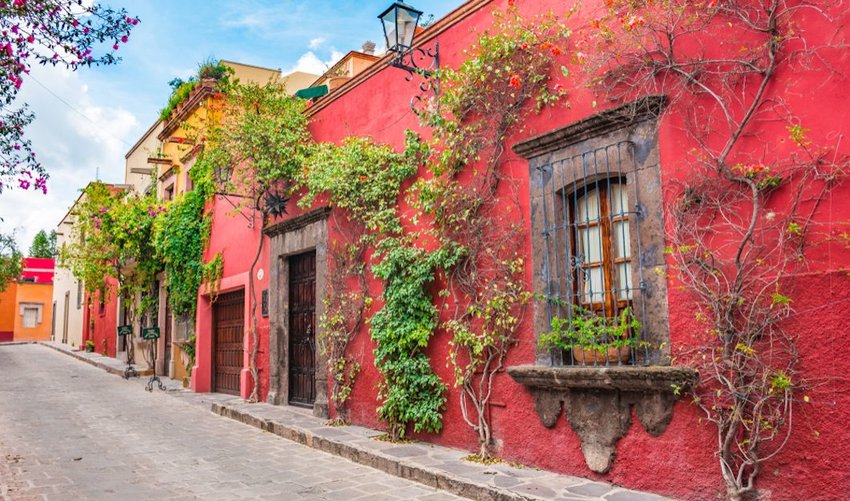 6 Dreamy Cities in Mexico That Will Spark Your Creativity

Many people know Mexico for its beautiful beaches, spicy food, and smooth tequila. But beneath the sunny surface is something deeper — a sort of magic that can be found within the country’s artistic communities. These parts of Mexico hum with innovation and expression and allow artists to thrive in cities across the border. From colorful city architecture to local, hand-crafted goods, Mexico celebrates all forms of creativity. Next time you’re in need of a dose of inspiration, forget the resort towns and visit one of these creative Mexican cities instead.

Mexico City, alive with undeniable energy, is the center of the country’s creative scene. The city itself is a work of art and home to buildings such as El Palacio de Bellas Artes, with its fantastical marble facade and domed glass roof, and the Soumaya Museum, with its anvil-shaped exterior. The gardens at Nido de Quetzalcóatl are equally jaw-dropping and feature a collection of residences constructed in the shapes of animals. Museums are plentiful and diverse, too. With the Museum of National Art, the Frida Kahlo Museum, and all of the magnificent street art that adorns the city, you don't have to go far to feel inspired.

A UNESCO World Heritage Site, Oaxaca abounds with colonial architecture, a product of the Spanish who settled the region hundreds of years ago. In contrast, the city’s art scene celebrates its indigenous roots and cultural traditions, which run deep in this part of Mexico. From tapetes (handwoven and naturally dyed textiles) to alebrijes (wooden sculptures depicting mythical creatures), the city is brimming with beautifully made folk art. In addition to studios and galleries, Oaxaca is also home to a nearby artist residency, which fosters a productive space where international artists can collaborate and create.

Tulum, a small city on the Yucatán peninsula, is known for its pristine beaches, bohemian vibes, and Mayan ruins. Until recently, Tulum wasn’t on the pulse of the Mexican art scene until Art With Me* GNP started in 2018. Described as “Burning Man meets Art Basel” by Forbes, Art With Me is a multi-day arts and culture festival that serves to unite local and global communities by raising environmental awareness. During the rest of the year, you'll find artful restaurants and boutique hotels that embrace beautiful design and culinary cuisine, not to mention a collection of chic shops.

Morelia’s claim to fame is its beautiful colonial architecture. The city’s impressive pink cathedral and well-preserved streets denote an air of elegance. And just like the beauty of the city itself, the culture of Morelia is dignified. The city’s energy is very much reflected in the art scene, which could be described as traditional and high-end. Fans of historical pieces should visit the Museum of Colonial Art before heading to the city’s government building, which features a historical mural painted by renowned Mexican artist Alfredo Zalce.

As one of the largest producers of silver in the world, Zacatecas boasts a mining industry that dates back hundreds of years. In fact, it was mining, and the profits that came along with it, that allowed this Mexican city to flourish within the worlds of art and culture. Museum aficionados will love Zacatecas’ atypical offerings, such as The Rafael Coronel Museum, which contains beautifully presented masks from traditional cultures. Nearby, the impressive Museo Zacatecano holds the Museum of Huichol Indian Art and Culture, which pays homage to the colorful work of the indigenous people.

Home to both artists and expats, the mountainside town of San Miguel de Allende is an enclave of true talent. The town itself is charming and blends colorful, colonial architecture with a contemporary art scene. In addition to a renowned art school that accommodates English speakers, San Miguel’s creative offerings include daily craft and artisan markets and sculpture and painting classes for artists-in-training. La Fábrica La Aurora is a collection of art galleries, studios, and boutiques owned and operated by local artists. The space was converted from an old textile factory and is the perfect introduction to the city’s funky art scene.