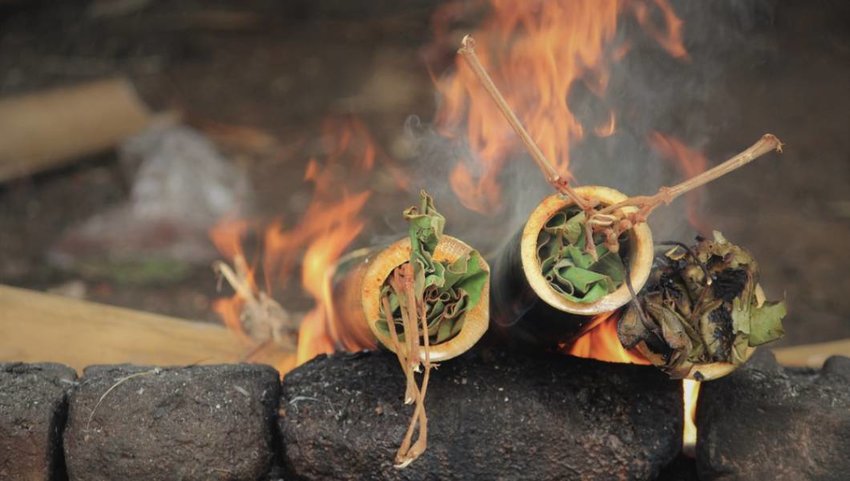 Cool Cooking Techniques From Around the World

Cooking is one of the oldest art forms known to man and the methods used to prepare food range from the simple to the bizarre. Part of the fun of exploring new cultures is trying new cuisines and learning about the intricate ways local chefs create dishes. Here are six of the coolest cooking techniques from around the world.

Cooking in a Chiminea – Mexico

The chiminea has made its way into many backyards and patios, but it has its origins in Mexico. The outdoor fire pit dates back to the 1600s when the idea was brought to the New World by Spanish explorers. The size and design of the chiminea depends on its purpose. Some are small and designed to keep you warm like a campfire. The traditional chimineas used for cooking are made of clay with a slender chimney that directs the smoke up into the air. They can stand seven or eight feet tall and are used for cooking everything from bread to elaborate meals. Try making your own wood-fired pizza or skewer a whole chicken and smoke it over the open coals.

Smoking With Wood and Tea – China

Smoking is a popular way of cooking Chinese cuisine. In the past, the Chinese survived the winter by hanging cured meat in the kitchen and burning wood in the stove to preserve the meat. Smoking cures food by driving most of the moisture out from the food, killing the bacteria, and extending shelf life. Today, the raw smoking technique is still used in dishes like camphor wood-smoked duck. The duck is brushed with malt sugar water and air-dried, followed by roasting with camphor wood shavings, fermented tea, dried camphor leaves, sugar, and flour. Another method used today is smoking cooked food to enhance the appearance and flavor of the dish like the always-popular smoked egg. Tea, sugar, puffed rice, flour, and cornstarch are put in a wok and the eggs are smoked on a steaming rack, which turns the egg white into a rich golden color.

Barbecuing in an Earthen Oven – Hawaii

Hawaiians roast and steam their food in an imu or earthen oven. To barbecue food in an imu, Hawaiians first start a fire with fist-sized stones covering the wood. Then, the intense fire heats the rocks on the floor of the pit covered with leaves to prevent the food from burning. The imu is filled with sweet potatoes, taro, chicken or fish wrapped in ti leaves (also used to make leis), and whole chickens or pigs filled with hot stones. They later cover the pit mats and kapa (woven fabric). A couple hours later, it's time to enjoy the bounty with a traditional luau.

Cooking in clay is an ancient method of preparing food and has many origins. One story is that the Roma (gypsy) people who lived in the Pyrenees would take their wagons into Spanish cities to get food. They would buy game or other meats, rub the meats with salt, wrap the meats in a cloth, and then form clay around the dressed meats to keep cool on the trip back. The shaped clay mold would then be thrown into the coals for two or three hours. Cooking with clay has its advantages. It’s porous, so it circulates the moisture and heat through the meat and can withstand high temperatures. As the heat increases, the meat starts to release water and cooks in its own juices, so no oils or fat need to be added. This cool cooking method will turn out a healthy, all-natural, juicy dinner. Today, clay pots serve the same purpose and prepare amazingly moist meals.

Throughout Southeast Asia and in many other tropical regions around the world where bananas grow, banana leaves are a common way to cook and and serve food. They’re used to wrap marinated fish or meat in order to seal in moisture and infuse the food with an aromatic, grassy flavor. In Southeast Asia, sticky rice is wrapped and steamed in banana leaves and in Thailand, a dish called hor mok, a savory, coconut fish mousse, is steamed in the leaves. Banana leaves are also a great food presentation technique where the leaf serves as a placemat or plate.

The Thai cook many of their dishes using natural vessels like bamboo. Khao laam is a dish made by stuffing a hollow bamboo stick with sticky rice, palm sugar, and coconut milk and sealing the end with a banana leaf. The sticks are then placed onto hot coals until all the liquid is absorbed. The rice is sweet and sticky from the coconut and sugar and also takes on flavor from the bamboo.