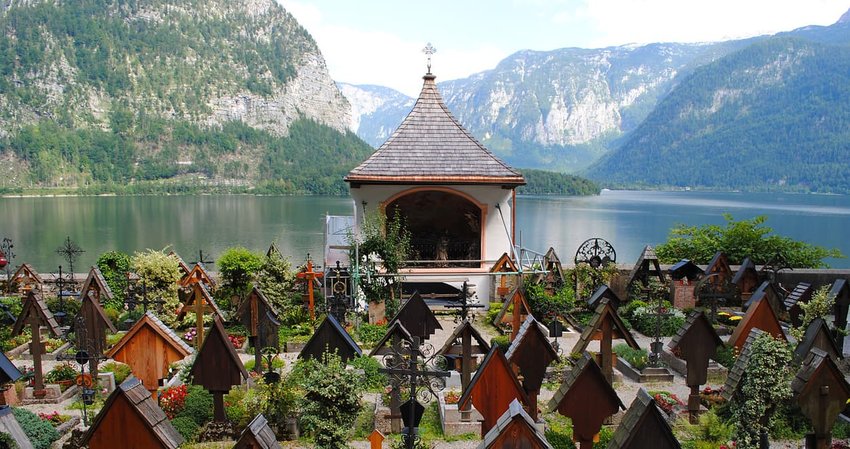 9 Cemeteries Worth Traveling For

Halloween is almost here, and if that doesn't make you want to watch scary movies about ghosts and graveyards, then we don't know what will. For the dark tourist, this season brings plenty of chances to indulge in some of the spookier parts of the world. From haunted hotels and legendary fortresses to the final resting places of the long deceased, here are nine cemeteries around the world that are worth traveling for.

Lafayette Cemetery No. 1 isn't the most visited cemetery in New Orleans due to the St. Louis cemetery's popular stories of hauntings and famous "Voodoo Queen" resident, but it's our favorite anyway. Frequent flooding of the city posed a problem to the people of New Orleans, so the elaborate, above-ground graves were born. These gothic-style structures look spooky with the overgrown greenery surrounding them. The cemetery is located under the leafy trees in the Garden District, and unlike the St. Louis cemetery, you don't need to join a tour in order to visit.

Hallstatt has long made the Instagram rounds as one of the most stunning small towns in Europe, so it's only fitting that the local cemetery offers the same unparalleled beauty. In a stunning graveyard overlooking a tranquil lake, these graves have a perfect view for eternity. The small chapel, Hallstatt Charnel House, also houses over 1,200 skulls (more than 600 of which were painted and sorted by family).


The largest graveyard in Japan is an ancient shrine, sculpture garden, and cemetery. The temple complex is set in a quiet forest and continuously burning lanterns light the way to the mausoleum of the monk who founded the complex over 1,000 years ago. Monuments range from Buddhist statues to spaceships, which are more often than not covered in emerald moss.

Certainly not the prettiest cemetery on the list, Colma, California has one of the most fascinating histories. This crazy town outside San Francisco has a living to dead ratio of 1,000 to 1. A vast majority San Francisco's dead were relocated here once overcrowding caused the cemeteries to shut down. Today, the City of Souls jokingly bears the slogan, “It’s great to be alive in Colma.”

A graveyard might not seem like a place for bright, cheerful colors, but the aptly-named Merry Cemetery in Săpânţa, Romania ignores this. Over 600 wooden crosses in the cemetery are cheerfully decorated with bright pictures and when you look closer, you'll find the life stories of the bodies they mark. With limericks, surprisingly ironic stories, and grotesque pictures, these graves air all the deceased's dirty laundry. One example reads, “Ioan Toaderu loved horses. One more thing he loved very much. To sit at a table in a bar. Next to someone else’s wife.”

At one time, Prague was a flourishing center for Jewish culture. Then World War II happened and much of that population was exiled or transported to concentration camps with entire communities and relics destroyed. The oldest surviving Jewish Cemetery, however, is a testament to the people who made the city home. With the earliest tomb dating back to 1439, this cemetery contains over 12,000 uneven headstones packed closely together — jutting out of the ground for an asymmetrical but beautiful resting ground.

Set in the emerald-green grass around the ruins of St. Andrews Cathedral in St. Andrews, Scotland, this graveyard is quintessentially Scottish. The grounds were abandoned in 1561 and the area soon fell into disrepair. Today, however, you can tour the ruins of what was once the largest church in Scotland and walk among those buried with a view of the sea.

Born from an international competition for the design of a new cemetery in 1915, Skogskyrkogården reflects the tranquil natural setting for a peaceful resting place. Named an official UNESCO World Heritage Site in 1994, the site blends 20th-century architecture with its natural environment and has inspired designers for cemeteries around the world.

Another bright and colorful cemetery, Chichicastenango Cemetery in Guatemala is steeped in Mayan tradition. Painted crosses and mausoleums symbolize who the deceased were in their life. For example, a turquoise grave indicates the deceased was a mother, while grandfathers are marked in yellow. Some graves, however, give up the tradition and are just painted in the departed's favorite color.