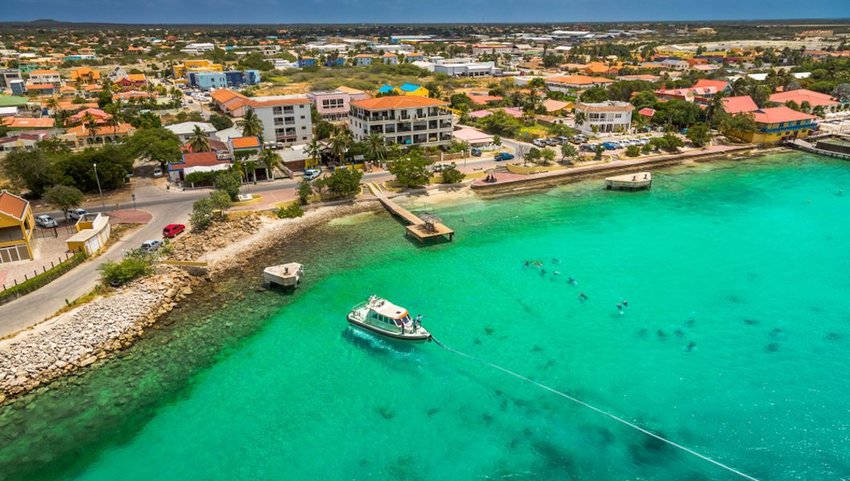 Go to the Caribbean Instead of New England This Fall

The crisp autumn air and prospect of peeping crimson colored leaves bring masses of tourists to New England each fall. But savvy, sun-seeking travelers looking to extend their summer know the tropical islands of the Caribbean make for a crowd-free fall getaway. With generally warm weather and little rainfall despite the region's official hurricane season that occurs between the months of June and November, the tropical islands experience a comfortable temperature between the mid 70s and mid 80s.

Support the restoration efforts in The Bahamas by visiting one of their stunning islands left untouched by recent Hurricane Dorian. And if you want to go beyond this island chain, you should also check out the Dutch-owned ABC Islands: Aruba, Bonaire, and Curaçao. Escape the crowds of New England by visiting the paradisiacal Caribbean islands this fall instead, and get here before the North American snowbirds arrive beginning in December.‌‌

Despite being the tiniest of the ABC Islands, Aruba holds the reputation as the most developed and touristy of the three. Lined with glitzy resorts and American-style, low-rise hotels, Eagle Beach is Aruba's star attraction. Situated northwest of the island's capital of Oranjestad, this beach is widely recognized as one of the Caribbean's favorite stretches of pristine white sands. Snap photos of fofoti trees, relax beneath the thatched beach huts, and take a dip in turquoise waters.

The tropical island experiences relatively mellow trade winds in September, which makes for a more comfortable beach basking session. In the evening, indulge in a sunset catamaran cruise on iridescent waters. Travel east on the island for a stark contrasting experience and explore the desert wilderness of Arikok National Park, a rugged landscape of natural caves and rocky cliffs that occupy roughly 20% of Aruba's east coast. Witness the island's highest peak, the 620-foot-tall Mount Jamanota, and embark on a ranger led hike through the grounds of the national park to witness some 70 varieties of cacti, wild donkeys, and turquoise-colored whiptail lizards that inhabit the land.

History lovers will appreciate the opportunity to observe ancient petroglyphs carved into its rock formations by the island's Caquetío people, Aruba's first inhabitants. Set aside enough time for a refreshing dip in the volcanic rock fringed tidal pool of Conchi Natural Pool.

The vibrant underwater world of Bonaire is a haven for divers and snorkelers who come to explore the vast 6,700 acres of Bonaire National Marine Park. Designated in 1979, the park encompasses the pristine waters surrounding both Bonaire and the neighboring islet of Klein Bonaire, extending 200 feet in depth and sharing some 90 public dive sites between the two. Fringed by colorful coral reefs, the marine park is dedicated to preserving its mangroves and seagrasses, and 50 plus species of coral and some 350 varieties of fish.

Visitors to Bonaire who prefer land activities can discover its network of rugged trails that crisscross the island or mountain bike across its desertscape that winds through Washington Slagbaai National Park. Thrill-seekers will delight in an afternoon of landsailing, racing along Bonaire's spectacular shorelines on three wheels where you can reach speeds of 25 miles per hour fueled by the year-round, steady trade winds.

Fifty miles east of Aruba is Curaçao with its lively capital of Willemstad that is reminiscent of Amsterdam. Covered by a network of café-lined waterways and carpeted by candy-colored, Dutch-inspired townhouses, Willemstad is comprised of four distinct quarters, each offering visitors a unique Euro-Caribbean experience. Wander the narrow cobblestone lanes of Punda and peruse its designer boutiques and thriving art galleries. Experience Curaçao's nightlife at the chic restaurants and trendy lounges of Pietermaai.

To escape the bustling port, tour the Hato Caves on the island's northern coast, with its network of limestone caves dating back some 300,000 years. With a knowledgeable guide, traipse the paved and illuminated trail that winds past the storied stalactites and stalagmites that adorn the Hato Caves. Budget time to stroll the area's cactus garden and contemplate the 1,500-year-old petroglyphs left behind by the indigenous Arawak tribe.