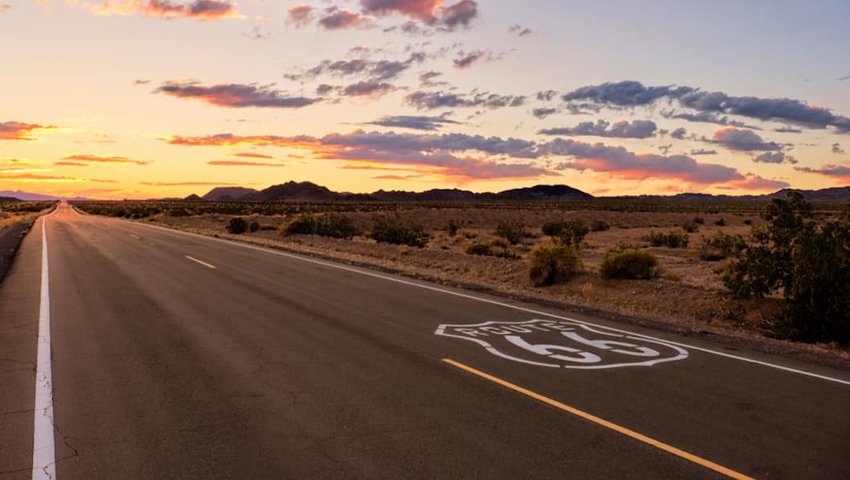 As much as we love to travel by trains, planes, boats, bicycles, hot air balloons, and our own two feet, there are few things more American than piling into a car for a cross-country road trip.  Windows down and radio turned up, the freedom of the open road isn't just a cliché.  Whether driving or riding shotgun, road trips give you the opportunity to play rubato and speed up, slow down, or change your itinerary as the whim—or road—takes you.

This summer, take the route—well, not less traveled, but best traveled, perhaps—and follow the classic national journey along Route 66.  Since its emergence as a migrant route in the 1930s, countless Americans have followed the road west from Chicago to Los Angeles, taking in some of the best of the heartland along the way.  While we've listed seven of the route's most standout road trip stops below, keep in mind that much of the charm of Route 66 lies in the perfectly ordinary: the small town diners, antique stores selling junk and treasure side by side, and fields full of cattle and corn.  Slow down, soak it up, and appreciate all that the Mother Road has to offer.

Though the road itself begins in Chicago, it was in Springfield that the route was first designated U.S. Highway 66 in 1926.  While we've got nothing but love for the Windy City, the Illinois capital provides a better introduction to the spirit of rural America that typifies Route 66.

In addition to loads of Lincoln lore, Springfield also offers the opportunity to try what may or may not be the original corn dog at the Cozy Dog Drive In.  As evening rolls around, take a minute to consider who your best friend is going to be for the extent of your cross-country all-American road trip: your (hopefully) trusty automobile.  Treat your wheels to a night out at the Route 66 Drive-In theater, where showings begin at dusk—that's about half an hour after sunset, in case you were wondering—and every night is a double feature.

St. Louis is home to a range of attractions, not the least of which is the world's tallest man-made arch.  On a Route 66 trip, though, the stop you can't miss is Ted Drewes Frozen Custard.  The family has been in the business for 90 years, and the Chippewa Street location has been going strong since 1941.  Fill up on one of their signature sundaes before checking out the history showcased in the Gateway Arch National Park, which houses the Museum of Westward Expansion as well as the Old Courthouse where Dred Scott made history by suing for his freedom in the buildup to the Civil War.

Bonus stop: Just before you reach St. Louis, check out the Chain of Rocks Bridge on the Mississippi River, which forms the border between Illinois and Missouri.  A part of the original Route 66 motorway, the bridge is now pedestrian- and bicyclist-only and is only accessible from the Illinois side.

Though its Wild West days have run their course, the Oklahoma town of Stroud was once quite the scene.  The closest place to get booze if you were coming from the nearby 'dry' Native American territories, it quickly became a hotbed of saloons and outlaws.  Like any rebellious teenager, though, it eventually grew up and may have faded from national notice altogether had Route 66 not come through town.

The Rock Cafe was built in the late 1930s using the very rocks that were displaced to make room for the road, and it has been a route icon ever since. In 2001, its owner even inspired the Pixar Cars character, Sally.  Elsewhere in Stroud, you'll see plenty of classic Route 66 signage—neon, rusted and otherwise—before continuing down the road to Oklahoma City, an hour away.

Halfway through our list, and you're halfway through the route—give or take.  The exact midpoint of Route 66 has never been unanimously decided, but the town of Adrian has as good a claim as any.  Make it official with a photo of the sign designating 1139 miles to Chicago and 1139 miles to Los Angeles, before stopping for some pie at the Midpoint Cafe.

Adrian, like many of the other nearby Texas towns, is all but abandoned.  Besides eating at the Midpoint Cafe and catching a look at The Bent Door—a former filling station and cafe whose door is, in fact, bent—there's little to do besides getting your fill of rusted cars and windmills.

Of all the towns the road has gone through so far, Tucumcari may be the most quintessentially Route 66.  Full of sights from an earlier time, you can do your souvenir shopping at Tee Pee Curios, a former gas station and market from the 1940s.  There are also a number of local museums—including the Mesalands Dinosaur Museum—to check out during the day.

After the sun goes down, though, you can hardly do better than simply walking the streets of town to enjoy all the old signs light up in their neon finery: the Blue Swallow Motel, Del's Restaurant, the Buckaroo Motel and the Odeon Theater, just to name a few.  Farther along the road in New Mexico, you'll reach Albuquerque, which is home to the longest stretch of Route 66 in any city.

In addition to all the man-made Americana, Route 66 takes you through plenty of the country's natural beauty as well.  With its jagged sandstone and desert canyons, the scenery of the Southwest is unlike anywhere else in the U.S.  Take a brief detour down to Red Rock State Park, just outside the city of Sedona, Arizona, to see some of its finest.

Red Rock is a mere hour's drive south of Flagstaff, which Route 66 passes through as it follows U.S. Interstate 40.  You can stretch your legs—and work off some of those diner meals—with a short hike on the park's trails, a network totaling just five miles.  Catch the southwestern landscape in the soft light of sunrise, and you'll likely snap some of your favorite shots of the entire trip.  Continuing west, look out for Joshua trees to add to the otherworldliness of the scene as you near the California border.

Over 2000 miles from where you started, you're finally rewarded with a view of the glittering Pacific.  There's no better place to end your journey than on the Santa Monica Pier, walking its length alongside visitors from all over the world.

Originally the first concrete pier on the west coast—but refit with wooden piles a century ago—the Santa Monica Pier is now home to an amusement park, an arcade, an aquarium, street artists, and more.  You can even try your hand at fishing, though you'll want to check the current advisory on whether it's safe to eat your catch.  If angling isn't your thing, there are plenty of food spots both on and near the pier.  After dinner, take in a west coast sunset from the top of the Ferris wheel—the perfect capstone to an all-American road trip.