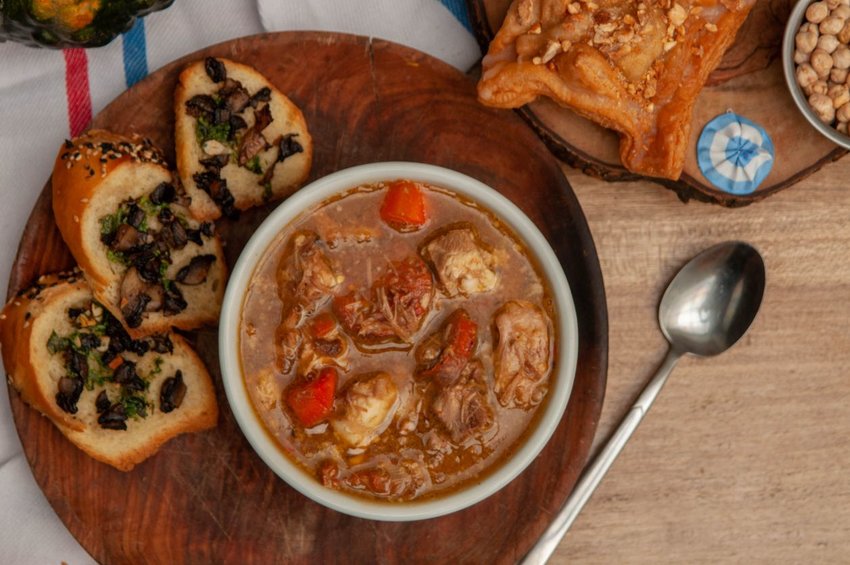 Make Locro At Home, And Experience a Taste Of Old Argentina

With wintertime in the southern hemisphere just around the corner, here in Argentina culinary thoughts are starting to drift towards hearty dishes such as meat, vegetable and legume stews. Although available year-round in restaurants, locro is most commonly served during the winter season and at formal family gatherings. Like many national dishes from around the world, this one has an interesting background and is steeped in the nation’s cultural identity. If you aren’t familiar with this belly warming plate then here’s your chance to find out.

Long before Spanish conquistadores landed in South America in the late-1400s, dozens of indigenous tribes and civilizations thrived across the Andes. They survived on a diet sourced largely from the vegetables, grains, roots and tubers available to them. Popular belief is that locro originated in the villages of this sprawling mountain range and is inspired by the culinary habits of the Incas. The name itself is a derivation of the Quechua word luqru (or ruqru); Quechua was the predominant language family of the Inca Empire.

Travel through any of South America’s Andean nations — from Colombia to northern Argentina and Chile — and you’ll find locro on the menu. In Argentina it arrived in today’s northwestern provinces of Salta and Jujuy, where Andean cultures continue to flourish, and the central-western Cuyo region before slowly gaining cult-like status throughout the rest of the country.

Being loved across such a broad geographical region, there’s naturally hundreds of recipe variations. The defining ingredients are squash, corn, vegetables, meat and spices such as cumin and paprika. Meats would have been added after the Spanish introduced the Andean villages to livestock farming. Just imagine the Incas and Europeans sat on a mountainside, eating and attempting to convey their ideologies. Today meat choices range from beef cuts and ossobuco (veal shanks) to bacon, chorizo and tripe.

Locro is not the type of dish that you whip up in a hurry. It’s a labor of love and perfect if you delight in dedicating time to chopping vegetables, seasoning, tasting and elaborating. Chefs and abuelos (grandparents) across Argentina will have spent hours, days, even years, meticulously perfecting their variations. As a rule, a minimum of 2-3 hours cooking is required but some will prepare it a day or two in advance. Doing so allows the flavors to fully mature, the vegetables to soften into a creamy texture and the meats to tenderize.

Here’s an easy-to-follow Argentine locro recipe to try at home, which includes all of the traditional ingredients. Simply switch out meats or remove them altogether to cater for your personal taste.

Once finished, the thick, chowder-like locro is spooned piping hot into individual cazuelas (ceramic casserole bowls). As it has a soupy consistency, it’s eaten with a spoon. Part of the enjoyment is stirring the stew to discover beans, corn cobs, cubes of meats and the other tasty treats that have been added. Bread, home-baked if time allows, is served on the side and acts wonderfully at absorbing the mouthwatering flavors. Those that like a little kick to their food add a generous dollop of spicy quiquirimichi sauce. This is made simply by frying spring onions in olive oil and seasoning with cumin, coriander, paprika, oregano and fresh parsley.

Owing to its association with winter and its dense consistency, a fine wine pairing for locro is a bottle of quintessential Argentine Malbec. However, if you go heavy on the quiquirimichi then the aromatic and fruity characteristics of a Torrontés elegantly balance the spicy sensations.

Argentines are a patriotic bunch, and the eating of locro has close ties with the May Revolution Day of May 25. This was the final day of a week-long series of negotiations in 1810 that saw the Spanish relinquish their control of Argentina, Bolivia, Paraguay, Uruguay and areas of Brazil. It also led to the establishment of the Primera Junta, which was the first patriotic Argentine government. A national holiday regardless of what day of the week it falls on, May 25 is an opportunity for families to convene and indulge their hunger around the dinner table. Corks pop, wine gets poured and soulful conversations erupt. Chowing down on steaming bowls of locro evokes memories of both those that roamed the land hundreds of years ago and the heroes that paved the way for an independent nation.