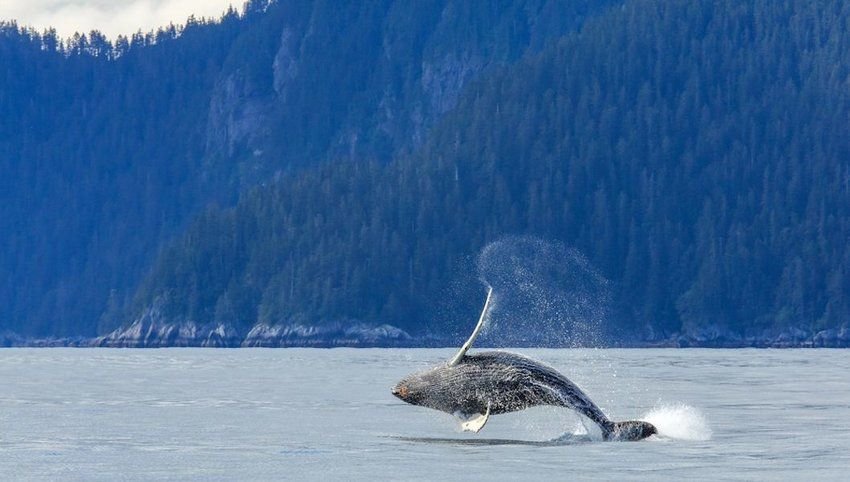 6 Incredible Animal Migrations in the U.S.

There’s something primeval and awe-inspiring about witnessing nature on the move, and over the eons, animals have developed unique migratory routes. Witnessing these migrations in person may be a once-in-a-lifetime experience. Here are six incredible animal migrations in the U.S. you don't want to miss.

If you happen to be traveling along the Platte River in Nebraska in March, you’ll probably hear the rattling bugle calls of sandhill cranes coming to roost. In fact, nearly 80% of the 500,000 cranes in the world will migrate to Nebraska from Mexico, Texas, New Mexico, Arizona, and California — and they’re not alone. Tagging along are millions of migrating ducks and geese who rest in the neighboring waterways. The cranes gather by the thousands in the cornfields to rest and refuel as they prepare for the grueling journey to breeding grounds in Canada, Alaska, and Siberia. They show up in late February, peak in mid-March, and are gone by mid-April.

The Best Way to See the Migration: The cranes are best seen from the road. You can get reasonably close to the flocks for some great photos, but the birds will scatter if you get too close. Take a tour from Rowe Sanctuary and you’ll go out along the river at sunrise or sunset to watch this amazing migration.

There are few things in nature as beautiful and graceful as a fluttering monarch butterfly. Multiply that by the thousands, and you'll have a fantastic display of color as the monarchs migrate from all across the U.S. to the West Coast in California and Mexico each fall. This massive movement of butterflies is one of the most spectacular natural marvels in the world.

One of the world's most massive animal migrations is by the caribou of the Arctic. The herds are so large that if you're close enough, you can literally feel the ground shake. In Alaska, there are three major herds with over half a million caribou. The largest is the Western Arctic herd which contains over 350,000 caribou that migrate through the Kobuk Valley National Park and travel north in the spring and south in the fall. Pregnant females and yearlings lead the migration through the Brooks Range Mountains in May and June and are followed by bulls and calves. The largest populations can be seen in late June.

The Best Way to See the Migration: Although the caribou cross through remote tundra near the Arctic Circle, there are places you can go on a caribou safari. Make your way to the Iniakuk Lake Wilderness Lodge to witness caribou migrating past your front porch. The lodge is in the wilderness of the Brooks Mountain Range and is close to Kobuk Valley National Park.

There’s no mistaking the long and distinctive nose of the male elephant seal, and the northern elephant seal migration is a wonder to witness. The seals spend most of their time at sea and then head to land to breed and molt. Since it's next to impossible to track them in the open water, it’s when they land on the shores of California that you’ll be able to witness this incredible animal migration. They feed in the open ocean as far away as Alaska and Hawaii and return to their breeding grounds along southern California and Mexico in December. The adults come back again to molt anywhere from April to August.

The Best Way to See the Migration:  There are a few rookeries in California with large populations of elephant seals. The best spot is the Piedras Blancas rookery near San Simeon where 15,000 seals post up. The Elephant Seal Overlook is another fantastic place to spy on the antics of the Drakes Beach seal colony at the Point Reyes National Seashore.

The Pacific salmon migration illustrates the circle of life like no other. The salmon are born in freshwater, migrate to the ocean, and return to the same streams where they were born to lay their eggs. It’s a brutal journey upstream and only a small percentage of salmon live to see the spawning grounds. The males that survive the journey are haggard because they don’t eat after they leave saltwater and the females are bloated with a pound or more of eggs.

The Best Way to See the Migration:  The freshwater streams found along Oregon’s Columbia and Willamette Rivers will see the salmon return between March and June. Salmon spawning in Alaska can generally be seen between May and August. The specific timing is unique for each river and for each species. Check out the Alaska Department of Fish and Game website for more information.

Humpback whales are famous for their acrobatics as they jump (breach) or tail-slap the water. The whales migrate between cool-water feeding grounds and warm-water breeding grounds, and these 40-plus-ton gentle giants have the longest migration trek of any mammal. The good news is that you can witness this incredible migration from both the West and East Coasts of the U.S.

The North Pacific humpbacks call the Hawaiian Islands home between November and May with peak populations showing up between January and March. They make the trip from southeastern Alaska.

The Best Way to See the Migration:  The best way to get close to the North Pacific humpbacks is by going out on a whale-watching tour. If you are in Hawaii and want to try spotting them from shore, check out these top 10 places to spot the whales. In Alaska, Glacier Bay National Park is an ideal place to see humpback whales. Tours run between June and early September.

The North Atlantic humpback whales move between the Caribbean and the northern Atlantic. Breeding areas are populated between December and April near the Dominican Republic and Turks and Caicos. The summer feeding areas range from Greenland to New England and happen between May and November.

The Best Way to See the Migration:  The best spot to see the North Atlantic humpbacks in New England is catching a whale-watching tour to the Stellwagen Bank National Marine Sanctuary. Tours run between May and October.