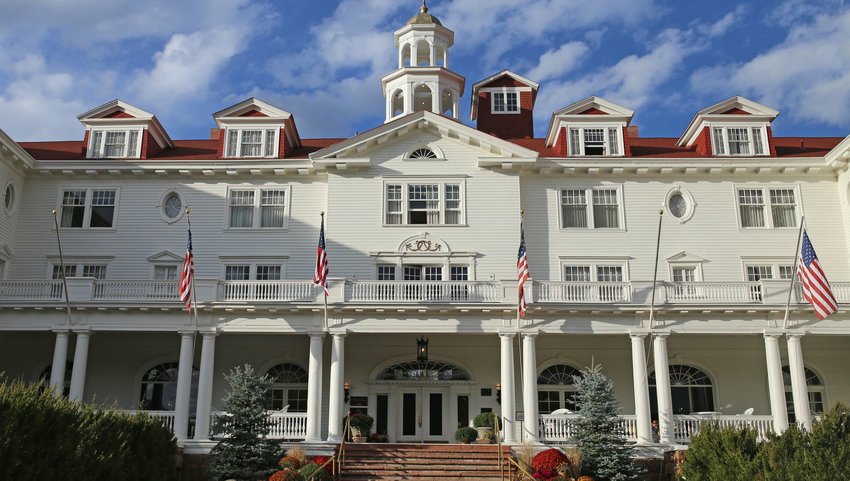 Is the Stanley Hotel Haunted Enough to Scare a Ghost Skeptic Into Believing?

I don’t believe in ghosts. My reasoning is common enough — with everyone carrying a camera at all times, wouldn’t we have definitive proof by now? — but the feelings behind that lack of belief may be less so. Not unlike Agent Mulder from The X-Files, I want to believe. After all, the alternative is much more frightening: we’re all alone on this plane of existence and there’s nothing beyond the veil.

What I do believe in are horror movies. They aren't "real" either, but the thrills they produce certainly are — there's something uniquely exhilarating about watching Mia Farrow shout "all of them witches!" in Rosemary's Baby, clenching your teeth as Michael Meyers stalk his victims in the Halloween franchise, and helplessly looking on as those doomed film students record their own unraveling in The Blair Witch Project.

So I did what any reasonable person would do: booked a stay at the Stanley Hotel, which famously served as the inspiration for the Overlook Hotel in Stephen King’s The Shining. (It’s also where the 1997 miniseries was filmed, but not Stanley Kubrick’s classic adaptation.) And I didn’t just book any room — no, I splurged on one of the Spirited Rooms, which are said to be haunted and carry an appropriately terrifying price tag.

First opened on July 4, 1909 and located in scenic Estes Park, Colorado, the Stanley avoided infamy for the first seven decades of its existence. That changed with the 1977 publication of The Shining, the idea for which came to King during a one-night stay in room 217 three years earlier. “Hotels are superstitious places,” he wrote in that horror classic, and it's doubly true of the Stanley — with its creaky floors and long corridors, there’s an energy to it rarely felt elsewhere.

Upon my arrival, which came at the height of elk mating season in early October, I was handed the key to room 401 as well as a sheet of paper informing me of what I was getting myself into. Here, in its entirety, is the text — nay, warning — that greeted me:

A male ghost, who some believe to be Lord Dunraven, is reported to be in this room. Although he never visited the hotel in his life, as it was built 20 years after he left Estes Park, it was built on land he once owned. In the closet, women feel their hair being played with, an arm around their shoulder or waist, or a hand moving up the back of their leg. Men don’t feel particularly welcome in this room sometimes, as they have felt someone is pressing them into bed or their jewelry disappearing. This was the room where Jason of the “Ghost Hunters” television show had his drinking glass, which was on the night stand, implode while he was sleeping. The closet door also opened and closed on its own.

Entering my room after slowly making my way up two different staircases, I was met by an almost unsettling silence — the kind that somehow seems loud despite being the opposite. The room showed its age both in the off-kilter design and old-fashioned furnishings, while the closet that Lord Dunraven supposedly haunts is just to the right of the door and contains some not-so-spooky items. Across from the bed is a small room, the entrance to which dips down just enough to make you trip the first time you cross the threshold, with two chairs and a lovely view of the courtyard.

As it turns out, all of the Spirited Rooms other than 217 are on the fourth floor, whose reputation is owed entirely to King's experience. The entire level used to be an attic where children, their nannies, and female employees stayed; how that translates to a higher level of paranormal goings on is for the experts to say.

After a late dinner, I took to walking the hallways and soaking in the atmosphere. It was creepy to be sure, but not enough to make me a believer — say what you will about energy and vibes, but this mostly felt like an old hotel whose residents were all firmly in the "living" category.

Two strange things did happen during the night, however.

The first was easy enough to explain away: my window opened and closed by itself. This was jarring in the moment, not least because I was getting ready for bed, but clearly the result of wind on a chilly night.

The second was...less so. As I was in that strange state of half-sleep, close to dreaming but not actually aware of it until after the fact, I was abruptly woken up by the sound of someone breathing just a few inches from my face. A rational person would say that I was hearing myself and the only reason I noticed at all is because I was in a state of heightened awareness, if only on a subconscious level. But a person being woken up by strange sounds in a haunted room at 1:48 in the morning isn’t especially rational. I’ll admit to having been spooked enough to turn on the lights and look around, heart racing, before falling back asleep. Well played, Lord Dunraven.

The question I kept asking myself the next morning was whether I would have been as unsettled had the same thing happened in the comfort of my own bed. Probably not: being in a quote-unquote haunted space primes you to think a certain way, looking for things that may or may not be there, and reaching conclusions before you've gathered the evidence necessary to support them.

Which isn't to say that it wasn't frightening in much the same way as a horror movie. I still may not believe in ghosts, but I’d like to believe that I can still be persuaded.