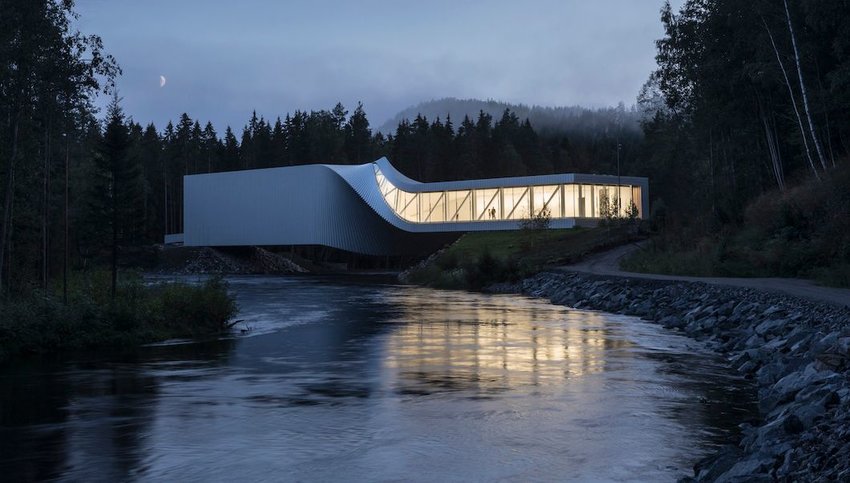 A Bridge That's Also an Art Museum? Only in Norway

You've been on bridges and you've been in art museums, but have you ever been in both at the same time? You can now thanks to the Twist Museum, an off-kilter bridge in Jevnaker, Norway that houses contemporary art. Add how striking the building itself is to the equation and a trip to the Norwegian hinterlands looks increasingly necessary.

“The Twist is a hybrid spanning several traditional categories: It’s a museum, it’s a bridge, it’s an inhabitable sculpture,” Bjarke Ingels, founding partner and creative director of the Bjarke Ingels Group, says of the space. “As a bridge it reconfigures the sculpture park turning the journey through the park into a continuous loop. As a museum it connects two distinct spaces — an introverted vertical gallery and an extraverted horizontal gallery with panoramic views across the river. A third space is created through the blatant translation between these two galleries creating the namesake twist.”

The sculpture park he's referring to is Kistefos, the largest sculpture park in Europe, which is situated alongside the Randselva River a little more than 40 miles outside the capital of Oslo. BIG is a kind of sculpture unto itself, making it as admirable in form as it is in function.

Among the artists whose site-specific installations can be found at the Twist are Olafur Eliasson, Anish Kapoor, and Yayoi Kusama.