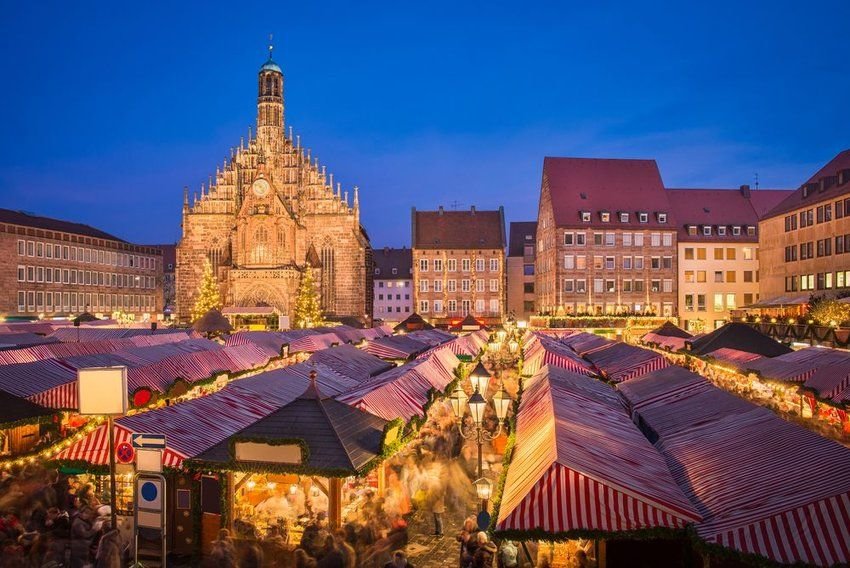 9 Destinations with the Most Christmas Spirit

The further we get into December, the more impatient we become for the holidays. If you are looking for a destination with bags of festive cheer then you’ve come to the right place. From fairytale European cities to the supposed home of Santa Claus, these are the places with the most Christmas spirit. Even Ebenezer Scrooge would get excited about them.

Visiting Denmark’s capital city is like setting foot in the scene of a fairytale at any time of the year, but come the Christmas season it exudes yuletide spirit and the nation’s famed hygge coziness. Christmas markets pop up all over the city, with stands selling cute handicrafts and serving glögg mulled wine and æbleskiver apple-based snacks. The 170-year-old Tivoli Gardens amusement park is perhaps the best place to soak up the magical atmosphere, with an eye-watering display of lights, attractions, and Christmas cheer.

Brits are on a par with Americans for getting into the festive spirit and you’ll find families adorning their houses with lights and cheerful decorations in the smallest villages and biggest cities. The season kicks off with the Regent Christmas Lights Switch-On in mid-November, from which point London becomes a wintery wonderland. Carnaby Hyde Park, Leicester Square and the South Bank are but a few of the places that host spirited holiday markets. Be sure to go ice skating at the Natural History Museum and Tower of London.

If you want a taste of European-styled Christmas without straying too far from home, head north to Quebec’s biggest city. Things get started with the 70-year-old Défilé du Père Noel (Santa Claus Parade), which features a trail of flamboyant floats and marching bands led by Santa Claus himself. Throughout December, there’s firework displays, markets, and spectacular street illuminations which add some flair to the otherwise dark and frigid winter.

Hundreds of Christkindlmarkt spring up on historic town squares all over Germany and present the chance to shop for crafts and sample seasonal treats. One of the oldest is the Nuremberg Christkindlesmarkt, on the city’s stunning Hauptmarkt. It dates back to the 1600s and begins every year with the parading of the Chirstkind (Christ child, or holy cherub) from the Church of Our Lady. Delight in the chance to shop for Franconian brandies, jams and wool clothes and sample tasty treats like bratwurst, gingerbread and mulled wine.

If you are looking for the extravagant, larger-than-life Christmas experience then New York will deliver. Arriving in the Big Apple in November and December is like stepping into a scene from Home Alone and the Miracle on 34th Street. There’s the enormous Rockefeller Center Christmas Tree and its ice skating rink. There’s the extravagant Sixth Avenue decorations and the over-the-top house ornamentation in Brooklyn’s Dyker Heights neighborhood.

Christmas comes but once a year in most places but in this small Alaskan city it is celebrated all year long. You can have fun discovering aptly-named streets such as Blitzen Drive, Kris Kringle Drive, and Santa Claus Lane; keep an eye out for the candy cane-style streetlights. Santa Claus House is packed floor to ceiling with ornaments, souvenirs and letters written by children for Santa. Visitors of all ages will love the ice sculptures and slides of the Christmas In Ice festival.

Head to the snowy wilderness of Lapland to visit the believed home of Santa Claus. Alike North Pole, Rovaniemi has year-round Christmas fun and Santa and his elves greet you at the Santa Claus Village. There’s reindeer to meet, the real Santa-spotting sleigh rides and the whimsical Snowman World, an ice hotel with igloos and an ice bar. Adding to the mysticism is the opportunity to observe the enchanting Northern Lights. Maybe you’ll see Santa and Rudolph fly overhead.

Few places in Asia do Christmas better than Tokyo. Think exuberant decorations in department stores and excessive street lights that rival those of London and New York. Among the best places to experience the light displays are Omotesandu Street, the Roppongi Hills area and Tokyo Station. You’ll be forgiven for thinking that you are vacationing in Germany at the Tokyo Christmas Market. Grab a hot chocolate or Bavarian beer and listen to the cheery melodies of a German choir.

With its oldest Christmas market originating in the 1200s, Vienna has had plenty of practice to perfect their festive spirit. The Viennese Dream Christmas Market sets up in the shadow of the resplendent neo-Gothic Vienna City Hall. Kids can take part in cookie and candle-making workshops inside the hall. Winter im MQ combines curling and other games with punch consumption, market stalls  and DJs. There’s carol concerts, classical music recitals and performances by the Vienna Boys Choir and Wiener Philharmonic Orchestra, too.