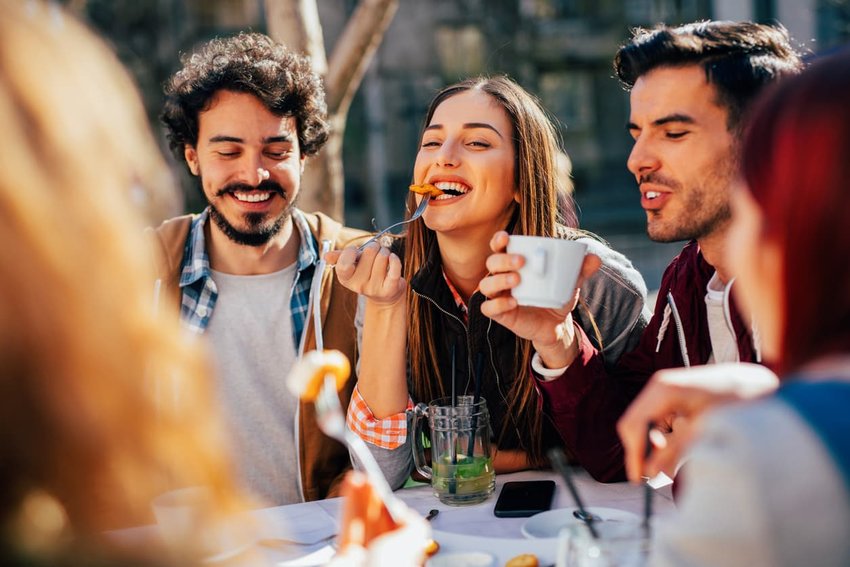 9 Adventurous Foods You Need to Try Before You Die

If you are going to take that trip of a lifetime, you can't do things halfway. Don’t be the one who ends up at McDonald’s in Cape Town or a Pizza Hut in Tokyo. Take a chance and try your hand at what local bites are on the menu. What may seem bizarre to you, may well be a local delicacy.

For those of you with a little “taste” for the strange and exotic, here is a selection of weird and wonderful dishes that have to be on your foodie bucket list. So, sit back and squirm as you explore the 9 adventurous foods you need to try before you die—if you have the stomach! 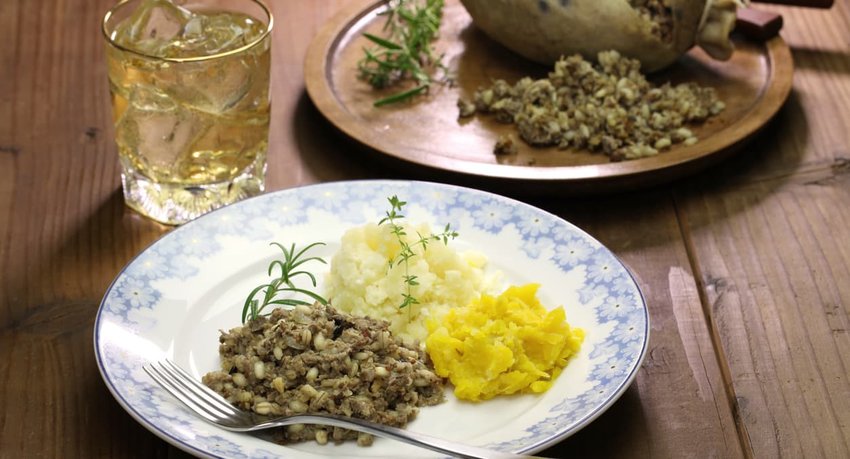 Haggis is the national dish of Scotland. It is a kind of pudding (don’t think Jell-O here) made from the liver, heart, and lungs of a sheep. The ingredients are minced and mixed with beef or mutton suet and oatmeal and seasoned with spices. If you want to eat authentic haggis, the mixture is crammed into a sheep’s stomach and boiled. It may not sound the most appealing, but Haggis is a cheap and healthy dish that you have to try with “neeps and tatties” (turnips and mashed potatoes). A wee dram of scotch is also customary, so don’t miss a chance to order this adventurous dish during a visit to the Arcade Bar in Edinburgh. 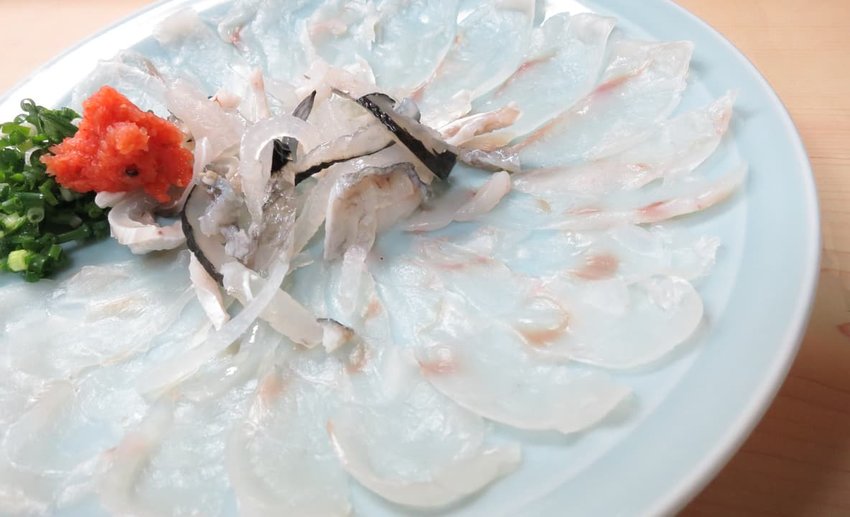 You really have to be a daring diner to try this delicacy of Japan. Fugu is the culinary name given to the Blowfish and the Japanese devour 10,000 tons of this poisonous fish each year. Fugu is served in wafer-thin slices and to be eaten safely must be prepared by an expert chef. There is enough toxin in one fish to kill 30 people. But don't let that deter you - the Japanese chefs have perfected cooking this delicacy. The mild-tasting fish has become so popular, farm-raised Blowfish is now on the menu. This is good news for the less adventurous because these fish lack any traces of the toxin, and therefore any risk to you. If you want to combine luxury cuisine with a high-stakes gamble, ask for fugu the next time you belly up to the sushi bar at Tora-fugu in Tokyo. 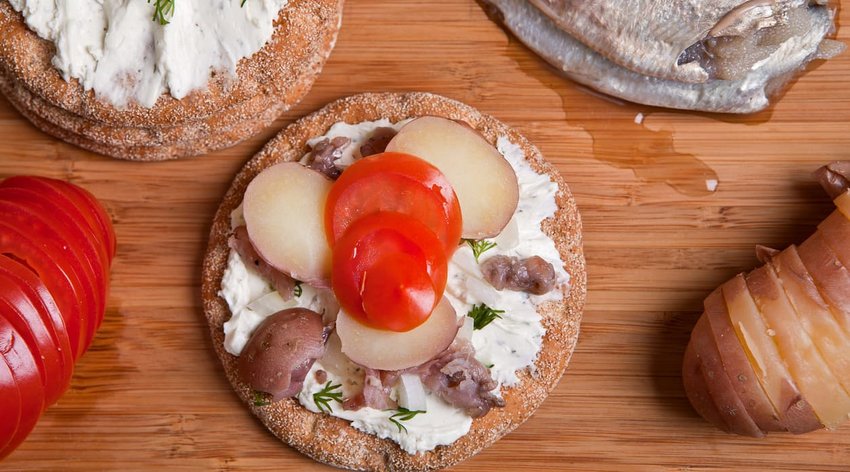 Before you turn up your nose at this adventurous dish, read-on! Surströmming is Swedish for "sour herring " and comes from the nearby Baltic Sea. The herring are fermented for months to stew in their own bacteria and this process creates rather smelly acids. They use just enough salt to prevent the fish from rotting, but don't be scared! This food preservation technique has been around for thousands of years. The real fun is cracking open the can of Surströmming yourself. Don’t worry if the can has a slight bulge—the fermentation process continues even after the herring is canned. But, be warned—the smell is indescribable. 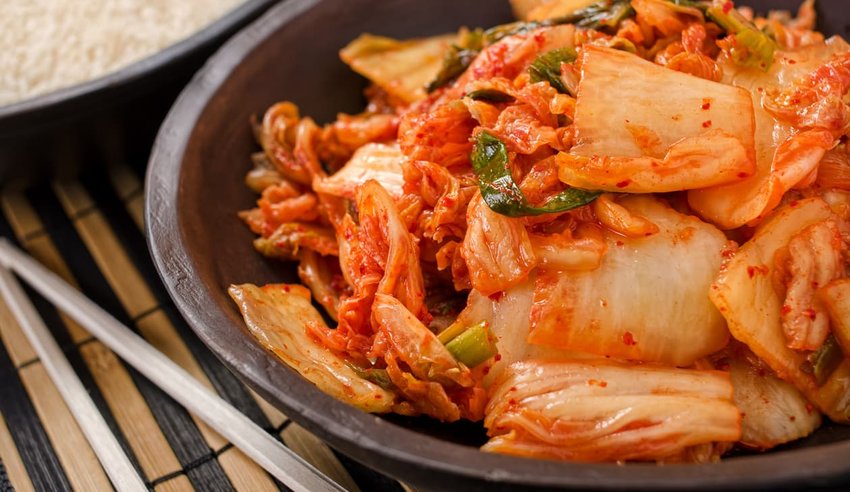 Kimchi is the national dish of both North and South Korea. It is a traditional side dish made from salted and fermented vegetables. Today, kimchi is usually made with Napa cabbage and Korean radishes with a variety of seasonings including chili powder, scallions, garlic, ginger, and salted seafood. Different types of kimchi were traditionally made at different times of the year, based on what seasonal vegetables were available. Before the age of refrigeration, kimchi was stored underground in “onggi” or earthenware crocks, to keep it cool and unfrozen during the winter months. Koreans eat so much kimchi, they say “kimchi” instead of “cheese” when taking pictures. This dish is also one of the oldest health foods around and is part of a high-fiber and low-fat diet. If you dare to try kimchi, just think of it as coleslaw with a pong. 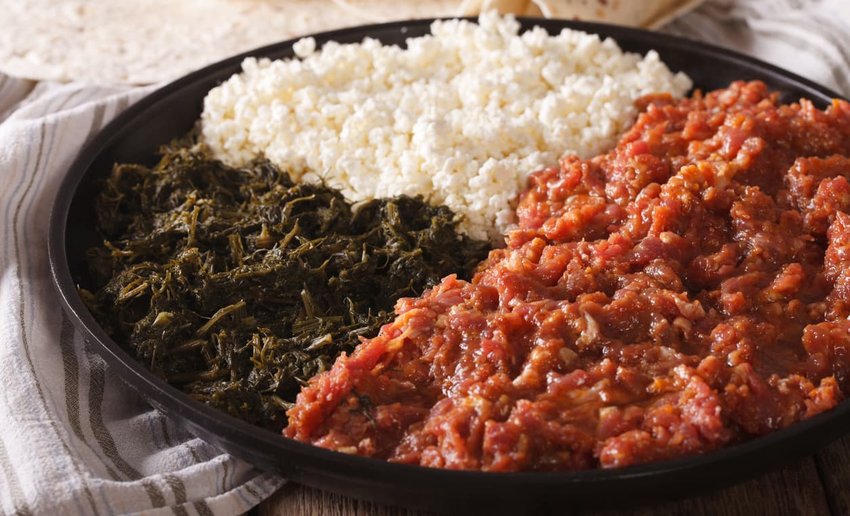 If you like your beef on the rare side, then you will want to try this Ethiopian dish. Kitfo is like a hamburger, only raw, filled with spices, and eaten with a spongy Ethiopian sourdough bread called injera. Kitfo is one of the most praised foods in Ethiopia and it is an incredible experience your taste buds will not soon forget. This highly-prized dish can be prepared in several ways, but is usually marinated in spices or rolled in chili powder and butter. If you need it cooked just slightly, then it's called lebleb. Why do they eat raw meat? Tradition has it that warriors would kill and eat the animal raw to save precious time. It also reduces the chance that their campfire would be spotted by enemy soldiers. 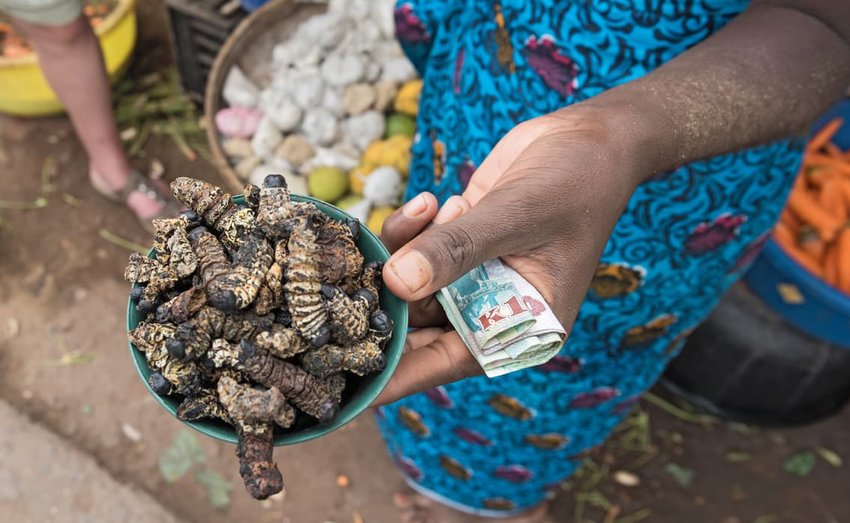 No, you are not in a food challenge in the latest season of Survivor. Mopane worms are a staple part of the diet in rural areas of Southern Africa. For city dwellers, they are considered a delicacy because they are much harder to get. They can be eaten dry, like a crunchy potato chip, or cooked and drenched in a variety of spicy sauces. The way that the worms are harvested can be a bit much for the squeamish, but this African culinary treat is quite tasty and very nutritious. They contain three times the amount of protein as beef and are eco-friendlier because it takes far fewer leaves to produce worms than it does grain to feed cattle. During harvest season, the porches of homes are covered with thousands of worms, laid out to dry in the hot sun. On market day, stroll up to just about any vendor and ask for a bowl of madora and you will be treated just like a local. 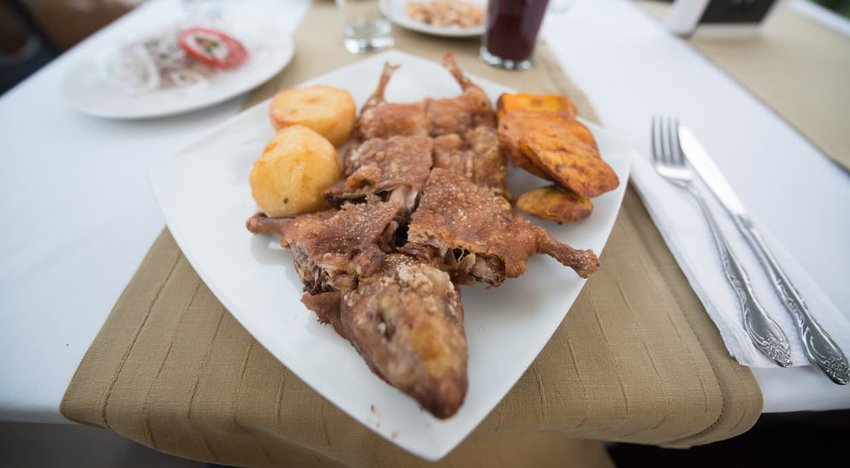 If you are visiting Ecuador, Bolivia or Peru, cuy is next on the list of adventurous foods. Cuy (pronounced kew-y) is basically a guinea pig. It is a traditional food found in many parts of South America and gets its name from a local word that imitates the high-pitched, bird-like sound the animal makes. So, why eat a guinea pig? Cuy was the main source of meat before cattle were introduced to the region. Over time, cuy became a status symbol because it meant you had enough money to eat meat and was seen as a luxury. Don’t think that a guinea pig would make much of a meal? Well these creatures are much larger than the guinea pigs kept as pets in North America. Cuy are usually rabbit-sized. Don’t think twice about feasting on guinea pig-it's not much different than eating chicken wings. 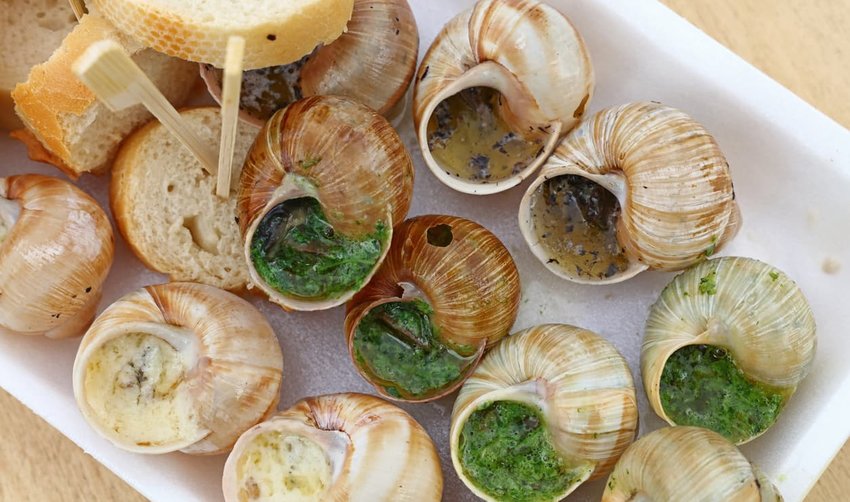 It's not a surprise that escargot is French for snail. This delicacy consists of cooked land snails and is served as an appetizer in France and Spain. You might feel a bit odd being served something that resembles a slug, but escargot is not much different than eating steamed clams or even raw oysters. The most famous recipe for preparing escargots is Escargots de Bourgogne also known as “Burgundy Snails” because the dish originated in the Burgundy region of France. This recipe is made with fresh garlic, herbs and butter and paired with freshly-baked baguettes and, what else, a glass of Burgundy. If you happen to be visiting the region in autumn, you can check out the main snail harvest. Buy them fresh or try the local recipe at 21 Boulevard in Beaune. Bon Appetit!

9. Armenia and throughout the Middle East – Khash 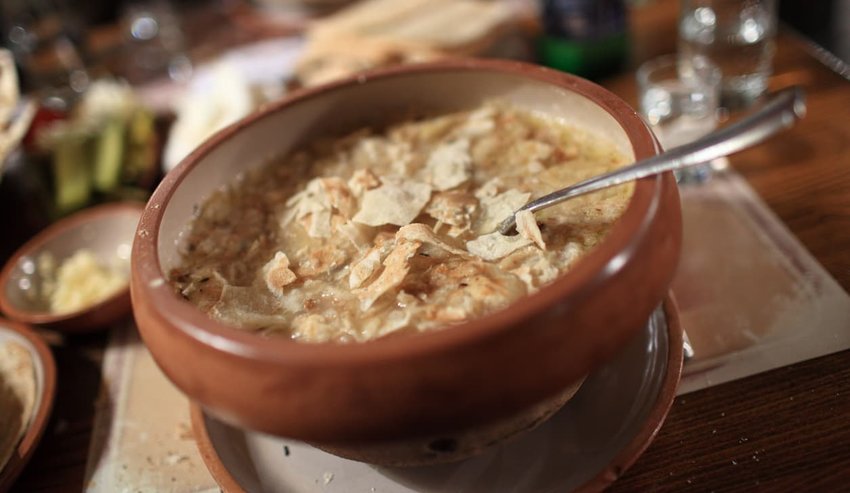 You can find this local dish on the menu of many ethnic groups living in the Caucasus region. Khash is basically a dish of boiled cow or sheep parts typically eaten as a breakfast soup during the cold season. Adventurous eaters might want to know that those parts might include the head, feet, and tripe, or stomach. Khash gets its name from the Armenian word for “to boil.” This dish is called Kalle-pache in Iran and Afghanistan. Quick translation—"head and trotter." In this dish, you will find a sheep's head and trotters (its feet) and is typically seasoned with lemon and cinnamon. Be ready to make some local friends because Khash is never eaten alone.