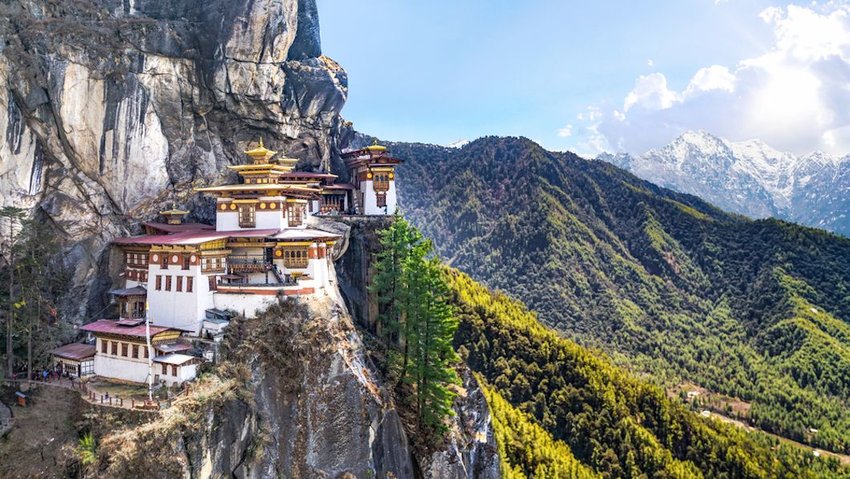 Looking for reach new heights on your next vacation? From natural wonders to manmade masterpieces, here are seven spectacular clifftop experiences that you won’t want to miss.

Standing majestically between two of Australia’s most breathtaking natural landmarks is the world’s longest uninterrupted stretch of sea cliffs. Backed by the remote Nullarbor Plain, the Bunda Cliffs rise up to heights of 390 feet from the waters of the Great Australian Bight. Made from fossiliferous limestone, the cliffs are particularly remarkable for the bleached-white look of their lower sections. One way to appreciate their beauty is to get a bird’s-eye perspective on a scenic flight. You can also drive the Eyre Highway and pull over at scenic viewpoints such as the Head of the Bight Lookout. Come from mid-May through October to see southern right whales swimming by.

The breathtaking Paro Taktsang, aka the Tiger's Nest, is a Buddhist temple built into the cliffside of Paro Valley, in the Himalayan nation of Bhutan. One of 13 smaller monasteries, Tiger's Nest is believed to have been the home of 8th-century Buddhist master Padmasambhava, also known as Guru Rinpoche. These days, visitors have quick the trek ahead of themselves to reach this spot. The climb from the valley takes about two hours, and ascends 3,000 feet to reach a whopping 10,000 feet above sea level. The trail is well-maintained but steep, passing waterfalls and offering stunning views of the surrounding mountains.

Sometime around the late 1100s, the Anasazi (Ancestral Puebloans) people made the decision to move their homes from the flat-topped hills of Mesa Verde National Park, Colorado into the overhanging cliffs below. For about a century, they etched out a village of alcove-like rooms, observatories, palaces, and temples. The most impressive dwellings sit perched in the cliffs in the southern section of the park and provide an authentic showcase of Puebloan lifestyles. Join guided tours of the 40-room Balcony House and 150-room Cliff Palace. The tunnels, passageways, and tiny doors are a far cry from what we associate as a modern-day home. Position yourself at the Navajo Canyon View overlook to see a canyon home to dozens of dwellings.

The iconic Rock of Gibraltar has long been a fixture in the Mediterranean, serving as a guardian of the passage between the Mediterranean Sea and the Atlantic Ocean. The northern of the twin Pillars of Hercules, the Rock protrudes from the Iberian Peninsula, and slopes 1,398 feet high. Primarily covered by a nature preserve, the Rock is home to incredible flora as well as some 300 Barbary monkeys, which serve as part of the tourist appeal. But beyond the mischievous inhabitants, the Rock offers fantastic views of the surrounding Mediterranean Sea, Atlantic Ocean, and even neighboring Africa. On clear days, visitors can take a cablecar to the top, and when the wind halts cable traffic, they can explore a labyrinth of tunnels deep underground.

Back in the 1300s, Byzantine hermit monks were looking to retreat from the increasing control of the Turkish in northern Greece. Their inspired decision was to establish 24 monasteries atop a group of soaring rock pinnacles formed by earthquakes and weathering. Six of the Meteora Monasteries remain active and appear to be suspended in the sky. It’s almost impossible to fathom the effort the monks gave in order to reach the pillars and transport both people and materials via rope-pulled baskets and ladders. Most are now accessible by car, although reaching the Monastery of Holy Trinity requires climbing a 140-step, rock-hewn staircase. Throughout, you can see frescoes by notable Greek artists such as Byzantine iconographer Frangos Katelanos and the Cretan Theophanis Bathas-Strelitzas.

At the southwesterly corner of Bali is another gravity-defying example of erecting a religious monument on a clifftop. Hindu devotees flock to the thousand-year-old Uluwatu Temple to pay their respects to the spirits of the sea. While the temple itself isn’t the most extravagant, its interior features splendid carvings of mythological Balinese characters. Yet, most come for the outstanding coastal views from outside. In both directions, dramatic cliffs covered in lush vegetation tower above the glorious Indian Ocean. Adding to the fun are mischievous monkeys, who take pleasure in whipping cameras, food, and sunglasses away from unsuspecting tourists. The sunsets here are some of the finest on the island too.

The Bandiagara Escarpment stretches for more than 100 miles across the arid landscape of southern Mali. Featuring sheer, 1,500-foot cliffs, deserts, and waterfalls, its natural beauty is unprecedented. However, what’s more impressive is the collection of villages and dwellings that have been carved into the cliffs. The Tellem tribespeople built them so that they could bury their dead in areas out of reach from flash floods. Since the 14th century, the dwellings have been occupied by the Dogon people. Some of them hang precariously from the cliff edges, while others easily go unnoticed as they blend in with the sandstone rocks. There are even houses with thatched roofs and homes that operate as hostels for intrepid travelers.