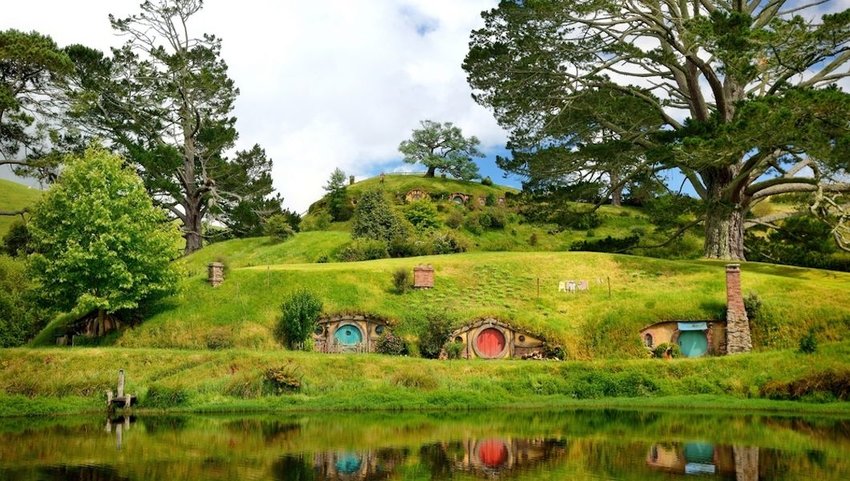 Are you a movie-buff with an interest in travel? Have you ever wanted to see the beautiful, historic, or just plain memorable settings you've seen on screen? From dramatic natural backdrops to iconic buildings, these must-visit movie set locations will add some fun to your next vacation.

Let your vacation take you all the way to Middle Earth by visiting Hobbiton in New Zealand. Fans of The Lord of the Rings and The Hobbit trilogies will find this destination bursting with goodies from the movie set. After the final film, this elaborate set was further developed into a tourist destination with the addition of The Green Dragon Inn and The Shire’s Rest (a café). Consider the Evening Banquet Tour that allows you to dine like a Hobbit (which means a lot of food), and you can even book accommodations at a nearby farm to truly feel like a Baggins.

This classic art museum is a must-see spot for fans of the Rocky film series. Movie buffs can try their hand at recreating the iconic moment where the titular character jogs up and down the steps. Be sure a friend captures it on film when you finish with a cheer. While you are in the area, check out the other famous sites Philly has to offer, such as those seen in National Treasure, Silver Linings Playbook, The Sixth Sense, and more.

The Big Apple has been the backdrop for iconic movies since film was first invented. From Central Park to Times Square, the number of sites that have made cameos in classic films are truly endless. But one of our favorites is Hook and Ladder 8, aka aka the Ghostbusters firehouse. Underrated and off the beaten path, this famous site remains a functioning firehouse, is probably ghost free, and is certainly ready for photo ops.

If you ever dreamed of attending Charles Xavier's School for Gifted Youngsters, you'll want to book a trip to Canada ASAP. Hatley Castle was used for exterior shots of the school in the X-Men films, along with other productions. The castle itself has a storied history as a military college and as a university, which you can learn more about by taking a guided walking tour of the grounds.

Horror movie fans will easily recognize Timberline Lodge as the exterior of the spooky Overlook Hotel from The Shining. The façade of Timberline Lodge will give you the perfect background for your Instagram selfies to show your friends how brave you are. Better than that, Timberline Lodge is a fully functioning hotel with restaurants and other amenities, located on a perch in Mount Hood National Forest. This makes it an ideal vacation destination where you can enjoy nature and wintry fun. Minus the haunting encounters.

How do you replicate the surface of Mars? The Wadi Rum desert (sometimes called the “Valley of the Moon”) was Ridley Scott’s choice for two films — The Martian and Prometheus. This location also served as a film set for Lawrence of Arabia and Rogue One: A Star Wars Story. Wadi Rum offers more than former film locations among its shifting red-pink sands. It also has stone arches and mountains for naturally epic views. View prehistoric carvings, or amp up your movie set dreams and visit nearby Petra, where Indiana Jones and the Last Crusade was filmed.

This small island is approximately 8 miles from the coast of Portmagee, and was the gorgeous setting for both Star Wars: The Force Awakens and Star Wars: The Last Jedi. The emerald island features dramatic cliffs and ocean views, not to mention the remnants of a sixth century monastic settlement. In addition, a visit to Skellig Michael can also bring you up close and personal with incredible wildlife including puffins and large colonies of gannets.