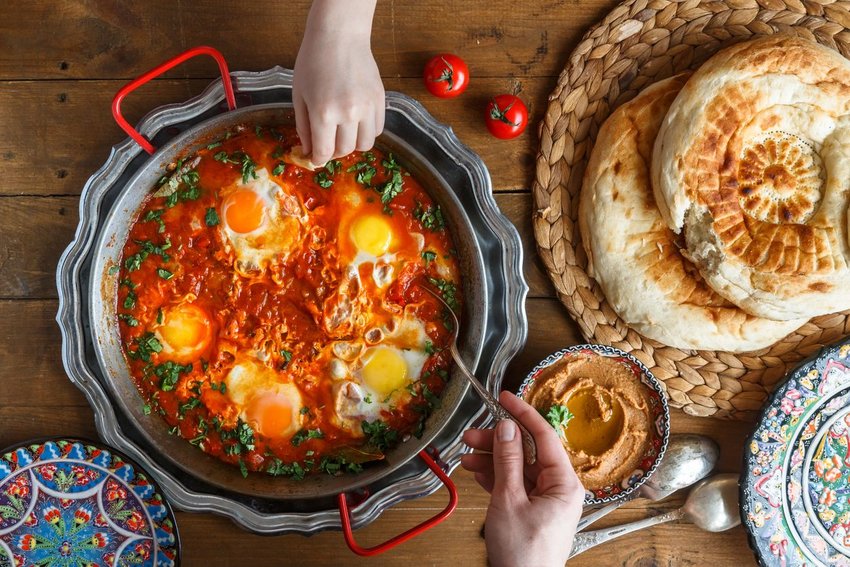 These 7 Easy Dishes Will Bring the World To Your Kitchen

Food lovers know that one of the most memorable aspects of exploring a new culture is sampling the cuisine. But while we’re encouraged to stay at home during this pandemic, foodies can continue to explore from the kitchen by cooking up some new dishes. These international favorites use simple ingredients and come together in minimal time, and can perhaps inspire your next journey.

Believed to be of Tunisian or Yemini origin, shakshuka is now one of Israel’s most popular dishes, and is a simple one-skillet meal that uses everyday ingredients. Its name is thought to be rooted in either the Arabic or Berber language meaning "mixture," and was brought to Israel by Jewish immigrants from North Africa. Shakshuka combines eggs, tomatoes, and a generous helping of spices like cumin, paprika, and cayenne for a rich flavor, and like many of the world’s greatest dishes, there are a number of interpretations depending on where in the world you are. The Israeli version usually involves eggs gently poached in a spicy tomato sauce, and is served with a thick bread like challah to mop up the sauce, whereas eggs are cooked to a scramble in Egypt. Though shakshuka is generally served as breakfast in Israel, this is a valid excuse to gorge on eggs for dinner. The sauce is made by sautéing onions, bell peppers, and tomatoes on the stovetop (ideally in a cast iron skillet), then the eggs are gently cracked into the pan, cooking until they set. Once you’ve tried shakshuka in its basic form, dress it up with your favorite spices and additional toppings.

The mention of Thailand brings thoughts of savory noodle dishes like pad Thai and sweat inducing jungle curries, and the mention of dessert seems almost out of place. But this sweet and sticky dish is consistently sold at the street stalls throughout the nation, and packaged as a ready-to-go item at supermarkets. Though a seemingly odd combination, mango sticky rice is one of Thailand’s most popular dessert items. Traditionally, the sticky rice is soaked in water and left overnight before it’s steamed with sugar and coconut milk, but for an accelerated version, you can soak the sticky rice in water and cover for 20 or 30 minutes before steaming it. Best eaten warm, top your serving of rice with fresh mangoes, and garnish with a drizzle of sweet coconut sauce and sprinkling of toasted sesame seeds. Although the dish originates from Thailand, the dessert is consumed throughout much of Southeast Asia, and can be found in the neighboring countries of Cambodia, Laos, and Vietnam.

A savory Chinese flatbread, this scallion pancake is a classic street food item found in roadside stalls throughout China and Taiwan, and frequently listed as a side dish at Chinese restaurants. Lightly pan fried for crisp edges and a chewy texture, this simple flatbread is unlike Western pancakes as it’s made from dough instead of batter. The scallion pancake is made from basic ingredients, and involves a combination of flour and water that’s kneaded until it’s smooth and elastic, then sprinkled with minced scallions. The pancake’s flaky layers are created by coiling the dough before frying on a cast iron skillet, like this versatile one by Utopia Kitchen. This treat can be enjoyed with a dipping sauce of rice vinegar and soy sauce.

Tagine refers to both the slow-cooked Moroccan stew and the cone shaped earthenware pot that it’s cooked in. The cooking vessel is traditionally made of clay or ceramic and was historically used by nomads as portable ovens that were easily placed over an open fire to make a hot meal. Though simple, a tagine is packed with bold flavors, like lamb with prunes, and chicken with preserved lemon and olives, and generously spiced with turmeric, saffron, ginger, paprika, coriander, and cinnamon. The complex flavors of a tagine are made by layering the onions and garlic, protein, vegetables, and spices, which all steam and slow-cook together in the earthenware pot. The cone shape of the tagine promotes steam circulation, which consistently bastes the ingredients of the stew to keep them moist and tender. However, if you don’t have a tagine, this aromatic dish can easily be done using a heavy pot or Dutch Oven, like this enameled cast iron one.

A fun and refreshing handheld appetizer or light meal, Vietnamese fresh spring rolls are a more healthy alternative to the flash fried version, though those are tempting in their own way. These fresh ones are sold at street stalls throughout Vietnam, and come loaded with shrimp and thinly sliced pork wrapped with rice vermicelli, lettuce leaves, a blend of fresh basil, cilantro, and mint in rice paper. But as it’s a highly adaptable recipe, vegetarians can replace the pork and shrimp with extra veggies before rolling them up. Working with the delicate rice wrappers is the toughest part of making this meal, but by briefly dipping each wrapper in warm water for about five seconds, you soften them up. Try to work atop a plastic or ceramic surface to prevent rice paper from sticking, and place your ingredients on the bottom third of the wrapper and roll tightly. These fresh spring rolls are traditionally served with a combination of fish sauce and lime juice, and another popular accompaniment is a blend of hoisin sauce, peanut butter, and soy sauce topped with crushed peanuts.

The name of this Roman dish is widely thought to have derived from the Italian word “carbonaio,” which translates to charcoal burner or coal miners. Though its exact origins remain murky, some believe carbonara was invented by coal workers who made this dish over the coal fire with ingredients they easily carried to work -  spaghetti, egg, pecorino, and guanciale, seasoned pork cheeks or neck cured for at least three months, which constitutes the authentic Roman carbonara. The coarsely ground black pepper that finishes this dish is said to resemble coal flakes. In modern variations, crispy bacon is substituted for guanciale, and the addition of cream gives the meal a sinfully creamy mouthfeel. But no matter the adaptation, freshly grated cheese is always preferred as it melts with the heat for a richer flavor.

A European influenced Japanese comfort food, tonkatsu is a panko breaded pork chop that’s deep fried to a golden brown. Done correctly, its interior is irresistibly juicy, and it’s exterior satisfyingly crunchy, and this can be reached by tenderising the pork with a mallet, and double frying for maximum crispness. Tonkatsu is accompanied by a side of thinly shredded cabbage, or can be served over a bed of steaming white rice and bowl of miso soup to make a full meal. Tonkatsu sauce, a sweet and tangy Worcester based sauce, completes the dish, and something comparable can be recreated by mixing Worcester sauce and ketchup. Switch up your meals by slicing the breaded pork and using it as a sandwich filling, or by using the same recipe to make chicken katsu.