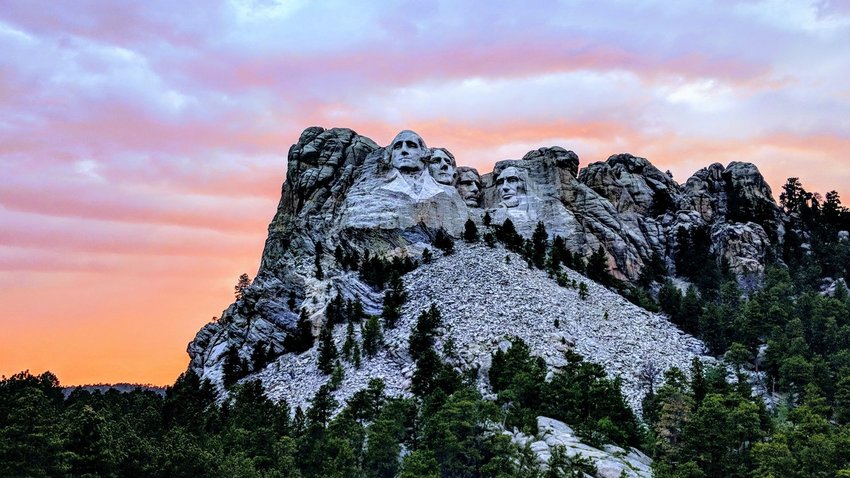 Want to represent your home state during your next Zoom meeting or virtual happy hour? We've rounded up 50 beautiful photos from all 50 states in the U.S., and we even cropped and resized them for you so they'll look as good as possible on your calls.

Built on a narrow peninsula surrounded by Lake Guntersville, Guntersville is considered one of the best fishing spots in America, and even hosted the annual Bassmaster Classic competition in 2014.

With an estimated 3,000-5,000 birds calling it home, the Chugach National Forest is said to contain as many bald eagles as the entirety of the contiguous United States.

Despite its surprisingly small size (the "monuments" are spread across roughly five square miles) Monument Valley has appeared in over 50 movies, and has become one of the most recognizable landscapes of the American west.

Lake Ouachita, formed by the Blakely Mountain Dam in 1953, features 690 miles of shoreline, or nearly as much as the entire state of Hawaii (750 miles).

The name "Joshua Tree" was coined by mormon settlers in the 1800s, who believed that the trees' branches resembled the Prophet Joshua pointing toward the heavens.

Denver is famous for its vibrant street art scene, and the mural above was created by Pat Milbery, who chronicles his colorful murals on Instagram.

Though only the top of the castle-like gate house is visible above water, the Saville Dam Tower in Barkhamsted, Connecticut actually stands at over 180 feet high.

The picturesque town of Bethany Beach has just over 1,000 permanent residents, but swells to over 15,000 in the summers as vacationers from throughout the mid-atlantic flock to its public beaches.

Miami Beach owes much of its distinctive art deco style to architect Henry Hohauser, who designed 19 different hotels, apartment buildings, and other works throughout the area.

Augusta may be best known for its namesake golf club, but don't miss Phinizy Swamp's 1100 acres of protected wetlands just a few miles away.

An uncharacteristically violent eruption of Kilauea in 2018 created new land a mile out into the sea off the coast of Hawaii, and brought an end to a continuous eruption that started in 1983.

The Boise Public Library in downtown Boise is home to the Anne Frank Human Rights Memorial, the only human rights memorial in the United States.

Prior to the completion of the Freedom Tower in New York, Chicago's Willis Tower (formerly Sears Tower) stood as the tallest building in the western hemisphere for over 40 years.

At less than 25 square miles in area, Indiana Dunes National Park is one of the smallest U.S. National Parks. But with over 2,300 catalogued species calling it home, it's also one of the most ecologically diverse.

The offset squares of the High Trestle Trail pedestrian bridge in Des Moines are meant to symbolize the "cutting and slicing" forces of erosion that formed the Des Moines river valley.

Opened in 2014, the Prairefire museum in Overland Park, Kansas uses color-shifting glass panels set against a stone facade to evoke the sight of a tallgrass prairie fire burn.

Visitors to Big South Fork can still tour the abandoned remains of Blue Heron, a former coal mining company town that has been restored as a popular museum.

The 1,300 acre City Park in New Orleans, pictured here, is 50% larger than Central Park in New York City, and is home to live oak trees that are believed to be over 600 years old.

Construction began on the Portland Head Light in 1787 at the direction of George Washington himself, and it's the oldest lighthouse still standing in the state of Maine.

The Capital Wheel opened on the National Harbor in Oxon Hill in 2014, and features over 1.6 million individual LED lights..

Every Memorial Day, volunteers plant over 37,000 American Flags in the Boston Common, representing every Massachusetts resident who gave his or her life in the armed services since the Revolutionary War.

At over 11 miles in length, the Minneapolis Skyway System is the longest continuous, climate-controlled indoor sidewalk system in the world, allowing Minnesotans to walk throughout downtown Minneapolis year-round.

Hundreds of commercial shrimping boats call Biloxi home, and many even run guided tours during the offseason.

Ha Ha Tonka State Park outside of Camdenton, MO houses the ruins of businessman Robert Snyder's European-style castle, which was completed in 1920, but burned down in 1942.

With a peak rising to over 4,000 feet above sea level, Chimney Rock in western Nebraska served as a landmark for west-bound travelers on the Oregon Trail, California Trail, and Mormon Trail.

Located on the border of Nevada and California, Lake Tahoe trails only the Great Lakes as the largest body of fresh water in the U.S., by volume.

The seaside town of Portsmouth was the original capital city of the colony of New Hampshire, but the seat of government was moved to Exeter during the Revolutionary War to protect it from the British Royal Navy.

Great Falls was chosen by then-Secretary of the Treasury Alexander Hamilton as the United States' first planned industrial city, or "national manufactory." Its waterfalls and manmade canals powered factories that produced everything from cotton and paper to the nation's first submarine, the U.S.S. Holland.

New Mexico's uniquely conical tent rocks were formed from volcanic ash over 6 million years ago, and have been weathered over time into slot canyons that are popular with hikers.

A series of 11 long, skinny "finger lakes" in upstate New York were formed by glaciers, and are among the deepest lakes in the United States.

The famous Bodie Island Lighthouse is actually the third lighthouse to stand at the site. The first leaned due to a poor foundation, and was torn down in 1859. The second  was constructed shortly after, and then destroyed by only two years later during the Civil War.

The much-photographed Fargo Theater opened its doors in 1926, and has hosted the annual Fargo Film Festival since 2001.

Upon its completion in 1927, the art deco LeVeque Tower in downtown Columbus was the second tallest building in the United States, and the fifth tallest in the world. It was recently converted into a 150 room boutique hotel, operated by Marriott.

Oklahoma City owes its lopsided skyline to the 844 foot Devon Energy Center. Completed in 2012, it rises almost twice as high as any other building in the city.

Lewis and Clark made camp for the winter on the Oregon coast after completing their historic trek across North America, and you can visit a recreation of the site today at Fort Clatsop National Memorial.

Built over a remote waterfall in rural western Pennsylvania, Frank Lloyd Wright's iconic Fallingwater House has been called the "best all-time work of American architecture" by the American Institute of Architects.

Newport is the home of the International Tennis Hall of Fame, and hosts the only professional grass court tournament in North America, immediately following Wimbledon each year.

Charleston's Rainbow Row of homes dates back to the mid 1700s, and is the longest continuous strip of Georgian row houses in the United States.

An estimated 36% of the forest in Great Smoky Mountains National Park, or nearly 200,000 acres, are estimated to predate European settlement of North America.

Every spring, millions of Texans stop by the roadside to take pictures among the state's iconic bluebonnet wildflowers.

Bryce Canyon wasn't formed by the central flow of a river, and is thus not technically a canyon. Instead, it was formed by headward erosion, where erosion causes the mouth of a river to move in the opposite direction of the stream flow.

With fewer than 10,000 residents, Montpelier is the least populous state capital in the United States. In our opinion at least, it's also one of the most underrated.

Now a state park, Natural Bridge was survyed by a young George Washington in 1750, and was purchased by Thomas Jefferson from King George III prior to the American Revolution, in 1774.

The historic Greenbrier Hotel in White Sulphur Springs, WV secretly housed a nuclear bunker large enough to house all 535 members of Congress. The bunker was decommissioned after its existence was revealed by The Washington Post in 1992, but you can still tour the facility today.

The urban core of Madison, Wisconsin is built on a narrow isthmus between Lakes Mendota and Monona. It and Seattle are the only two major U.S. cities to be built on an isthmus.

Visited by 400,000 nature lovers annually (and climbed by about 4,000), Devils Tower served as the climactic filming location of Close Encounters of the Third Kind in 1977.