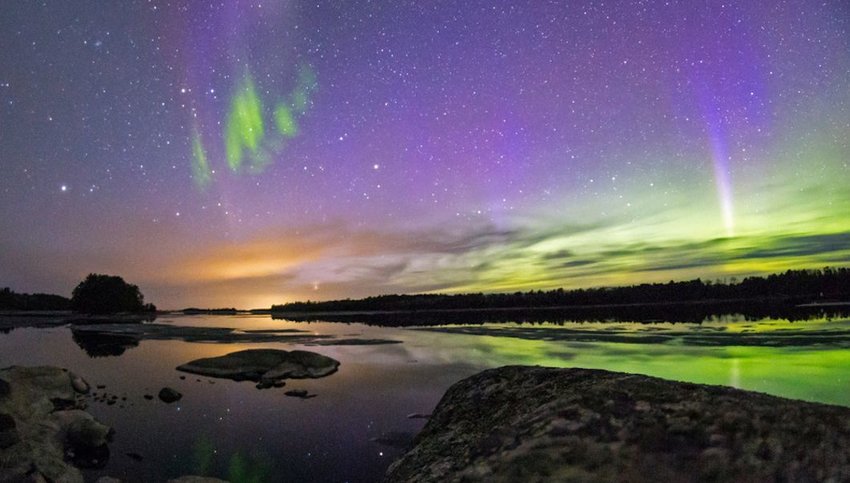 5 Surprising Spots to See the Northern Lights in the U.S.

If you haven’t had an opportunity to see nature’s exhilarating, captivating northern lights (also known as Aurora Borealis), make sure you add it to your bucket list. The northern lights occur when charged particles from the sun enter the earth’s atmosphere and collide with gaseous particles. The collisions create stunning light shows in a variety of colors 50 to 400 miles above the earth’s surface. Waves of vibrant green and pink are the most common sights, although you’ll occasionally see violet, red, blue, and yellow waves.

The best places for viewing nature’s light show are the northern parts of Alaska, Canada, Greenland, Iceland, Norway, and Siberia. The good news is you don’t have to venture to far-flung locations. You can see them from several places in the U.S. without traveling to Alaska. Here are five surprising spots to see the northern lights.

The Best Time to See the Northern Lights

The best time to view the northern lights is between October and April when the skies are darkest and clearest. Fall can be a little cloudy in the north, so December through April tends to be the best time to catch the spectacle. You can also see similar light shows called the Aurora Australis in the far southern hemisphere from April through October. The optimum time to see the lights is between 10 p.m. and 2 a.m. local time. Shows can last from 15 minutes to several hours. Avoid days when the moon is full or near full since a dark sky makes the lights more visible.

The northern lights are tied to the sun’s 11-year sunspot activity cycle, so about every 11 years, the sun’s solar flare activity increases. The increased activity causes more disruptions in the earth’s atmosphere, which results in the most spectacular northern light shows. Mark your calendars for 2025, the next year in the 11-year cycle. The Aurora Borealis doesn’t happen every day, and sometimes not for weeks or months. SoftServeNews.com and the University of Alaska track solar activity and list predictions as far out as 27 days ahead.

Alaska offers the best guarantee for seeing the Aurora Borealis, but if you can’t make it that far, here are five places in the continental U.S. where you’ll have a good chance of catching this phenomenon.

Located close to the Canadian border, Aroostook County is one of the most northeasterly viewing spots in the U.S. Head to the Aroostook National Wildlife Refuge area and reserve a campsite at one of the many campgrounds nearby (the area closes at sunset). Aroostook County is sparsely populated, so you’ll encounter minimal light pollution, which interferes with viewing the lights. Another spot worth checking out is Caribou-Speckled Mountain Wilderness.

Residents of Michigan’s Upper Peninsula are often awarded with northern light shows from their backyards. This area is one of the most northern parts of the continental U.S. with a low population and low light pollution. For a truly memorable viewing experience, watch for the lights along the shores of Lake Superior — the lake’s dark surface reflects the dazzling waves of light — giving you a double show. You’ll also have an unobstructed 180° view of the horizon. Another good viewing spot is the Headlands International Dark Sky Park in Mackinaw City.

Situated on the northeastern tip of Minnesota along Lake Superior, Cook County is home to several fantastic viewing sites. You can rent a vacation home and watch from your deck overlooking the lake. If you’re up for more adventure, you can float in a canoe in the Boundary Waters Canoe Wilderness Area and catch the show. More than a million acres in size, the area extends about 150 miles along the Canadian border with more than 1,200 canoe routes and 2,000 campsites.

Idaho is loaded with remote areas free of light pollution, so you’ll find numerous locations to catch the northern lights. The Idaho Panhandle National Forest offers many spectacular lakeview opportunities, including Priest Lake, Lake Pend Orielle, and Revett Lake. For a unique experience, head to Craters of the Moon National Monument & Preserve, an International Dark Sky Park. The ancient lava flows that give the area its name might make you feel as if you’re watching the Aurora Borealis from the moon.